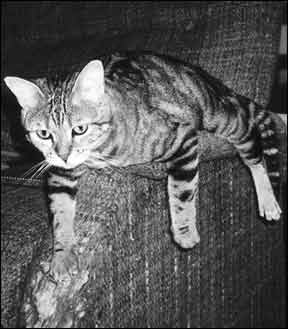 Not long after you’ve invested in new furniture, your cat picks her favorite spot. And it’s not where she wants to take a nap, either. It’s the place she’s chosen to give herself a pedicure, and soon that beautiful new sofa looks like it’s gone through a shredder.

You may notice your cat using her nails when she first gets up and stretches or suddenly stop to sink her nails into the wall-to-wall carpeting as she crosses a room. She may scratch at the end of a burst of energy after playing with her favorite toy. Fabrics, carpet, wood, cardboard — anything in your house made of materials your cat can sink her nails into can ultimately become a target for her clawing.

“Clawing helps them to shed the outer layer of their nails,” explains Katherine Houpt, VMD, PhD, and the emeritus James Law professor of Behavior Medicine at Cornell University’s College of Veterinary Medicine. In addition to having a practical purpose, clawing also serves a more esoteric function. Cats indoors and out leave olfactory and visual signals on the surfaces of whatever material they claw. “Indoors, cats leave the marks on well-traveled areas like doorways or in more obvious locations like the ends of a sofa,” says Dr. Houpt.

Although your cat may be leaving her scent on the surfaces she claws, no one is entirely sure what these marks tell other cats. “The significance is not fully understood,” says Dr. Houpt. “Cats are rarely seen investigating other cats’ claw marks.”

Clawing may be the feline version of graffiti. While it serves as a form of communication, another cat may notice it, but paint right over it with his own scent until layer upon layer builds up. “It’s such a normal behavior among cats that get along, as well as in ones that don’t — that no one’s really sure what the message is,” explains Dr. Houpt.

Of concern is the cat in a multicat household that isn’t marking with its claws. “If one isn’t marking, you know that cat isn’t comfortable in the territory,” says Dr. Houpt.

Expressing Individuality. Cats have been known to claw the carpet, upholstered furniture, cardboard boxes, wood surfaces like kitchen cabinets or table legs, anything resembling a tree or even the fake bark on an artificial Christmas tree trunk. “It’s just individual preference,” says Dr. Houpt. “Sisal, for example, is supposed to be a prime clawing material, but some cats don’t like it.”

Determining what your cat prefers enables you to give her an alternative to your belongings. “Some people spend a lot of money on scratching posts made of one kind of material, and their cats don’t like them,” says Dr. Houpt. “You need to provide her with something she can get her claws into, something that will show her marks and maintain her claws.” Additionally, some cats prefer to claw vertical surfaces while others like horizontal or even sloped surfaces.
A Two-Pronged Solution. Physical punishment is rarely successful as an aversion technique for any inappropriate behavior. “You always have to catch the cat exactly at the moment of misbehavior every time she misbehaves,” says Dr. Houpt. “Eventually, the cat just learns to claw when you aren’t around.”

Getting your cat to stop scratching your belongings requires a two-pronged approach. “You need to make whatever your cat is scratching less desirable and provide her with something more desirable,” says Dr. Houpt.

To make surfaces less desirable for clawing, try attaching double-sided tape, which cats don’t like to feel on their paws. Cover sofa and chair ends with aluminum foil to deter clawing. If your cat attacks an area of the carpet, cover it with a plastic runner, knobby side up. Scented oil that your cat doesn’t like sprayed onto a surface may keep her away from it. “Test the fabric for stain resistance and make sure the scent of the oil is not overpowering for you or your cat,” says Dr. Houpt.

Provide a Cat-Friendly Spot. At the same time that you’re dissuading her from clawing certain places, you need to provide your cat with objects to claw. “If you don’t give your cat something else, you’ve only fought half the battle,” says Dr. Houpt. “Your cat is scratching there for a reason. If you cover the couch corner, put a scratching object next to it so the cat can use it.”

Scratching objects certainly don’t need to be complex or expensive. Cardboard scratchers, a piece of driftwood or even swatches of carpet may be all your cat needs. “Many cats like to scratch the back side of carpet remnants,” says Dr. Houpt. To encourage your cat to use the post, spray it with catnip scent, but don’t take your cat to it and make her scratch the post. “Cats don’t like to be forced,” says Dr. Houpt. Place scratching options where your cat will use them.