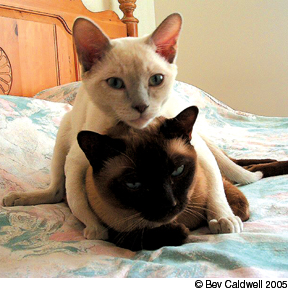 Your cat seems to love being with you. She doesnt ever seem to need other cats. In fact, she gets irritated – even aggressive – when another feline roams too close to her home. And yet, it doesnt quite make sense. Cats can be extremely social with each other, especially when theyve been brought up together. So the question is: Are cats social animals or not?

Feline Social Structure
Many human companions will boast – or maybe complain – about how independent their cats are, seemingly not needing other cats (and sometimes not even people). Recent studies show that cats do have a social structure when relating to other cats – but it is quite different from the pack nature of dogs and that of humans. Therefore, many cats do like to be with other cats – but they dont have to be with them.

It all depends on a cats individual genetic make-up and how he or she was raised, says Stefanie Schwartz, DVM, MSc, a board-certified veterinary behaviorist at VCA South Shore Animal Hospital in Weymouth, Massachusetts. Three to seven weeks of age is a period of critical development in a kittens life. Positive social experiences with people and other kittens usually provide a positive template for all other future interactions with people, other cats and maybe other animals.

Feline genetic make-up allows cats maximum flexibility to survive alone or with other cats in the wild, in single or multi-cat homes or on a farm with lots of cats, says Dr. Schwartz. That is quite marvelous. Cats are made to be sociable, but they can also survive alone if they need to.

The best example of a social order among felines is the lions. A pride of lions is composed of a single male, or brothers, and a large harem of related females made up of mothers, daughters, sisters and aunts. Lions seem to hunt and take care of the young communally.  And they maintain a certain hierarchy within the pride.

Within a group of domestic cats living together, the social structure is matriarchal – very similar to that of the pride. Cats that are socially bonded will sleep close to each other, while they will sleep apart from cats they are not as close to. Family members that have grown up together tend to prefer each other to outsiders.

You can observe natural communal behavior among groups of feral cats. In fact, their relationships are very much like the behavior found in a lion pride. Cats in a colony will groom each other and touch noses (a feline way of welcoming) and may even take care of each others kittens.

Territory and Dominance
While very influential in affecting behavior in dogs, territory and dominance in cats are more complicated issues. In fact, the two may overlap. There seems to be a time-sharing of space by cats, says Dr. Schwartz. Whether outdoors or at home, cats who like or tolerate each other will often use the same space or paths at the same time of day. If two cats dont like each other, they will change the route or time of day they use the space. Or one – usually the less dominant cat – will avoid the space altogether.

Cats come with a variety of facial expressions, vocal sounds and body gestures that enable them to socialize. Cats have twice as many vocalizations as do dogs, says Dr. Schwartz. Some of these vocal sounds enable them to communicate at a distance, but others are meant for intimate communication. This is additional proof that cats are social creatures.

Cats will rub against each other to mingle their scents. This is one way that cats may also determine ranking. A subordinate or juvenile cat may rub up more against a ranking or older cat, who may or may not reciprocate, says Dr. Schwartz.

The Human/Feline Connection
Its very intriguing to analyze the bond between cats and humans. The mistake we often make is assuming a cats social nature is like that of humans or dogs. In truth, humans and dogs have a more innate need for clearly defined social structure.

Some experts believe that the human-feline bond resembles a mother-kitten relationship. After all, we feed them, play with them, protect them and groom them. According to Dr. Schwartz, I dont think its necessarily a parental relationship. I think cats see us as other beings whom they rely on for their food and entertainment.

Youll notice how your cat will rub up against your legs or outstretched fingertips over and over. Besides greeting you, exchanging scents and expressing affection, he or she is recognizing you as the dominant one in the relationship – as your cat does with other cats.

We will probably never fully understand why cats need us one moment and avoid us the next, why they sometimes come to us and sometimes refuse, why they do one thing one day and just the opposite the next. But its part of the feline mystique that makes them such special companions.