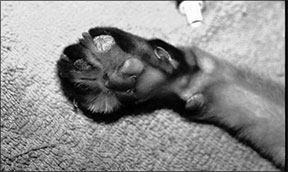 Imagine this scenario: Unsightly inflamed and crusting skin start to appear on a cat’s face, the tips of his ears and pressure points such as toes, elbows and footpads. His fever persists despite antibiotics. His legs are stiff, and urination has increased. What could the diagnosis be?

It might come as a surprise to those of us who believe only people get lupus, but the cat in question could indeed have the disease. His owner likely doesn’t know it, because lupus can mimic many other diseases and systemic drug reactions. Dermatologist William H. Miller, VMD, Medical Director of the Cornell Companion Animal Hospital, calls it the great pretender.

True lupus is rare in cats though some believe that SLE may be somewhat underdiagnosed. However, Dr. Miller says, “Drug reactions are common — SLE is not.” Because the signs of lupus resemble other diseases, however, owners should take their cat for a veterinary exam for diagnosis and treatment as soon as signs emerge. If untreated, autoimmune diseases can cause serious, system-wide complications.

“Many other conditions that can be cured, like Lyme disease, can look like lupus. The diagnosis of lupus can be made only after an extensive, and therefore usually expensive, evaluation,” Dr. Miller says.

Lupus is discounted or diagnosed using both clinical and laboratory evaluation, including a urinalysis and a tick-borne disease panel. If the cat lives in an area where he may have been bitten by a female sandfly, giving rise to a disease called leishmaniasis, he’d also be tested for that disease.

The onset of lupus can be slow and insidious — or apparently sudden. In that case, the disease actually has been progressing before owners notice that their cat is sick, Dr. Miller says. It takes time for tissue damage to reach a level where an organ can’t function effectively. Some lupus conditions, such as widespread cutaneous lupus and discoid lupus erythematosus, affect the skin but not internal organs.

The cause isn’t known, although ultraviolet sunlight may be one of many factors involved. In humans, genetics and viral infections also are thought to play a role. Several studies on pets of human lupus patients suggested the pets may be at higher risk of acquiring lupus, but Dr. Miller doubts the findings. “I do not believe that there is clear and convincing evidence of that association.”

No Cure in Sight. “Any version of lupus is incurable,” Dr. Miller says, “but can be controlled with medications of varying potency and toxicity.”

Lupus usually is treated with immunosuppressive treatments for life. The drugs and their doses depend on the disease’s severity. For example, a cat with a type of anemia called hemolytic anemia, which may be found in lupus patients, may die quite quickly, Dr. Miller says, so he will be treated with high doses of one or more potent drugs.

“If a steroid has to be given daily at high doses, steroid side effects will shorten the patient’s life,” Dr. Miller says. Also, animals with severe anemia or thrombocytopenia (low platelet counts, which can also accompany lupus) “may die despite vigorous treatments.”

Cats with mild skin disease, arthritis or other less severe symptoms typically can go into remission, Dr. Miller says. If a low dose of a steroid such as prednisolone given every other day proves effective, then the cat usually can do well for long periods of time. ❖