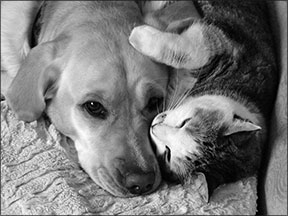 Nearly four out of 10 pet-owning households in the U.S. have more than one animal — multiple cats, dogs or a variety of other pets, according to the American Pet Products Association. No matter the combination, the potential for conflict always exists, especially with different species whose biological and behavioral imperatives run counter to each other.

However, keeping multiple pets also confers benefits. Animals home alone during the day usually like companionship, even if it’s not from the same species. The resident pet can also be a role model for the newcomer, helping him learn household rules.

Critical First Step. Although they have differences, most pets can coexist happily when owners understand their behaviors and meet their needs. The first step is to determine whether your cat really needs a companion.
As a result of their evolution, cats prefer a solitary existence, with people as their only companions, says behaviorist Katherine A. Houpt, VMD, Ph.D., professor emeritus at the Cornell University College of Veterinary Medicine. “The ancestral cat was solitary and so are modern cats when food is scarce and widely dispersed.”

Cats might enjoy a playmate during kittenhood, but as adults they’re fine being alone. One of the pleasures of keeping cats, though, is appreciating their infinite variety, so many of us choose to have more than one. In some cases, couples getting married may need to merge their feline households. Dr. Houpt recalls one pair of clients she counseled. “He had nine cats, and she had six cats and a couple of dogs.”

The stress of living with so many other animals was too much for the cats, and they began urine-marking territory to carve out some space of their own. ”The prognosis was pretty bad,” Dr. Houpt says, “but they seemed to be willing to increase vertical space in their house, add many litter boxes and use deterrents to keep the cats off places they really did not want them to spray like the plate rail over their kitchen counters.”

Some people get a second cat because they believe the first is lonely. A shy cat who spends most of his life hiding under the bed, especially when people visit, often engenders this belief. The owners think a second cat will enliven the first one. He may — but not necessarily in the way they hoped.

“He comes out, tail up, greets everybody, rubs on everybody but then attacks the first cat,” Dr. Houpt says. “The owner feels terrible, because she likes the second cat better but feels loyalty to the first cat.”

Social vs. Solitary. Cats and dogs can undoubtedly be best friends, but they aren’t natural soul mates. Cats are loners, and dogs are social, for one thing. And while both are predators in their own right, some dogs view cats as prey and will chase them, upsetting both the cats and the household. Dogs are more likely to guard their food than cats and may take exception to a cat walking nearby, even if the cat has no interest in the dog’s food. Other potential areas of conflict, whether between cats or between cats and dogs, include sleeping areas, bed privileges, toys and litter box access.

Avoiding conflict and restoring harmony starts with recognizing the root of the problem. It can be prey drive, territorial disputes, which are common between cats, or spats over resources, which can range from food to an owner’s lap.

“Proximity to owner is the most common source of conflict,” Dr. Houpt says. Your cat may be used to being the queen of your lap — until the pushy new puppy topples her from her throne. Give the original pet the first shot at petting or sitting on your lap. It’s ideal if you have several family members to help give pets their fair share of attention.

Solutions can call for training, behavioral modification, separation or providing an adequate amount of resources. (Please see “Appealing to the Heart of a Hunter/Enrichment in physical and mental stimulation can help avoid apathy, obesity and predatory aggression,” in the January 2014 issue.)
Instinct to Chase. Chasing is an instinctive behavior in dogs. It’s best if you rear a puppy with a cat from an early age, but if that didn’t happen in your household, you can try techniques to teach your dog that cats — indoors or outdoors — are off limits.

They include reintroducing the dog and cat as if they were new to each other (see sidebar on Page 4); teaching your dog to always come when called so you can stop chases; and as a last resort, keeping the two separated. It’s also essential that your cat have plenty of avenues of escape, such as a tall cat tree or a piece of furniture he can run under that the dog can’t. And while you can’t train a cat to hold his ground when a dog runs toward him, a cat who does so often puts an end to the chase. Without motion to stimulate them, many dogs decide to look for more interesting prey.

Conflict among cats is more personality-driven. If you want to have two cats, it’s best to acquire them as littermates. After they’re 18 months old, cats who haven’t been raised together may not get along when they’re introduced.

Give Them Space. To help smooth ruffled fur, be sure each cat has plenty of space and resources to call his own. A good rule is one litter box per cat plus one more, multiple food and water dishes, multiples of favorite toys, and multiple beds.

Note your cats’ habits when using resources. They often coexist on a time-share basis. For instance, one may have the window perch in the morning, the other in the afternoon. Paying attention to when and why conflicts arise may lead to the solutions.

As an owner of multiple pets, you are likely to face challenges in creating and maintaining a happy home, but you’ll reap multiple benefits, too. “It is so nice to come home and find the cat and the dog standing side by side, waiting to greet you,” Dr. Houpt says, “or to see the cat giving the dog a bath, which he seems to like much more than the ones you give him.” ❖