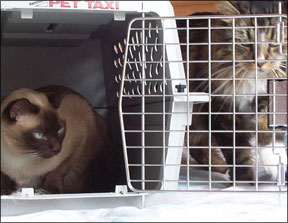 Catastrophic events can and do happen in all areas of the country. Floods, tornados, hurricanes, forest fires, mudslides and earthquakes are all examples of natural disasters that force people from their homes often with little time to prepare for departure.

If youve ever experienced an emergency evacuation, you know the drill: no pets. If you cant get out of town using your own transportation and have to rely on public transportation you probably wont be able to take your pets. If youre unable to book a hotel that accepts pets (and many dont) and need to go to a temporary shelter to ride out the storm, youll have to leave the cats at home. And if you try to stay with your home and require an emergency rescue crew to pluck you off your rooftop, your cats cant come with you.

“No Pets” Means No Pets

Simply put: More lives could be saved if people were allowed to evacuate with their beloved pets.

In September 2005, the co-chairs of the Congressional Friends of Animals Caucus, Reps. Tom Lantos, D-Calif., and Christopher Shays, R-Calif., introduced the Pets Evacuation and Transportation Standards (PETS) Act to make sure that, in the face of a natural or manmade disaster, no pet will be left behind.

No longer will pet owners be forced to abandon their animals. State and local authorities will be required to develop plans to include evacuees pets. These plans must then be presented to the Federal Emergency Management Agency [FEMA] in order for a state to receive federal funds, says Shonali Burke, spokes-person for the ASPCA in Washington, D.C.

The PETS Act, which was signed into law on October 6, 2006, is hoped to create state and local plans that include: emergency shelters that allow pets; transportation alternatives for those who have pets but do not have their own vehicles; and the ability of first responders (i.e., fire, police, etc.) to rescue not only people but their pets, too.

You Still Need to Make Plans

“The Act doesnt absolve people from making their own plans,” cautions Burke. Pet owners should always consider in advance what their evacuation plans and route will be, as well as creating an emergency kit for the pet with a carrier, leash, photos of the pet, vaccination records, licenses, food, water and other necessities.

“We learned many important lessons from Hurricanes Katrina, Rita and Wilma,” says Sen. Ted Stevens, R-Alaska, a co-signer of the PETS bill when it was introduced in the Senate. “One of these lessons was that we must put procedures in place to evacuate not only residents in areas impacted by natural disaster, but also pets and service animals. This legislation is an important step forward in our efforts to mitigate personal suffering during times of disaster.” v