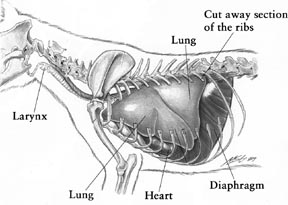 The poet, Robert Byrne, once wrote, To err is human; to purr feline. If you live with a companion cat, you have undoubtedly been comforted on many occasions by the sound of your cat purring. The purr is one of the most exquisite sounds in nature. Even some wild cats, such as lions, cheetahs, servals, ocelots, and pumas, purr. Relatively few creatures besides cats engage in purring. Exceptions are civets – small catlike creatures – and raccoons.

What is purring?
The purr is a continuous, low frequency hum. Not associated with vocalizations such as calling or grunting that require a cat to open the mouth and use the vocal chords, purring can oc-cur simultaneously when your cat is meowing or talking to you. Domestic cats purr at a frequency of about 25 hertz (25 cycles per second). The purr is accompanied by a vibration on the cats body surface, most notably around the mouth and nose. Purring occurs steadily whether a cat is inhaling or exhaling.

Cats learn to purr when they are about two days old and, while nursing, a mother cat will purr along with her kittens. Nobody really knows what purring tells another cat, says James Richards, DVM, director of the Cornell Feline Health Center.

How cats purr
Theories about how cats purr have included vibrations of the soft palate at the back of the cats mouth, movement of air in spasms through the cats diaphragm, and vibrations caused by blood passing through a vein in the cats chest.

In 1991, Dawn E. Frazer Sissom and D.A. Rice, of the department of biological engineering at Tulane University, and G. Peters of the Zoologisches Forschunginstitut und Museum in Bonn, Germany, studied 10 domestic cats and found that purring is most likely caused by an activation of the muscles of the larynx during respiration. They theorize that the diaphragm and other muscles used to drive respiration probably are not necessary for purring.

Lea Stogdale, BVSc, and John Delack, DVM, offer another theory, as reported 1985 in the Compendium on Continuing Education for the Practicing Veterinarian. The authors report on the work of J.E. Remmers and H. Gautier, who studied the physical mechanisms and the neurological control in-volved in the production of feline purring and concluded that pur-ring is caused by very regular, rapid, alternating activation of the intrinsic laryngeal muscles and the diaphragm.

Remmers and Gautier recorded purring with a microphone designed for the human voice, and observed that purring is conducted by an oscillatory mechanism.

The research of Fauna Communications Research Institute president, Elizabeth von Muggenthaler, concurs with the conclusions of Stogdale and Delack. The diaphragm is most assuredly responsible for at least 1/3 to 1/2 of the production of the purr, she says. The vibrations occurring over it are not only the strongest, as compared with the larynx, but they also have a separate set of harmonics, some are different from the larynx.

Why cats purr
Purring appears to be an all-purpose form of communication, but why cats purr is even more of a mystery than how they purr. Cats purr when they are content, nursing, ill, injured, anxious, sexually engaged, or even dying. Youve probably noticed your cat purring under stressful conditions, such as when visiting the veterinarian or riding in the car.

The researchers at Fauna, a non-profit organization dedicated to the study of bioaccoustics, believe they have an answer to the mystery of why cats purr. That cats have nine lives is an old wives tale, but cats do seem to recover from falls of great distances and purring may help them do that. Recent studies of five species of cats, including 45 domestic cats, found cats purring at rates between 20 and 200 hertz. Low-frequency noises or hums are known to aid pain relief and healing of bones, tendons, and muscles. A number of studies in other species suggest that these frequencies also help bones strengthen and grow. Sound energy at 18 to 35 hertz is used in many sports medicine programs for therapeutic biomechanical stimulation for joint mobility.

According to von Muggenthaler, some research suggests that domestic cats are, in general, less prone to postoperative complications following elective surgeries.

Although it is impossible to standardize the healing time for dogs and cats because of the types of injuries received, amount of trauma to soft tissues, types of treatment, and after care, von Muggenthaler says cats do not have near the prevalence of orthopedic disease or ligament and muscle traumas as dogs do. For example, research indicates that, as compared with dogs, cats are less prone to herniated intervertebral disks and experience lesser rates of both early disk degeneration and spinal infections.

Cats also appear to heal quicker then dogs with regard to skin grafting. There are many possible causes for the reduced prevalence of orthopedic disease, including body size and conformation, but von Muggenthaler believes that for the purr to evolve in different cat species over time, it would have to be a survival mechanism. Helping a cat to heal itself would be a good reason to expend the energy required to purr under a variety of circumstances. I think it illustrates that animals can teach us a lot about ourselves and the sounds we expose ourselves to, says von Muggenthaler.

Listening to a cat purr has been shown to lower blood pressure and decrease anxiety in humans. Purring may have the same restorative power for your cat.