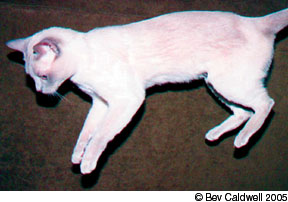 Cats have spent more than 5,000 years living with humans. But no matter how advanced twenty-first century veterinary medicine and feline care have become, some old ideas persist about our feline friends.

Cats can see in the dark. Cats have always been credited with seeing things people cant, and in low light thats certainly true. Cats cant see in total darkness, says Thomas Kern, DVM of Cornell Universitys College of Veterinary Medicine. But they can see in only one-sixth the amount of light that a human requires. The light-sensitive part of the eye, the retina, contains two kinds of photoreceptors – cones and rods. Cones help the eye define color and fine-tune vision, while rods help an animal to see in dim light.

Cats have predominantly rod retinas, says Dr. Kern, who is board-certified by the American College of Veterinary Ophthalmologists. In addition, cats – like other nocturnal animals – have a layer of tissue on the backs of their eyes called the tapetum lucidum. This layer reflects incoming light back out through the retina, enabling it to strike the rods a second time. The tapetum gives a cats eyes that eerie nighttime glow.

Cats always land on their feet. The nineteenth-century physician and father of cinematography, Etienne Jules Marey, became famous for his studies of movement in people and animals. He invented a chronophotographic fixed-plate camera, and succeeded in combining several successive images of a single movement on one photographic plate.

One of the most famous was the falling cat that, when dropped from a height of several feet, twisted his body 180 degrees to land feet first.

Its a reflex action, says Dr. Weigner. Cats almost always land on their feet if they have enough time to turn their bodies around. He notes, however, that even though they land on their feet, cats that fall from great heights suffer severe injuries.

Neutered cats gain weight. Some people avoid neutering their cats for fear of the cats gaining weight. There is some evidence that the loss of androgenic hormones (estrogen and testosterone) will promote weight gain, but its minor, says Dr. Weigner. Its more a matter of ounces than pounds. A sexually mature or breeding cat that is neutered over the age of two or three will lose some muscle mass, but gain body fat. You may see some change, but overall its little difference, says Dr. Weigner.

Whats true for you is true for your cat. Weight gain is caused by consuming too many calories and expending too few. Cats that are neutered are primarily indoor cats that eat more and exercise less, says Dr. Weigner. Hint: When youre tempted to pop a kitty video in the VCR, opt for the fishing pole toy instead.

Cats urinate on belongings out of spite. A cat that urinates on clothing, suitcases or other belongings can be a vexing problem to his owner. If the urination is connected to anything bad, the owners say its out of spite, says Michelle Bamberger, MS, DVM of Vet Behavior Consults in Ithaca, New York. But a cat will urinate where the owners scent is if the cat is anxious and needs the comfort or attention of the owner, for whatever reason. A cat may experience stress in any number of situations, including separation from the owner, being scolded by the owner or seeing another animal outside.

Marking is associated with small quantities of urine, whereas a cat with an elimination problem will leave a substantial amount. Once you determine which is the case, discuss the problem with your veterinarian, a veterinary behaviorist or a certified applied animal behaviorist. Your veterinarian will be able to give you referrals, if required.

Cats steal the breath of babies. Cats are naturally attracted to warm rooms and blankets – just the kind of room that belongs to a baby. Cats are always looking for a nice warm place to sleep, says Dr. Bamberger. They gravitate to people and warm bodies.

If you have a new baby and are concerned about your cat making himself at home in the crib, keep the door to the room closed. Although cats smothering babies falls into the category of old wives tale, supervise any interaction your cat has with your new addition for your peace of mind.