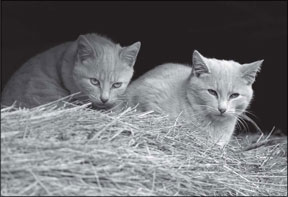 A study published earlier this year that found free-ranging cats annually kill an estimated 2.4 billion birds and more than 20 million mammals drew heated responses from both wildlife and cat advocates.

Lost in the controversy was the plight of outdoor cats themselves. They suffer from exposure to extreme weather and more injuries caused by cars, dogs, other cats and wild animals than those who live indoors, says Bruce G. Kornreich, DVM, Ph.D., Associate Director for Education and Outreach at the Feline Health Center at the Cornell University College of Veterinary Medicine.

“Infectious diseases are also far more likely to be spread among cats living in outdoor colonies,” he says. “Diseases like feline panleukopenia virus, feline leukemia virus, feline calicivirus and rabies are all devastating — and all preventable — via vaccination.”

Managing Colonies. Volunteer caretakers manage some feral colonies by trapping, neutering and releasing the cats to their outdoor environment, a practice known as TNR. Because cats are often vaccinated at the same time, TNR proponents say their work plays a vital role in maintaining healthy colonies.

However, humans also face potential health risks from feral cats, Dr. Kornreich says. “Humans may be exposed to rabies, a life-threatening illness, if they are bitten by an infected feral cat. Likewise, cat scratch fever can be dangerous if it gets into the blood. Fleas can transmit tapeworm to humans. Salmonella, and the parasitic diseases cryptosporidium and toxoplasmosis can all be contracted via the feces of feral cats, particularly by those who are immunosuppressed or pregnant.”

Preventing pet cats from being dropped off in feral cat colonies is another important part of the solution to the burgeoning feral cat population. “We’d like to better educate cat owners on what it means to own a cat. Ideally, this means caring for cats for their entire life and keeping them indoors, where the exposure to a multitude of diseases and injuries is significantly minimized,” Dr. Kornreich says. “Abandoning an unwanted cat into a feral cat colony circumvents the work that TNR folks are doing in good faith.”

Critics’ Questions. TNR opponents, however, say the work threatens the conservation of other species. They question, given the 60 to 80 million unowned cats in the U. S., whether TNR is the best way to reduce those numbers. TNR has reduced some feral cat populations, especially when accompanied by adoption, says Dr. Kornreich. “In other cases, TNR has not worked, perhaps because a high percentage of the feral cat population needs to be caught and neutered before their number begins to decline. It is a daunting task.”

The people doing TNR should receive credit for trying to address the problem, Dr. Kornreich says. “In turn, colony caretakers should do whatever they can to be good neighbors and improve perceptions of feral cats. Minimizing the impacts on local wildlife would go a long way toward achieving this goal. For example, it doesn’t make sense to have TNR colonies within or adjacent to wildlife preserves.”

For better or worse, the study on feral cats stirred debate, Dr. Kornreich says. “Clearly, cats have a very large impact on birds and wildlife. On the plus side, the controversy provides an opportunity for dialog between feral cat advocates and bird organizations. Perhaps it will enable these groups to move beyond an us-versus-them attitude and lead to greater communication to benefit both cats and native species.”