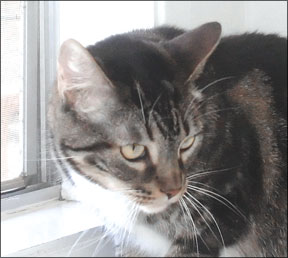 “Because all cats are tabbies, genetically speaking,” explains Miller. “All cats have a pattern of stripes, blotches, spots or whorls. If they have the dominant gene, theyre called Agouti –

and they show the tabby pattern. If they receive the recessive gene, theyre known as non-Agouti, and they will be a solid color with no pattern.”

However, you can often still see the tabby markings underneath as a ghost pattern. The next time you get the chance, look at a black cat in the sun. You should be able to see the hint of a tabby pattern. “This is a lot easier to see in kittens,” says Miller.

Not a Breed Apart

Many people think the tabby cat is a breed in and of itself, but its not. Its a color pattern consisting of stripes, combination stripes and whorls – and combination stripes and spots. There are long-haired tabbies and short-haired tabbies. There are Persian tabbies, Maine Coon tabbies, Norwegian Forest Cat tabbies, Oriental tabbies – even Manx tabbies. In fact, as of this writing, the Cat Fanciers Association (CFA) recognizes about 25 breeds with tabby markings.

A Coat of Many Patterns

Eons ago, the patterns of the tabby probably evolved as a form of protection for the cat through camouflage, says Miller. Here are the main types:

Striped: This tabby is also known as the mackerel, and is the most common pattern. Striped tabbies have rings around their tails and stripes running across their necks and chests. The stripes running down the sides of their bodies may be continuous, but are sometimes broken. They usually have darker spots on their bellies. Many people name their striped tabbies “Tiger” for obvious reasons.

Classic: If your cat has whorls on her side that look like a target, then you are the lucky companion of a classic tabby cat. Also very common, classics are the pattern of many American Shorthair cats. They have big blotches, surrounded by a big circle, says Miller. They also have very distinctive “butterfly wings” over the shoulder. On the top of the head is a little swirl, referred to as a scarab. There are spots on the belly.

“Its a very decorative cat,” says Miller. “We believe that the classic pattern is the result of an ancient mutation, which probably occurred in European cats thousands of years ago. This pattern provides very good camouflage, and could have helped cats survive in the forests.

Spotted: This tabby may have some stripes around the legs, but mainly has a body pattern of spots, reminding some of a leopard or cheetah. The Ocicat is one breed that proudly wears the spots in the family. But the only naturally spotted tabby cat is the Egyptian Mau. This cat may be a direct descendant of the original spotted Egyptian wildcat, believed to be one of the earliest domesticated cats.

“The genetics of the spotted tabbies are not completely known,” says Miller. “Some geneticists believe the spotted tabby is the result of a modifying gene, affecting classic or mackerel patterns. This causes the stripes or whorls to break up, resulting in spots.”

Ticked: This pattern is one of the loveliest because each hair of the cat has different bands of color from the start of the hair to the tip. The result can be a shimmering effect. The ticked pattern

does not only present itself in cats, but also in rabbits and other animals.

The word “tabby” started back in ancient Baghdad, explains Miller. In the Attabiyah district of old Baghdad, the Jews made a beautiful, striped black-and-white silk that had a swirling effect. “In Britain, they called it tabbi silk, and thats how the tabby cat got his name.”

In fact, the first official cat show was held at the Crystal Palace in London in 1871. And it was at this momentous occasion that the first tabby cat – a 21-pound English tabby – was introduced to the world.

Here are some additional tabby facts that may surprise you:

So if you ever thought a tabby was just an ordinary cat, youre wrong, says Miller. “When people find out what tabby really means, they are very excited to know what kind of tabby cat they have.”