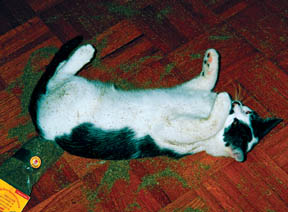 Why does one of your cats go crazy over catnip while the other couldnt care less? This is one of the intriguing facts about this plant scientifically known as Nepeta cataria. About two out of three felines love catnip, but one third of the cat population is unaffected by it. Generally, cats will not be attracted to catnip until they are two or three months old, which is when their olfactory senses are mature.

The Magic of Catnip
Catnip is a member of the mint family of herbs. This aromatic herb originated in North Africa and the Mediterranean region and grows wild throughout the eastern United States, the Midwest and Washington state. The plant prefers to grow in dry, semi-arid places. You will find wild catnip along hedge rows, fence lines and railway lines and near old, abandoned buildings.

There are a number of varieties of catnip, but each produces oils containing the chemical trans-nepetalactone, which gives off a scent that tends to create a feeling of exhilaration and well-being in felines.

Catnip aficionados believe that catnip not only influences domestic cats, but also the great cats of the wild – cougars, bobcats, lions and lynxes.However, certain domestic cat breeds that did not originate in areas where catnip is indigenous are believed to be less responsive to catnip.These include Siamese, Burmese and Himalayans. Most Maine Coons, on the other hand, love catnip. But dont be surprised: Your cat may react – or not react – to catnip regardless of his breed.

Catnip is a safe compound. While your cat doesnt require it, there is no harm in treating your cat regularly with catnip. Theres a definite benefit, says Katherine Houpt, VMD, PhD, director of the Animal Behavior Clinic at Cornell Universitys College of Veterinary Medicine. It gives your cat a good time. The only drawback is that some cats become a little too aggressive with other cats from taking catnip.

In addition to being a fun substance, catnip is useful to trainers as a reward. Some catnip observers believe that catnip acts as a feline aphrodisiac, but there is no evidence for this. What about the nutritional aspects of catnip? Some catnip producers claim that catnip is a rich source of vitamins A, B and C. But Ive never seen any studies that investigated the nutritional value of catnip, so I cant say its a rich source of anything, says James Richards, DVM, director of the Cornell Feline Health Center at the College of Veterinary Medicine. But even if it was, cats dont eat enough of the stuff for it to be beneficial.

Your Silly Cat
Cats are fun to watch when they get hold of some catnip. They roll around on the floor, rub against things, shake their heads, try to distribute the catnip all over themselves and get a rather dazed look on their faces. The intriguing thing is that catnip only seems to work when the cat sniffs it, says Dr. Houpt. Even though cats will put catnip in their mouths, it is only effective through the olfactory nerves.

But catnip can be more than fun and games for your cat. If your cat is overweight, getting on in years or just plain sluggish, catnip can give him a good cardiovascular workout. Use catnip to reward your cat for good behavior or to reinforce a positive behavior change.

How to Give Catnip
Your feline can enjoy catnip once a week. Theres no real problem with giving it more than once a week, except if you are trying to reinforce behavior and use it as a special treat. If your cat tires of it, she will turn her nose up at it. You can buy it in different forms – pouches or catnip-stuffed mice and other toys.

Catnip will lose its potency after a while. You can try storing it in the freezer. Better yet, you can grow your own, says Dr. Houpt. You can buy cat gardens with catnip seed or plants and have a fresh supply.

Does Catnip Work in People?
There have been numerous accounts of the effects of catnip on humans. For centuries, herbalists have recommended catnip as a treatment for colic, headache and various muscle spasms. When consumed in tea, catnip has been known to perform as a mild stimulant. On the other hand, advocates also say that catnip acts as a sleep-inducing agent. There is no evidence to suggest, however, that catnip has the same psychoactive effects in humans that it does in cats. A word to the wise: Before you join your kitty in a catnip treat, consult your healthcare practitioner.