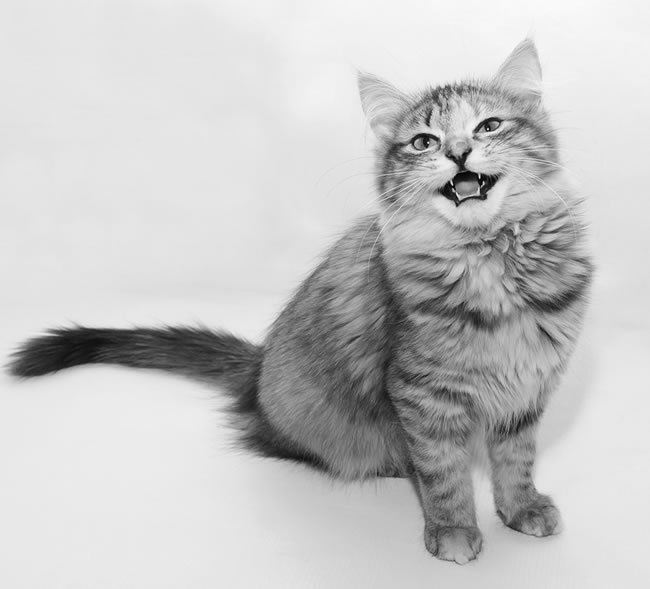 Meowing can be endearing, but lets face it: When our cats meow to excess, it can sometimes drive us crazy. The same sort of meowing that is not a problem at 6 p.m. can be a huge problem at 4 a.m. when the owner is trying to sleep, says behaviorist Katherine A. Houpt, VMD, Ph.D., professor emeritus at Cornell University College of Veterinary Medicine. What cat owners consider excessive meowing in cats depends largely on what time of day it is.

Common Complaint. While frequent nighttime or early morning meowing is a fairly common complaint among cat owners, Unlike excessive barking, its rarely serious enough for an owner to pay a behaviorist to solve the problem, says Dr. Houpt. In one of our studies, owners reported that only 10 out of 736 cat cases – or 1.4 percent of behavior problems – meowed excessively.

Meows can express and evoke a sense of urgency for food or attention. Initially, kittens meow to get their mothers attention, Dr. Houpt says, so it makes sense for pet cats, as adults, to meow a great deal when they want something from us, their surrogate mothers.

Surprisingly, these same adult cats dont generally meow to one another at all. They may caterwaul to one another, Dr. Houpt says, but those are aggressive vocalizations, as compared to the pleading vocalizations they bestow upon their humans.

And, she adds, We humans unwittingly teach our cats to meow, simply by responding positively to them when they do.

If you prefer your cats on the quiet side, you may want to steer clear of the Oriental breeds who tend to be great talkers. By nature, Dr. Houpt says, Siamese, Himalayans and Burmese cats tend to be more vocal than other breeds.

Wakeup Calls. Its also important to understand that cats are crepuscular creatures. Their nature is to hunt at dawn and dusk, Dr. Houpt says. They awaken naturally at dawn and they want company. Besides meowing loudly, they may jump on their favorite sleeping humans, tap us with their paws or even knock things off shelves. Owners often make matters worse by leaping out of bed as soon as the cat wakes them up and then feeding him, which serves only to reinforce the problem behavior.

Excessive crepuscular meowing often becomes a couples problem. The wife may not mind it, but the husband does – or vice versa, Dr. Houpt says. Unfortunately, as I tell these couples, I dont do marriage counseling!

However, she did find a good solution in her own situation. Before I got married, my cat slept with me, but my husband preferred him to sleep elsewhere, she says. We compromised by having the cat sleep on a bench alongside the bed.