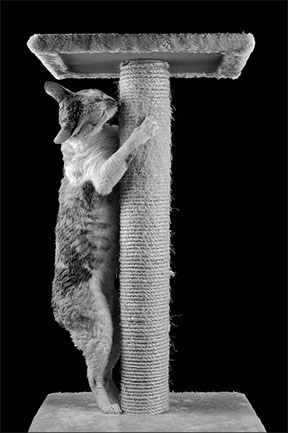 Scratching is a normal yet complex behavior in cats that can damage both the house and the cat-owner bond. Understanding the basis of destructive scratching is the first step in preventing it.

A preliminary study at the University of Pisa in Italy, examining the variables in cats’ use of scratching posts, found what seems to be self-evident: Having a scratching post, or not having one, made a difference in the cat’s behavior. If there is one, the cat will use it.

Training Needed. “It’s good to know that a scratching post is not just an ornament,” says animal behaviorist Katherine H. Houpt, DVM, Ph.D., professor emeritus at the Cornell University College of Veterinary Medicine. However, as owners who have bought scratching posts have learned, sometimes they need to train the cat to use them.

The research, published in the Journal of Feline Medicine and Surgery, also found that scratching behavior varied with the cats’ gender and neutering status. For example, intact male cats scratched surfaces other than scratching posts, but neutered males and females and intact females rarely chose furniture to scratch.

Not all cats scratch with the same frequency, and there is no breed predisposition. It can be difficult to determine scratching’s importance to an individual cat, but frequency is a tell-tale factor, Dr. Houpt says, explaining that the more a cat scratches, the more important it is to him.

“Scratching is an evolutionary remnant of marking behavior,” says Bruce G. Kornreich, DVM, Ph.D., Associate Director for Education and Outreach at the Feline Health Center at Cornell. “It allows deposition of scents from the glands in paws and also helps cats groom their nails. It removes the nail sheath so that the new nail can grow.”

Neutering’s Effect. Declawed cats continue to scratch, which suggests that they’re not merely sharpening their claws. Neutering decreases scratching in males, but it is not known if the same is true for spayed female cats.

Whatever the status of your cat, it’s easier on you — and him — if you don’t have to change this innate behavior. Trimming the nails regularly, every one or two weeks, makes a significant difference. A cat’s nail is shaped as a hook, and when you trim it, you cut off the hook, which can prevent household damage. Plastic nail sheaths can prevent the nails from doing damage, but nails grow out quickly.

While owners sometimes believe that cats scratch expensive objects, such as the brand new sofa, Dr. Houpt says location and substrate are more important to them. So is the ability to mark their territory. “Let’s say you bring a box in. He will scratch it to show the other cat or people that this is his territory,” she says. “Many times when you come home, a cat runs to the furniture and starts scratching. That could be marking behavior. The cat appears to be saying, ‘You may be in this room, but it is my room.’”

Watch Him in Action. The best way to determine the kind of post your cat likes is to simply watch him. If he doesn’t like one post, try another. Some scratching posts have indoor/outdoor carpeting that doesn’t appeal to cats. They might prefer wood covered with fabric or sisal. Material with loops they can get their claws into is a special favorite.

Some posts can be hung from door knobs or lie horizontally. Some cats prefer a horizontal surface such as the rug, and for them Dr. Houpt recommends catnip-impregnated corrugated cardboard.

Whichever type of post or tree your cat likes, place it where he likes to scratch, probably in the room where you and the cat spend time. Putting it next to the couch is good because it’s a prominent place. The minimum number of scratching posts for multiple cats: the number that prevents inappropriate scratching, Dr. Kornreich says. He suggests working your way up from the lowest to highest number.

You can train your cat to use a post in steps. With kittens and young adults, the best way is to encourage them to use scratching devices. These are objects designed to attract a cat’s scratching attention, including flat objects such as pads for horizontal scratchers and toys usually covered with sisal rope, fabric or cardboard.

Catnip Helps. Take your cat to a device and put toys on top of it. Or try rubbing catnip on it or placing treats on it and giving positive reinforcement when the cat uses it. Dr. Houpt says there’s a lack of good research on the use of pheromones — chemical substances produced by an animal that usually serve as a stimulus for behavioral responses — but she has heard anecdotally that they can help.

One problem she sees in her practice is when a couple marries and one of them likes the new furniture better than the scratching cat. “Once a cat has learned it’s OK to scratch the furniture, it’s going to be hard for him to discriminate between the old couch on the porch vs. the new one in the living room. Try to teach him to use only his own scratching post or areas.”

Punishment doesn’t work because cats don’t respond to yelling by not scratching. It’s like yelling at a cat for doing something as natural as grooming, Dr. Kornreich says.
A variety of possible deterrents are available:

Furniture repellent sprays. They discourage some cats, but often scents last for only 10 minutes before the odor dissipates.

Sticky double-sided tape. Place it on furniture, as long as it doesn’t damage it.
Smooth shields. They may deter scratching on furniture because the cat loses interest when he can’t get a good pull.

Safe booby traps. A tower of plastic cups works harmlessly. A compressed air can designed for cats. Dr. Houpt is a fan of Ssscat Automated Cat Deterrent. When a cat approaches a restricted area, a motion detector releases a spray of non-toxic gas in a hiss to shoo him away. She puts it on her kitchen counter and at doorways to keep her cat indoors. “It’s like being hissed at by a lion,” Dr. Houpt says.

It’s not reasonable to assume that discouraging your cat from scratching one piece of furniture will stop the behavior altogether. He may simply pick another object, and more than one deterrent may be necessary. Often the more effective course is the positive one, Dr. Houpt says. “Give him something more appealing to scratch.”