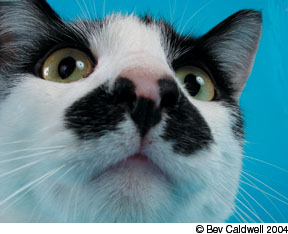 Are you surprised that your cat struggles to get away from you when youve just put on your favorite perfume? That may be because your cats amazing sense of smell is so many times more acute than a humans – probably at least 14 times so, according to Larry Myers, DVM, PhD of Auburn University College of Veterinary Medicine in Auburn, Alabama.

Smell is an extremely important sense to your cat and plays a much greater role in his life than it does in yours. Smell not only gives your cat essential information about his food, companions and enemies, but also serves as the main way of communicating with other cats.

Smell Means Survival
The sense of smell kicks in right after birth. Since a kittens eyes are closed for the first couple of weeks of life, the kitten uses his sense of smell to help him locate his mothers milk. As the kitten matures into a cat, the feline nose will help him sniff out safe food to eat, find a mate, avoid enemies and mark his territory. I would say that a cats sense of smell is probably comparable to that of a dog in terms of detection, says Dr. Myers.

Kittens appear to be very impressionable regarding the sense of smell. To function well as adults, kittens require exposure to a variety of scents and smells. Thats why early socialization with routine handling is so important. Kittens that associate a negative experience with a certain smell are likely to react negatively to that odor throughout adulthood. One example is associating the smell of a grooming room with pain or fear. It is likely that your cat will become a wild thing whenever she smells that odor.

The key to a cats extraordinary sense of smell is in its physiology. A cats nose may have up to about 200 million odor sensitive cells. Cats also have a pair of vomeronasal organs [also called Jacobsons organs] above the palate that are connected to a duct that passes between the nasal and the oral cavities, says Dr. Myers. When cats investigate a smell, they often make a grimace, known as the Flehman reaction. You may notice your cat curling up her lips, baring her teeth, squinting her eyes and even flattening her ears as she concentrates.

The Flehman reaction usually comes into play while a cat is seeking a mate, especially when a male is smelling a female in heat. Some experts believe that the Flehman response opens the duct that connects the nasal and oral cavities to the vomeronasal organs, says Dr. Meyers.

A cats smell and taste work together in such a way that the cat almost tastes the smell, according to some experts. But there are still many mysteries with exactly how the cats sense of smell works, says Dr. Myers, because, as you can imagine, it is very difficult to perform olfactory research on cats.

Leaving a Scent to Remember
Cats not only use their sense of smell, but they have numerous ways of depositing their own scent on objects to lay claim to them or make these things recognizable. Cats have scent glands along the tail, on either side of the forehead, on their lips and chin, and on the underside of their front paws. So when your cat rubs up against you when you come in, shes not just being affectionate. Shes marking you as her territory, along with the sofa and other things she owns.

Youll notice that your cat will give you a good sniffing when you come home. What does your cat know about you as you come in the door? Here are some of the possibilities: Your cat may smell what youve had for lunch, the friend you shook hands with, a co-worker you hugged, a dog that licked your hand and some tar you stepped in.

Sometimes the sense of smell leads to trouble, such as when your cats housemate comes back from the veterinarian smelling like a foreign animal. Some experts suggest bringing both cats to the veterinarians office even though only one cat may be examined or treated. That way, both cats pick up the same set of smells from the office or animal hospital and there shouldnt be any conflict between them.

Your cat may also be irritated by a new piece of furniture you move into your home. Most likely your cat will explore it and mark it with his own scent by rubbing up against it. To avoid extreme scent-marking through urinating on your new sofa, place a familiar-smelling object or fabric on the new furniture so your cat will adjust to it more easily.

Losing the Sense of Smell
Smell is so important to your cat that his whole life can change if there is partial or total loss of smell. There are several factors that may cause a loss of smell in cats, including increasing age, an upper respiratory infection and inhalation of toxins, says Dr. Myers.

The worst consequence is usually a lack of appetite, because a cat normally needs to sniff a meal before partaking of it, says Dr. Myers. But there are some solutions to this problem. He advises people to warm up a cats food because that may make it easier to smell. If that doesnt help, there are drugs to enhance a cats appetite, he says. With a cat that is suffering from an illness that has reduced her sense of smell, you may have to force-feed her to stimulate her appetite.

Its important that you help your cat protect one of her greatest assets – her sense of smell. Keeping your cat away from harmful substances and taking her for regular check-ups should go a long way to keeping your cat smelling well.