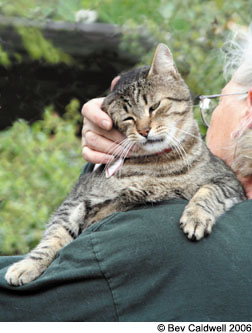 Studies have shown that the action of petting a cat lowers blood pressure, decreases heart rate and imparts a wonderful sense of relaxation and overall well-being. Although that sentence may describe the person petting a cat, it also applies to the cat being petted. Cats enjoy physical contact as kittens, and most cats socialized by humans at an early age enjoy being petted as much as their owners enjoy doing it. Cat owners who de-stress with their feline companions often observe their cats kneading with their paws, closing their eyes, purring loudly and perhaps drooling – signs that the cat is chilling out and warming up to the experience. Changes in or enhancement to the persons and cats disposition occur through the simple mechanism of touch.

Feeling Good and Good Feelings
Millions of years of evolution have honed the cats senses, including its sense of touch, for successful interaction with its environment. Although cats have receptors all over their bodies, the areas having less or no hair, such as the area around the face and the pads of the feet, are more sensitive to touching and being touched. Cats need more receptors in the areas where they communicate by facial rubs or via deposits from the pads of their feet. They are sensitive areas, says Penny L. Bernstein, associate professor of biological sciences at Kent State Universitys Stark Campus. It may not always be marking an object or person, especially during petting. There is no simple way to determine if cats are depositing anything when they rub their heads against an object.

A cat can feel hot and cold and experience pain the same way people do, even with all that hair. Hair is without sensation, but nerve endings at the base of the hair follicles enable a cat to feel when it is being stroked or touched. Nerve endings around the base of each whisker give cats information about their surroundings. Whiskers move forward when the cat is excited or aggressive, but contrary to popular folklore, the width of the whiskers does nothing to let a cat know if he can slither through an opening. Whiskers on the cheeks and face are probably helpful to cats hunting in the wild in subdued lighting.

The whiskers give more information about the position of small prey as the cat pulls the prey nearer its mouth, and probably make for more successful hunts, says James R. Richards, DVM, director of the Cornell Feline Health Center. But a cat that doesnt have whiskers lives life normally.

Rugged Individuals
Physiologically, all domestic cats are much the same, but despite their finely honed sense of touch, a cats partiality to being petted in certain spots is a matter of individual preference. In a study of 90 single-cat homes, Dr. Bernstein learned from their owners that 48 percent of cats preferred to be petted on the head, while 27 percent preferred to be stroked on the face – on the cheeks, on the nose, around the eyes or under the chin. The remaining 21 percent with a preference liked to be touched on or around the ears. Its reasonable to assume cats sense of touch is more acute where theres less hair, says Dr. Richards.

Some cats like to be stroked from the head to the base of their tails, while others prefer not to be petted below the neck. In Dr. Bernsteins survey only about eight percent of cat owners said their cats preferred to be petted on the stomach or tail. Very few cats enjoy the proverbial belly rub, and even fewer like having their feet touched, kicking the owner or shaking their feet when the owner tries to touch them. Cats have different levels of tolerance, says Dr. Richards, whose feline office mate, Dr. Mew, has become more accepting over the years of Dr. Richards toying with his feet. It makes trimming Dr. Mews claws easier now that he tolerates his paws being touched.

Another sensation that annoys some cats is being stroked against the direction of hair growth. It may be uncomfortable for the cat and, as a result, they just dont like it, says Dr. Richards. Other cats, when scratched on the neck, move their feet as if they were scratching themselves. Its called a scratch reflex, says Dr. Richards. Its usually more developed in dogs.

Petting is a formalized interaction requiring two individuals –  person and cat – with rules that govern how the interaction starts, is maintained and ends. Some cats like being petted for long periods while others may arrive at a tolerance level quickly. If petting continues, both individuals do certain things to maintain it, says Dr. Bernstein, like the person moving the hand to different sites or varying the touch from stroking to scratching to rubbing. Many cats just get up and leave when they tire of the experience. Others may be more adamant about expressing their displeasure.

A flipping tail, restlessness, tensing of the body, ears turning back and forth, sudden jerky movements, swinging the head in your direction, dilated pupils, a hiss or even a nip communicate: Ive had enough. Its really a behavioral issue, says Dr. Richards. It comes down to their own disposition. Rather than arouse your cats ire, try to respect his wishes.