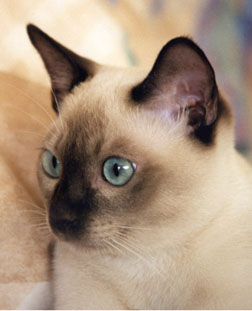 Who hasnt been transfixed by the gaze of a feline friend? A cats eyes contribute to its allure, but they also played an important role in its evolution as a predator. “Cats are a crepuscular species,” says John C. Wright, PhD, a certified applied animal behaviorist and professor of psychology at Mercer University. “A cat wakes up and hunts at daybreak or as it gets dark.”

A cats eyes are on the front of its head, rather than on the sides, like those of a bird or even a rabbit. A cats field of vision is 200 degrees as compared to a humans 180 degrees, giving the cat a wider field of vision but less binocular vision. That means that while humans can recognize a stationary object from a greater distance than a cat can, cats are better at spotting movement and therefore have an advantage when hunting prey or escaping a predator. “Cats can detect generalities at a distance,” says Dr. Wright, “but they are less able to identify specific characteristics.”

Its estimated that cats can see six times better than humans in low light. The way the brain sees is based on units of light – called photons – that hit the retina of the eye. In cats, people and other mammals, photoreceptors (cells in the eye that intercept incoming light signals) detect a signal among the visual noise and determine if it is real or a random firing. Rods detect black and gray stimuli while cones detect color. Humans have a greater density of cones, giving them better visual acuity (ability to detect detail) and better color vision than cats in bright light.

Cats rods are more closely packed, making them better able to detect objects or movement in reduced light, such as at dawn or dusk. Cats have a density of 400,000 rods per square millimeter while humans have only 160,000. “The higher the density of rods, the greater the likelihood of detecting a visual signal,” says Dr. Wright. Different photoreceptors (cones) allow your cat to discern colors, but cones require more light energy to turn on than do rods. “Because cats have relatively few cones, they dont see as many colors as humans do,” says Dr. Wright. “The retina fires when wavelengths of light hit the receptors, but cats most likely rely on shades of gray.”

You have probably noticed the mysterious glow emanating from your cats eyes when they are caught in the glare of a light. A membrane called the tapetum lucidum at the back of the cats eyes acts like a mirror. As light passes through the pupil to the receptors, it hits the tapetum and bounces back through the receptors again, allowing one photon of light to become two and thus increasing the cats nighttime visual ability. The eyes of cattle, dogs and many other mammals have this structure, while human eyes dont.

Unlike the pupil in a human eye, which maintains its circular shape whether dilated or contracted, the pupils of a cat’s eyes dilate to increase the amount of light – but contract into slits in bright light to decrease the amount of light entering the eye, functioning in much the same way as the aperture of a camera lens. “This improves focus both behind and in front of the primary object,” says Dr. Wright, “like depth of field in photography, so the cat can see a number of things sharply.”

Doorway to the Psyche

In addition to responding to physical conditions, the size of the pupils may say something about a cats emotional state. Although we cant get inside a cats brain to know what the animal is experiencing, dilated pupils are associated with retreat, and slits are associated with predation or approach. “If a cat is fearful, the eyes dilate; if the cat is assertive, they constrict,” says Dr. Wright.

For cats, staring is threatening body language. In cat-to-cat aggressive interactions, the dominant cat will maintain its gaze even though the other parts of the cat may indicate an incompatible emotional state. “The other cat will typically divert its gaze,” explains Dr. Wright, “and look left or right, probably to identify potential escape routes.”

Many cats – like their human companions – are television junkies, spending time in front of the tube watching the activity on the screen. “Cats are responsive to motion and are captivated by it for varying lengths of time,” says Dr. Wright. In addition, what appears to a human as a fluidly moving image on a television screen may actually appear to flicker to a cat, because the flicker fusion rate (the frequency at which a rapidly flickering light appears to be constant) of its retina is higher than the rate at which the television screen is refreshed.

Youll never get your cat to read an eye chart, but her behavior may show you that she doesnt have perfect vision. A cat that paws at the water dish before lowering her head may not be able to see the surface of the water. “Cats are mostly farsighted,” says Dr. Wright. “Theyre not able to focus on objects closer than around six inches from their nose.”