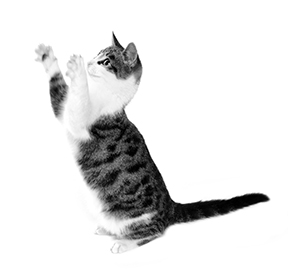 Considering that kittens vocalize to their mothers for everything they want, it’s not unusual for cats to meow or beg for food and attention from their owners. In cat-owning households, humans are the mother cats.

“There may be an underlying genetic component because the kitten who demands things survives,” says Katherine A. Houpt, VMD, Ph.D., former president of the American College of Veterinary Behaviorists and emeritus James Law Professor of Animal Behavior at the Cornell University College of Veterinary Medicine.

Another predisposing factor in begging: Cats have been bred to remain dependent and kitten-like. “If owners reward vocalizing, their cats learn this works,” Dr. Houpt says. “Adult cats almost never meow at one another.”

They Train Us. Cats use a range of vocalizations and behaviors to get what they want from people. They quickly learn that we reward meowing, crying, staring, jumping up or pawing. Although this training is often unintentional, cats beg because their owners have responded by feeding them or talking back when they meowed.

“The cat probably became trained to beg because every time he meowed, you gave him a treat because it was cute,” Dr. Houpt says. “Later you decided it was not so cute and, in fact, was a nuisance, so you rewarded him intermittently only when you couldn’t stand it any more. You have now trained him to meow many, many times for the intermittent reward.”

In her book “Domestic Animal Behavior” published by Wiley Blackwell, Dr. Houpt writes that cats respond to various types of reinforcement schedules. In laboratory studies, cats have been conditioned to meow 15 times for each small food reward. “The relevance is that if you give in to the cat after he has vocalized five times, he may meow 10 times for the next meal before he gives up,” she says.

Table Jumpers. Meowing is a common feline begging behavior, but Dr. Houpt says other food-seeking behaviors include pacing, following or rubbing against the owner, jumping onto tables and knocking objects off counters. “Although these behaviors can be annoying, most people don’t mind if their cat meows or rubs on them because it is a form of communication between human and cat.”

Cats are smart and creative, she says. “They will jump up to get your attention. I know cats who sit on dining room chairs or actually sit up and beg like a dog. But most people complain about their cats waking them and begging for food at 5 a.m.”

To stop cats from begging, ignore them. “Start ignoring the meows from the moment they’re kittens,” Dr. Houpt advises, because “the younger the animal, the quicker they learn. But not many people have the heart or patience” to ignore pets, and once they learn a behavior is rewarded, cats can be difficult to retrain. “You could try not giving food for meowing — waiting until the cat is quiet — but it’s very hard both for the owner to do and for the cat to understand that he’s rewarded for silence.”

Attention seeking is also a form of begging. “Some cats recognize you’re a captive audience and they want attention, often more than people food,” she says. “Does it bother you if the pet just sits there and looks at you? For most people, it’s the crying or vocalizing that irritates.”

Mealtime Company. Many cats may insist you watch them while they eat. “They prefer to eat when owners are there, maybe to protect them as prey animals,” says Dr. Houpt. “It’s safer to eat when the mother cat is there.”

If your cat won’t eat alone but meows for attention overnight, she recommends putting food in the bedroom with you. “There are probably several reasons that cats are active at night. One is that many of us aren’t home during the day, so the cats who want attention ask for it when you are home awake or asleep. Another reason is that cats are naturally most active at dawn and dusk, so they would like to have breakfast when the sun rises, which can be pretty early in the summer.”

Alternately, “If the cat eats only when you’re there, you could try structured mealtimes and distance yourself gradually farther and farther away while he eats,” Dr. Houpt says. And if that doesn’t work: Try feeding a less desired food when you’re around and a more appealing food when you’re absent. ❖