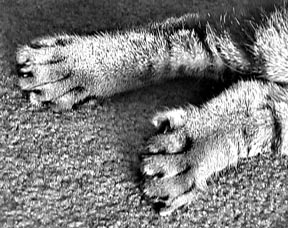 Many thanks to the hundreds of CatWatch readers who responded to our survey and sent e-mails, letters, and photographs describing their favorite extra-toed felines. There is no lack of love and enthusiasm for these beguiling big-foots. Impeccably feline, polydactyl cats are as generous with their affection as nature has been with their impressive supernumerary toes.

Our readers describe great variation in the number and placement of the extra digits. Cats with two or three extra toes up front are often called double-pawed cats by some of our New England readers. In reference to the configuration of these extra toes, some readers compare their cats front feet to catchers mitts, and name their friend for a favorite baseball player. Often an extra toe or two will be positioned in such a way that the cat appears to have an opposable thumb. Readers describe these cats as being extremely dextrous. Enterprising cats have been known to grab objects and walk while still holding the object.

While cats without extra toes are quite good with their mitts, it seems some polydactyls have a special gift. Does this account for their fabled mousing ability? One wonders. Some of our readers discovered that getting an accurate toe count from an extremely wiggly feline was more than challenging. Some toes appeared to be super-sized, while others were considerably down-sized. Partial digits or even just a solitary claw sometimes confused matters.

Polydactylous cats display the same diversity found in the general cat population. Polys, as those intimate with these sweet felines often call them, are any size, color, and pattern. We found less diversity in their geographic location; about half of our respondents live with a polydactyl in the Northeast.

Remember, this is not a scientific study, just a reader survey. The Midwest had the fewest respondents; the West and the South were almost equally represented. The observations of a former animal shelter volunteer in Atlanta, Georgia, who has relocated to Portland, Maine, agree with our findings. While it was rare for her to see a polydactyl cat in Atlanta, she describes them as being very common in Portland; she estimates that 20 percent of the cats at the shelter she has worked at for the past two years are polydactyls.

In the South, the state with the greatest number of respondents was Florida. Floridians call their polys Hemingway cats, or Hemingways, because it is thought that a friend who was a sea captain gave the author a six-toed tomcat, when he lived Key West.

The 60 cats that presently live on the museum grounds (his home is now a museum) are purported to be descendants of his cat, and about half of them are polydactyls. Whether they are descendants or not, the trait could easily spread within an island community like Key West.

CatWatch readers are a big-hearted group of folks. Our survey respondents found their extra-toed friends at animal shelters and humane societies, or rescued them when they strayed onto their property. Some were found at vineyards or interstate exits, and others were born to feral cats and adopted. Some respondents are serial poly owners; once in love with a poly, it seems no other type of cat will do.

Humor is also a common trait. One poly owner remarked that she was glad cats dont grow into their feet the way dogs do. A many-toed salute to all who contributed to the CatWatch survey!