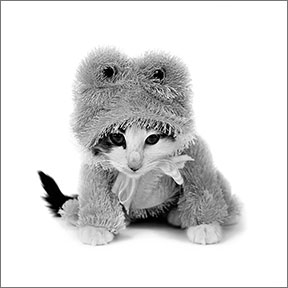 Halloween poses well-known stressors and safety risks to our cats, from ringing doorbells to scary costumes. But here are two threats we may overlook: burning candles and heated essential oils in potpourri containers.

“Cats are drawn to the flickering light and the taste of many essential oils,” says Gretchen Schoeffler, DVM, Section Chief of Emergency Medicine and Critical Care Services at Cornell University College of Veterinary Medicine.

Burn Wounds. “The most common ailments we see during this holiday are cats with burns on their paws and tails from swatting at the flickering flames and cats with horrible chemical burns on their tongues caused by lapping up essential oils from potpourri containers that spilled on their coats and they attempt to lick off,” says Dr. Schoeffler, who is board-certified in emergency and critical care.

She suggests battery-operated candles placed inside real carved pumpkins or synthetic ones to convey light without the risk of triggering house fires or causing burns to a cat. “We’ve treated cats who have had their whiskers singed or their paws burned due to playing with open flames or stepping into hot wax.”

Dr. Schoeffler’s recommendation for scented potpourri: Use containers with inaccessible lids. “If cats do ingest essential oils, the oils can cause significant chemical burns to the mouth, tongue and esophagus,” she says. “Rarely, we have seen cats so severely affected that they have had to be euthanized or have required extensive hospitalization and treatment, including the placement of feeding tubes directly into the stomach, so the burned tissues can be bypassed but the cat still receives  adequate nutrition.”

Another Problem. Although the luminescent liquid inside glow sticks and glow-in-the-dark jewelry might look poisonous, “The relatively small quantity of fluid generally has a low potential for toxicity” if pets break open the tubes, the ASPCA says. The fluid is dibutyl phthalate used in plastic and other products.
Typical signs in pets who have chewed on glow jewelry include drooling, hyperactivity and agitation, but the effects are short term, usually a response to the liquid’s bitter taste, the ASPCA says.

Light the Outdoors. In your quest to make your house the spookiest on the block, consider locating Halloween lights outdoors. Indoor lights can be too great a temptation for your cat to ignore, and he could burn himself on the lights or electrocute himself by biting on the cord. “Anything that moves and dangles attracts cats who want to bat or grab or bite,” says Dr. Schoeffler. “

Seeing strangers in costumes and hearing the front door open and close can frighten the most contented feline. Before the evening festivities begin, usher your cat into a bedroom or another room away from the party scene.
Offer plenty of amenities: a comfy bed, food and water bowls, a favorite toy. Mute the holiday noise by turning on the television or radio in that room and close the door. This offers two benefits: you know where your cat is at all times, and you prevent him from darting out the front door and getting lost or, worse, struck by a car.

“Cats are much smarter about hiding than dogs, who are more protective of their environments,” says Dr. Schoeffler. “If you know that Halloween can cause anxiety or panic in your cat, take precautions by talking with your veterinarian ahead of time. Depending on the situation, your veterinarian may prescribe anti-anxiety medication.”

Also ask your veterinarian about the use of over-the-counter calming products for your cat, such as Feliway or Rescue Remedy.

Reconsider Costumes. Some outgoing dogs are natural born clothes hounds who love the attention they get wearing a Halloween costume. Cats, not so much. Feline dignity is at stake. “You really need to pay attention to your pet’s body cues and respect him if he displays any abnormal behavior signs while in a costume, such as not moving, rolling or pawing at the costume,” says Dr. Schoeffler.

Costumes can impair a cat’s vision and mobility, press whiskers against his face and potentially contain small pieces that he can swallow and choke on. Instead, get your cat into the Halloween spirit by switching out his collar with a Halloween-themed one. Make sure that holiday collar contains an identification tag and that your cat has been microchipped to improve the chances of being reunited with you should he get lost.

Finally, here is sweet news about chocolate inside Halloween candy. Chocolate perennially ranks as the No. 1 danger to dogs, but cats lack sweet-tooth receptors and generally ignore this cache of candy. ❖