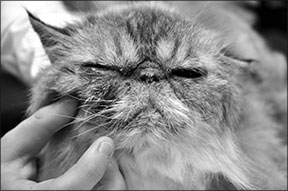 You won’t sniff out this culprit, but you’ll see its work, the strong-scented fungal infection that causes a cat to scratch-scratch-scratch his ears or chew his paws to rawness. The tiny perpetrator: an overabundance of microscopic yeast.

More than 1,500 species of yeast exist, each playing specific roles in life, such as raising bread and brewing beer. One type, Malassezia, lives on your cat’s skin and your skin, too. You’ll never notice it until something causes the balance to tip, and the usually good Malassezia go wild, leading to itchiness of a magnitude requiring a visit to the veterinarian.

Fighting Fungi. “Yeasts are a part of the normal flora of the body,” says dermatologist William H. Miller, VMD, Medical Director of the Cornell University Hospital for Animals at Cornell University College of Veterinary Medicine. “They help prevent, or slow down, the colonization of the skin by pathogenic fungi or bacteria.

“Malassezia is a normal inhabitant of the skin and ear canal. If something changes in the ecology of the skin/ear surface, the yeasts can start to multiply,” he says. “As they grow, they produce various substances which can irritate the skin and act as an allergen.”

Unlike the dog, yeast infections in cats are uncommon. The most common site for a yeast infection in the cat is in the ear canal, and it usually follows some medical or other topical ear treatment. Cats do get yeast infections of their skin, and this often signals some significant underlying skin condition.

Skin lesions are very variable and can range from a dandruff condition to an itchy dermatitis; chin acne; or bald, shiny skin. A cat with a fungal infection in his ears may show behavioral changes such as shaking or tilting the head, walking in circles and scooting an itchy rear across the carpet.

A veterinarian can uncover the reason for the symptoms and whether yeast is the culprit. Among possible causes:

Diagnosis and treatment of the infection are uncomplicated. First, the veterinarian will look into your cat’s ears with an otoscope, much as a doctor examines human ears. “Usually a smear is made and the yeast are looked for under a microscope,” Dr. Miller says. “If they are seen, a topical product may be all that is needed. In chronic cases, especially those involving the skin, an anti-yeast medication — topical or pill — is added to the topical agent.”

The anti-yeast medication may be an ointment or cream containing miconazole or ketoconazole. Treatment can take a while. “Most significant infections take 30 days or so of treatment,” Dr. Miller says. “Chronic cases can take months.” Because Malassezia are found on healthy pets, the idea behind treatment is not to wipe it out but to arrest its growth and reduce its numbers.

Iffy Home Treatments. Home remedies for skin and ear infections in pets also exist. In most cases, Dr. Miller says, “They are OK as long as they aren’t too crazy.” Cats have more sensitive ear canals than dogs, and it’s easy to irritate the cat’s ear with a product that works well in your dog. It’s best to avoid home remedies and go to your veterinarian to get the best medicine for your cat.

If your cat has allergies, the diet-yeast link is all a matter of balance, Dr. Miller says. If the cat is allergic to a food ingredient, the goal is to feed him a good diet that nourishes him yet supports his immune system without causing yeast to bloom. A veterinary nutritionist can help. ❖