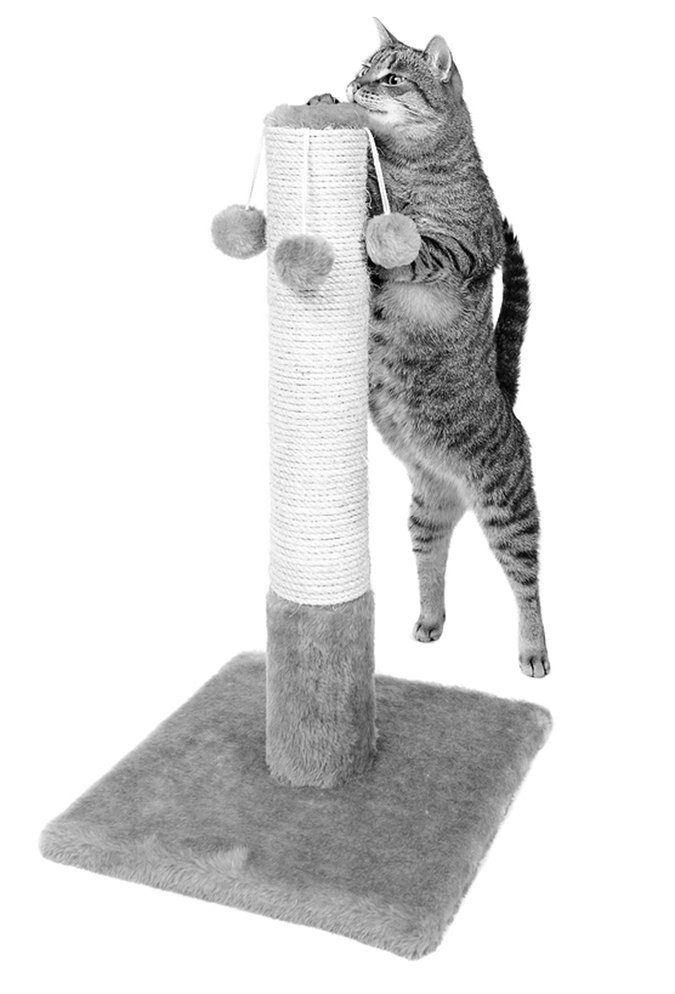 Cats can seem soft and gentle, but beneath the fur and the purr are claws that can rip and teeth that can bite into furniture, clothing, carpet and more. Scratching is the most common type of feline destructive behavior, but it can also take other forms.

“Cats may chew plants, climb curtains or knock over objects because they are playing and exploring, seeking owners’ attention, or trying to get outside,” says Pamela Perry, DVM, Ph.D., a resident in behavior and Lecturer at Cornell University College of Veterinary Medicine.

Some destructive behavior is normal. Scratching, for instance, is a means of communication. It helps cats groom and condition their claws by removing the old sheath so a new one can grow, but it is also a potent message delivery system, both visually and “scent-sually.”

Claw marks leave a message: “I, Sid, was here. Look how big I am. See how high I can reach?” In addition, the underside of cat’s paws contains sebaceous glands. When the cat scratches, these glands release chemical signals unnoticed by humans but readily recognized by other cats.

We don’t have a “Mewsetta” stone to tell us what a cat’s scratches mean, but experts have some theories. Cats could be delineating their territory: “Sid lives here. Keep out!” Or they could be communicating about themselves as individuals. “Scratching prominent objects may convey a territorial familiarity,” Dr. Perry says.

Sucking or chewing on fabric can be soothing or relaxing. In some cases, it can be a response to fear, frustration or anxiety — the result of environmental and lifestyle changes. A cat may scratch if he’s stressed by the presence of another cat, a dog who’s tormenting him or the arrival of a new baby or significant other.

Whatever the case, you can take steps to save your furnishings, sanity and, most important, your relationship with your cat. Scratching can become destructive when it’s practiced on furniture, doorways, windowsills or personal belongings instead of a scratching post, log or other acceptable target. It’s more than unsightly. It can have serious consequences for cats who engage in it. They can face a range of abuse, from being yelled at or squirted with water to being declawed, put outdoors or surrendered to a shelter.

Dealing with destructive scratching can call for creative thinking and home rearrangement. Cats scratch in areas where their handiwork can be seen and appreciated. They want their message to be visible and potentially communicated to others. That means no hiding the scratching post in an out-of-the-way corner or room.

If your cat likes to scratch a certain chair or a particular area of the sofa, give it a once over from a feline perspective. Is it in a prominent part of the room where other cats and humans have a good view of it? Try moving the object so your cat will have less incentive to scratch it. Or put his scratching post next to it so he has an acceptable place to scratch that is equally enticing.

You needn’t worry if this will ruin your dcor. Pet product manufacturers produce cat trees and scratching posts to suit almost any decorating scheme, from contemporary to traditional. Some cat trees or posts resemble elegant potted plants or striking modern sculptures.

It’s also important to determine the posture your cat prefers when scratching as well as preferred textures so you can provide them in another way. Maybe he likes to stretch up the side of the sofa when scratching. Offer him a taller vertical surface covered in sisal.

Cats who are carpet clawers may prefer a horizontally placed post lined with cardboard or a log on the floor. Some cats scratch by lying on their back and kicking. You can buy a scratching “tunnel” lined with rope or cardboard that will send him into raptures. If possible, offer a variety of scratching options and surfaces and place them in different spots so your cat can choose his favorite. Eventually, you may be able to move the chosen scratching item to an area of your choice, not your cat’s.

Whatever you choose—or build—make sure it is sturdy and stable. Your cat will never want to use a scratching post again if it falls over with or on him. Encourage your cat to use the post by treating it with fresh catnip. Run your fingers up and down it so he’s attracted by the motion and sound. Place it on or near the area he likes to scratch. Give treats and praise when you see him using it.

Some cats find comfort in sucking or chewing on fabric. They suck on or knead wool blankets, sweaters or other items made of fabric. This habit may develop in kittens who were separated from their mother at too early an age. The sucking or kneading behavior seems to mimic the warmth and comfort kittens feel when nursing their mother. Fortunately, this behavior is rare. It’s often seen in Siamese, Burmese or other Oriental breeds and may have a hereditary component.

While sucking wool is generally not harmful to cats, it’s important to put a stop to it. Cats who ingest synthetic fabrics instead of real wool can develop intestinal blockages or swallow other dangerous items such as buttons, pins, rubber bands or needles. Put items your cat likes to chew well out of reach. Offer alternatives such as food-dispensing toys or rubber toys rubbed with tasty salmon oil.

Start With the Vet

Cats can’t tell us with words what’s behind their destructive behavior, but a veterinary exam is the first step. “Cats with gastrointestinal issues may chew, lick or consume plants, carpeting or other material,” Dr. Perry says. “Fabric chewing in cats also may be due to a compulsive or dietary disorder.” One of the easiest treatments is to provide food free choice; obesity is less of a risk than a blockage.

She suggests using a “cat cam” to determine your cat’s activities when you’re not around. You may find that another pet is bullying the cat, for instance. It’s also important to make sure basic needs are met. These include easy access to food and water, toys and playtime, and appropriate amounts of attention from the humans in the household.

Enriching your cat’s environment with toys, window perches and other items to engage him may help. Give him a few minutes of playtime with a fishing-pole toy or peacock feather. Some cats like to chase small balls. Puzzle toys can keep their brains stimulated. Consider a cat’s age as well, Dr. Perry says. “Younger animals tend to be more destructive because they play and explore more than adults.”

The good news is that you don’t have to live with ravaged furniture, clothing and plants. By thinking like a cat and practicing some clever management strategies, you can protect your home and belongings and fulfill your cat’s natural need to express his nature.

Cats are Curious, Not Vengeful

Some owners blame their cat’s destructive behavior on spite or revenge. It may seem as if your cat is getting back at you for some perceived crime on your part, such as not scooping his litter box quickly enough or feeding him Turkey Surprise instead of Salmon Delight, but despite their high level of intelligence, cats don’t think at that sophisticated level.

“We should not impart malicious intentions to pets,” says Pamela Perry, DVM, Ph.D., a resident in behavior at Cornell. “Most destructive behavior is a manifestation of the pet’s normal investigative play or behavior in the absence of a more suitable or more appealing outlet. They are curious creatures who have a strong desire to explore their environment. It is up to us as owners to provide them with ample suitable outlets for their inquisitive natures.”