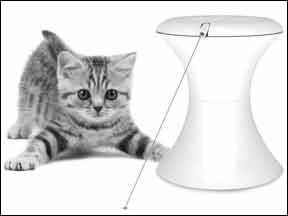 This occasional series explores the reasons for cats’ often intriguing behavior. If you would like to suggest a topic, please write CatWatch Editor, 800 Connecticut Ave., Norwalk, CT 06854, or email catwatcheditor@cornell.edu.

Cats love to chase lasers’ points of light, twirling, leaping, pouncing. They engage in the behavior with gleeful abandon for one simple reason: “The jumpy, erratic movement of the light beam can stimulate predatory-like play behavior,” says Pamela Perry, DVM, Ph.D., a lecturer in animal behavior at the Cornell University College of Veterinary Medicine.

However, owners should recognize that, as much as their cat seems to enjoy the instinctive activity of being on the hunt — and the exercise can indeed be beneficial — it’s not without several risks, Dr. Perry says. “The pursuit is perpetuated by the inability of the cat to catch the light. This can potentially result in frustration. With repeated exposures, there is concern that cats may become fixated on the light and develop a compulsive disorder. Although this happens fairly frequently in dogs, it does not seem to happen to cats.”

Limited Sensory Effect. With normal predatory behavior, the cat engages all the senses — smell, sight, touch and sound, Dr. Perry says. “With a laser light, however, only the visual sense is utilized. In addition, the erratic hand gestures of a human hardly mimic the movement of prey.”

She recommends interactive toys that can be captured and engage more of the cat’s senses, such as a small fishing pole with a “critter” on the end. “If owners are intent on using a laser light with their cat, I advise that they limit the number and duration of bouts of play and end each session by engaging the cat with a toy that he can capture to prevent frustration.”

A final caveat: Laser lights should never be shone directly at the cat’s eyes because of potential damage to the retina, the light-sensitive layer of tissue at the back of the eye, Dr. Perry says. “An alternative is to use sunlight reflected from a watch to ‘dance’ the light around the room.” 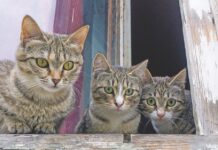