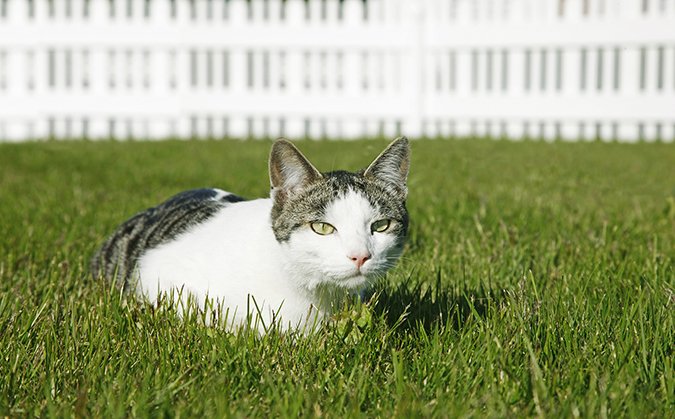 While warm weather brings out some wildlife, most creatures that could injure your cat in his fenced yard remain year-round threats. Cats typically will not engage them, but bats can swoop indoors and coyotes in a search of a meal can jump fences.

Talk to your cat’s veterinarian about the risks in your area. The list of other species that can harm your cat throughout the U.S. is extensive, ranging from venomous snakes, foxes, raccoons and skunks to Great Horned Owls.

The biggest danger results from being bitten. “Any bite wound needs to be seen immediately,” says Gretchen L. Schoeffler, DVM, ACVECC, Section Chief of Critical Care at Cornell University College of Veterinary Medicine. “Some animals can appear fine, but tissue can be crushed, and the body’s immune cells can’t get to the area where the bite occurred. Some bites are punctures. Some are a grab and pull. What you see at the surface of a bite wound is much like what you see of an iceberg above the surface. What lies below is often much more impressive and worrisome.”

First aid is not advised. “The only thing I would recommend is to apply pressure with a clean dry cloth if the wound is actively bleeding and if this can be done safely, given that the wound would be expected to be painful,” Dr. Schoeffler says. “I also recommend not giving any over-the-counter or leftover medications but rather wait until the veterinarian has a chance to make an assessment and discuss treatment options.”

Even wounds that appear to be relatively insignificant will benefit from veterinary attention. A bite wound will need to be cleaned and may be surgically explored, especially when the bite is over the neck, chest or abdomen. Underlying vital structures such as large blood vessels, nerves, the trachea, lungs and the abdominal organs are all vulnerable.

For example, “If a coyote grabs a cat around the abdomen, there is much more concern because the cat’s liver, spleen or intestines can be damaged,” Dr. Schoeffler says. “The sooner I can deal with it, the better the overall prognosis is for the cat.”

Surgery may simply involve cleaning and closing the wound over a drain or may be extensive when multiple organs have been affected or significant blood loss has occurred. At the very least, your cat’s hair will be clipped to allow for thorough examination, and the veterinarian will most likely prescribe antibiotics even if your cat seems fine.

“Bite wounds are much more likely to become infected,” Dr.Schoeffler says. “In addition to a bite creating a wound that is by definition contaminated — think about the teeth with saliva compared to a wound created by relatively clean scissors during grooming — bites always come with crushing and tearing of the tissues,” Dr. Schoeffler says. “Crushed tissue may no longer have a good blood supply necessary for speeding healing. Its absence makes the injured tissue much more prone to infection.”

If treatment is delayed and the wound becomes infected, the prognosis is uncertain. While infection can set in even with immediate treatment, the earlier antibiotics are started, the better the outcome for the cat.

Coyotes at Dawn and Dusk

Today coyotes can be found in every state except Hawaii. They’re omnivores, scavenging for livestock, rabbits, rodents, birds, carrion and — as suburbia moves into their territory — pet cats and dogs, according to the USDA’s Animal and Plant Inspection Service. “Coyotes have learned that small dogs and cats are easy prey.”

Coyotes are most often seen at sunrise and sunset and have no fear of approaching a house for food. The USDA’s advice: Feed pets inside and eliminate sources of water.

Toads in the West and South

Toad toxicity is rare but can happen when a cat pounces and takes a bite of one. Most toads taste bitter, and even cats who mouth non-toxic toads will have excessive drooling, possible pawing at the face and an episode or two of vomiting, Dr. Schoeffler says.

At least two toads are toxic, and if ingested and not immediately treated, can be fatal. The Colorado River (Sonoran) toad is found near the river and its large streams from Arizona to Southern California. The Giant Marine toad is endemic to South Texas and Florida. Signs of ingestion of either toad include crying, pawing at the mouth or eyes, drooling, respiratory distress, unsteady movements, seizures, fever and collapse. Wash the poison from the mouth with water and get veterinary care. It takes only half an hour for toxins to get into the system.

The poisons can cause irregular heartbeats, and monitoring and medications may be needed. The prognosis is poor but some cats survive.

Pit vipers inflict the most venomous snakebites in North America. In the Southeast, they include rattlesnakes, water moccasins (cottonmouth) and copperheads. Coral snakes are in the cobra family.

Snakebites tend to be seasonal and regional, usually occurring in warm weather from spring through autumn. The incidence is highest in the Southeast and West and most common among cats exploring their backyard. The effects of a coral snakebite might not be seen for hours, but most victims of pit vipers show signs within half an hour. Signs of poisoning include shock, listlessness, muscle tremors, nausea, vomiting and difficulty breathing.

“Try to identify the snake because a lot of snakes that look like venomous ones are beneficial snakes,” Dr. Schoeffler says. “Get a photo on your cell phone if you can. If you kill the snake, take a picture or bring it in, but only if you can do so safely.”

Antivenin is expensive and its availability limited because the venom must be milked from live snakes. Treatment may involve blood transfusions and supportive care with intravenous fluids. The prognosis depends on the species, the amount of venom injected, the cat’s overall health and the bite’s location.