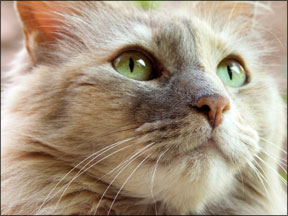 When it comes to nosing around, a cat has a major advantage over its human caregiver. The adorable feline that occupies your house has a whopping 60-to-80 million olfactory cells compared to a humans five-to-20 million cells. Because of their well-equipped

noses, cats may use their sense of smell as the primary way of interacting with their environment. “They have a large olfactory area in the nose and do a lot of sniffing,” says Katherine A. Houpt, VMD, PhD, the emeritus James Law Professor of Animal Behavior at Cornells College of Veterinary Medicine. The sense of smell plays an important role in how cats communicate with each other, their social behavior, their contact with or avoidance of other animals, sexual activity and food appreciation.

Pheromones. Like all mammals and some insects, cats respond not only to simple odors (such as a baked chicken or an open can of tuna), but also to more subtle chemicals, called pheromones, via the vomeronasal (Jacobsons) organ. The vomeronasal organ consists of a pair of tubes lined with sensory cells. Access to the outside is via the nasopalatine ducts, located on the roof of the mouth behind the incisors (front teeth). The main difference between ordinary olfactory receptors and those in the vomeronasal organ is that the latter can detect non-volatile compounds. Whereas air is analyzed by the nose, pheromones in urine or other liquids can be analyzed by the vomeronasal organ.

Pheromones are organic compounds that activate a neurophysiological mechanism that is not completely understood. The vomeronasal organ is connected directly to the parts of the brain that control social and sexual behavior. All cats detect pheromones, but the reaction may not be obvious. Some cats, however, react with the Flehman response. A cat raises his or her upper lip with the mouth slightly open and touches the tongue to the roof of the mouth where the entrance to the vomeronasal organ is located. The Flehman response can occur when a cat smells another cat, an object or even its human companion. “Its called gaping or grimacing,” says Dr. Houpt, who is board-certified by the American College of Veterinary Behaviorists. “It seems to be idiosyncratic, because not all cats do it.”

The Flehmen response seems to be most obvious among intact cats during breeding. “Females urinate, and males put their nose over it to get the molecules into their vomeronasal organ,” says Penny Bernstein, PhD, an associate professor of biological sciences at Kent State Universitys Stark Campus. “Then they can detect the breakdown of products of hormones. If its the right amount for mating, they pursue the female.”

The exact chemical composition of pheromones is unknown, but facial pheromones common to all cats have been isolated and manufactured synthetically and marketed as Feliway (which is used primarily to solve urine marking behavior). “Cats spray when anxious,” says Dr. Houpt, “and the cat that sprays is usually the odd cat out rather than the dominant cat.”

Feliway can also be used to acclimate cats to new surroundings and reduce the stress associated with moving to a new environment. “Feliway calms them,” says Dr. Bernstein. “Using facial pheromone products is like putting a photo of a boyfriend on the bedside table in a hotel room,” says Dr. Houpt. “It makes you feel better in unfamiliar surroundings.”

Scent Identification. Cats have scent glands on their cheeks, heads, mouth, pads of their feet, base of the tail and area around the anus. They deposit pheromones on objects in their environment, other cats in their group, their human caregivers and other companion animals by scratching, head-butting or rubbing their mouths, cheeks or sides against them. Scent marking is an identification process: It is the way cats define their space, the members of their social group and its dynamic hierarchy, objects that populate their environment, and the boundaries of their comfort zones, hunting domains and sexual territories. Cats leave scent markers in the same way we decorate our homes with personal memorabilia. The process tells others who they are and who lives in the space. Marking other cats, animals or humans in the social group may be simply a pleasurable part of social contact, the feline equivalent of a hug or handshake. Marking is not like installing an alarm system to keep other cats out or to claim turf.

Intact male and female cats deposit scents via urine marking. If a castrated male cat is exposed to a queen in heat, the brain hormones may become activated, but there are no testicles to release testosterone; instead, his adrenal glands may release male hormones. “Sex in cats is more between the ears,” says Dr. Houpt. Sexually altered cats urine-mark less frequently, and indoors it is often associated with overcrowding or aggression.

The Nose Knows. Cats have a reputation for being finicky when it comes to food, and the way a food smells plays a big role in whether they will eat it. A cat will turn up his nose at food that is old, spoiled or just plain unappetizing. “If canned food sits out too long, cats wont eat it,” says Dr. Bernstein.

Most cats respond to the odor of catnip. Catnip is a type of mint often put in cat toys or sold dried in containers. Cats that enjoy catnip sniff, lick or even chew it, then roll around, often developing a glazed expression. Catnip occasionally elicits a negative response, however, resulting in hissing or swatting. Roughly one-third of all cats have no reaction at all. Typically, kittens under the age of six weeks exhibit no response to catnip. If you want to give your cat a “scentual” high, offer some fresh or dried catnip.

The Litter Box. Even when the litter box smells okay to a person, it may smell bad to a cat. “Plastic litter boxes absorb odors,” says Dr. Houpt. Use of certain litters or cleaning products, particularly citrus, or the use of scented litters may discourage a cat from seeking the litter box to eliminate wastes. “Some things smell good to us and may smell good to some cats, but other cats may not like them,” says Dr. Houpt. To keep the litter box smelling clean, scoop it out daily, but also completely change the litter frequently. It helps to replace the box every year or so, as well.