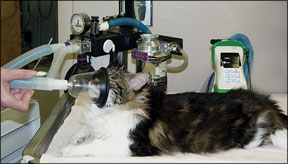 Any surgical procedure that will be painful to your cat – whether its a matter of stitching up a wound, pulling a tooth, repairing a fractured limb or removing a diseased organ – will require that the animals pain perception be dulled, if not totally blocked, by an anesthetic of some sort. Some cat owners find the notion that a pet will be placed under anesthesia a frightening prospect. What

are the chances, an owner might wonder, that the animal, while surviving the operation itself, will fail to fully regain its senses? Or worse: What if it fails to awaken from its drug-induced sleep?

“Theres always a risk,” acknowledges James Flanders, DVM, an associate professor of surgery at Cornell Universitys College of Veterinary Medicine. “But if the cat is known to be in generally good health and if the anesthetic drugs are used properly, the chance that something will go wrong is very slim.”

Dr. Flanders assessment is supported by a study published in the Journal of the American Animal Hospital Association that involved tens of thousands of cats. Results showed that for every 1,000 deaths occurring during or subsequent to feline surgery, only one could be directly attributed to anesthesia. This impressive safety record is largely attributable to gains during the past half-century in understanding the medications that are used in feline anesthesia and the techniques for monitoring, second-by-second, the condition of an animal that is under their influence.

These days, anesthesia (a term derived from the Greek word for insensibility) is used on cats to reduce or eliminate pain in procedures ranging from straightforward dental care and routine spaying and neutering to far more demanding interventions such as the mending of fractured bones, the excision of brain tumors, the removal of intestinal blockages and the repair of malfunctioning hearts.

The use of anesthetics is determined by two factors, says Dr. Flanders. First, he points out, it is simply inhumane for a cat not to be anesthetized in any medical situation that is apt to cause pain. Second, he notes, there are many procedures that require the patient to remain absolutely still. “So its a matter,” he says, “of whether the veterinarian needs the animal to be totally unconscious for a procedure that will cause pain or whether the veterinarian needs the animal to be completely immobile.”

The administration of feline anesthesia, as it is in humans, may be either general or local, depending on the nature and duration of the procedure and the origin of the potential pain. In general anesthesia, the pathways in the nervous system that transmit pain from its source to the brain are still intact, but because the brain is asleep, it will not register it. The alternative, a local anesthetic, blocks the pathways leading to the brain from a specific area of the cats body. Because the sensation is kept from being transmitted to the brain, the animal cant perceive it.

A veterinary surgeon might use a local anesthetic to stitch a wound, for example, while a lengthier and more invasive procedure – such as repairing a fractured limb or performing any type of invasive surgery – calls for general anesthesia. In the case of simpler procedures, the temperament of a specific cat may also determine whether local or general anesthesia is used. Cats are notorious for not tolerating being restrained, and some cats that, as Dr. Flanders puts it, are “not cooperative” may require either tranquilization or a general anesthetic to prevent stress and quiet the patient.

A wide variety of pain-inhibiting medications are available for use during feline surgery, with the patient receiving them by injection under the skin, intravenously or by intubation – a procedure in which an inhalant anesthetic (usually isoflurane) is delivered through a tube placed into the patients trachea. In addition to isoflurane, commonly administered agents are fentanyl, a morphine-based compound or opioid that is used for general pain relief; lidocaine, used in local anesthesia; and ketamine, an injectable tranquilizer. Many other drugs are available, however, and they are chosen by the veterinary surgeon or anesthesiologist depending on the patients age, general health and the nature of the surgical procedure. In general, the drugs differ according to the organs that they affect, the speed at which they work and the speed at which they wear off postoperatively.

The patients overall physical condition must be taken into consideration in selecting an anesthetic and its mode of delivery. For example, says Dr. Flanders, “You must be careful when giving ketamine to a cat with kidney disease because healthy kidneys are needed to eliminate the drug from the patients system. And there are some sedatives that can dramatically lower an animals blood pressure. So, prior to choosing an anesthetic, the patient has to undergo a thorough physical exam and blood-chemistry analysis. There is virtually no cat that cannot be anesthetized – but you have to select the right drugs and be very judicious about the way in which theyre used.”

Following surgery, the patient will gradually emerge from its slumber and be fully awake within a half-hour to an hour.

In a large hospital, operating room personnel will likely include a veterinary anesthetist, whose sole job is to monitor the unconscious patients stability. In local clinics, this will usually be the responsibility of an assistant who will be handling other operating room tasks as well. Cat owners should take comfort in knowing that all licensed veterinarians are qualified to administer or oversee the administration of anesthesia.

The cost to the owner of feline anesthesia will depend primarily on the condition that is being treated and the specific procedure involved. “In general,” says Dr. Flanders, “injection is inexpensive, perhaps $10 or so.” The cost of anesthetic intubation is considerably more costly – as much as $200 or $300, depending on such factors as the length of the procedure, the amount of gas that is used, and the extent to which the anesthesia must be monitored.