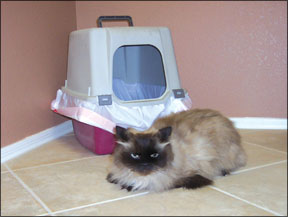 Your cat has always been a creature of habit when it comes to moving his bowels. Twice a day – once in the morning and once in the evening – he shuffles to his litter box and gracefully relieves himself.

If Plato should ever break that pattern and not move his bowels for a day or two, youd be wise to have him examined by your veterinarian right away. Its possible that he is constipated, a

condition that will probably be easily relieved if spotted early. Without diagnosis and proper treatment, however, his constipation could progress rapidly to a serious threat to his health, perhaps his life.

Constipation – the inability to easily evacuate the bowels – is a common feline malady, widely attributable in cats to a range of causes or contributing influences including faulty diet, traumatic injury, infection, adverse reaction to medication, lack of access to drinking water, intestinal tumors, neurologic disease and underlying metabolic abnormality.

The frequency with which cats routinely move their bowels varies considerably from animal to animal, says Richard Goldstein, DVM, an associate professor of small animal medicine at Cornell Universitys College of Veterinary Medicine. “Cats typically move their bowels one to three times a day,” he notes, “depending to some extent on the type of food they eat. You should be concerned if your cat doesnt defecate for a couple of days – and you should be especially worried if it seems to be straining in its litter box.” If the cat is crying out in pain as it tries to move its bowels or if there is blood in the bits of stool that it has managed to evacuate, he adds, the problem might require immediate treatment.

Dr. Goldstein also points out that prompt veterinary examination is warranted for another reason. “Straining in the litter box may be a sign that the cat may have a lower urinary tract disease and is unable to urinate properly, which would surely call for emergency care,” he explains.

In a constipated cat, the colon – the section of the lower intestine that functions as a reservoir for undigested food, mucus, bacteria and dead cells prior to evacuation from the body – has become impacted with feces that will not budge, no matter how hard the animal strains. If the afflicted cat is somehow able to partially move its obstructed bowels, the result is apt to take the form of small, hard, dry bits of stool.

Obstruction of the colon can have varying degrees of severity, says Dr. Goldstein. The most common and least severe occurrence is occasional constipation, which is generally treatable with enemas, medication and dietary adjustment. If untreated, the condition can proceed to obstipation, a more severe and stubborn fecal impaction that may require prolonged hospitalization and more elaborate therapy – for example, manual removal of hardened fecal matter from an anesthetized cats colon.

And some cats may suffer from a condition known as megacolon, in which the colon becomes grossly dilated and unable to function properly. This condition leads to very severe constipation and could eventually prove fatal without treatment, which would typically entail surgical removal of part of the colon.

Dr. Goldstein describes the process of advanced, untreated constipation as follows: “The cat is completely unable to evacuate its bowels. The intestines get stretched to the point at which translocation of bacteria begins. That is, the barrier that normally prevents bacteria from moving from the animals feces into its bloodstream is no longer functioning. The cat becomes systemically ill, and it stops eating. It just lies around, and eventually – if its not rescued and treated – it dies. This doesnt happen in a day, but it can happen within a week or two.”

According to Dr. Goldstein, diagnosing constipation is a relatively straightforward task. The procedure will typically include baseline blood tests, a blood chemistry analysis, urinalysis and the measures needed to rule out a urinary tract infection. Most important, however, is abdominal palpation, in which the veterinarians hands probe the abdominal area along the entire length of the colon to see if it is distended with fecal matter.

X-rays will be taken to confirm suspected constipation and to show us the extent to which the colon is dilated and whether a stricture appears to be present. In some instances, ultrasound imaging may also be used to rule out the presence of an obstructive tumor.

Cats diagnosed with colonic obstruction may be dehydrated. If this is the case, treatment will often begin with intravenous fluid therapy. However, describes Dr. Goldstein, the first level of care for mild obstruction will usually involve dietary change: the addition of fiber and possibly canned pumpkin or some other type of food that will promote colonic motility. This treatment, along with administration of medications that will make the fecal matter more liquid, can be carried out at home.

If these measures fail to relieve the constipation, the veterinarian is likely to try a warm-water enema, repeating the process as often as necessary to produce results. Owners can give a cat an enema at home, although they must never attempt this without being thoroughly trained by a veterinarian.