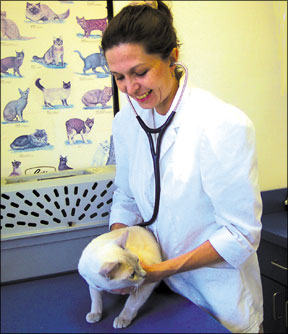 Two years ago, Alex McCarthy adopted a lively, affectionate kitten from a shelter in New York City. Alex, her cat Kit and two roommates lived harmoniously in a tiny New York apartment. Then Alex decided to move with Kit to an apartment of her own.

“The day the movers came, Kit was terrified,” says Alex. Once they were settled in the new apartment, Kit was never the same. She

would only allow Alex to go near or touch her. When visitors came, she would run up and sniff them, then hiss. If they attempted to pet her, she would lash out at them with her paws. Sometimes, she even scratched them. Now its people who are terrified of Kit.

What happened to the sweet kitten? She may be suffering from post traumatic stress disorder (PTSD), which can occur after a very stressful or frightening event – just as it can with humans.

After Hurricane Katrina, many people suffered PTSD after witnessing their families and homes destroyed by the floods. Cats and dogs also suffered from PTSD, but for different reasons, says Katherine Houpt, VMD, James Law Professor of Animal Behavior of the Department of Clinical Sciences at Cornell Universitys College of Veterinary Medicine. “Many cats were abandoned, and then chased through the streets by hungry dogs after the waters subsided. These cats often had no food, and were later picked up by strangers and put into shelters.”

There are a several events that can be traumatic, says Dr. Houpt. “By far the most common trauma cats face is moving – being removed from their environment and placed in unfamiliar surroundings.” In fact, going to a shelter is one of the most traumatic situations cats face, says Dr. Houpt. “Cats who were held in shelters will often hide for about 10 days in their room before coming out to socialize.”

Another cause of PTSD is when a cat is attacked by another cat (or dog). If you have several animals in your home, you may not even realize whats happened until you see your cat behaving fearfully. There are cases of redirected aggression, says Dr. Houpt, when a cat will see something that scares it, perhaps out the window, and then turn and attack another cat sleeping peacefully nearby. “This attack comes out of nowhere and the victimized cat can be quite traumatized by this event.”

As with everything, not all cats react the same way to fearful events. It depends on their genetics and individual temperaments, says Dr. Houpt. “One of the worst cases I saw was when two cats were moved to another apartment after their human companion suddenly died. One cat adjusted fine; the other cat, however, wouldnt come out from under the bed for weeks.”

The Signs of PTSD

Cats who have been traumatized may act in a variety of ways, but the most common element in their behavior is fear. They may hide under the bed, closet or corner for extended periods of time. They may run from strangers who enter the home when they had always

been friendly. They may avoid another cat or dog with whom they had previously played.

The fear can also manifest itself in different types of aggression. “One way to distinguish between the types is by the cats posture,” says Dr. Houpt. “If a cat hisses and scratches, thats most likely fear-based or defensive aggression. Something has caused that cat to be afraid.” On the other hand, if a cat jumps up on you and bites you, thats more of an offensive aggression. “And if a cat comes from behind you and attacks you, thats characteristic of predatory aggression,” says Dr. Houpt.

Sometimes kittens and young cats exhibit fearful or anti-social behavior toward humans. This may be interpreted as PTSD, but its more likely the result of a kitten missing the important socialization that occurs between two and seven weeks of life. The kitten may have been abandoned by its mother or raised apart from its siblings. This is different than a traumatic event that causes the behavior changes associated with PTSD.

Fortunately, there are a number of things you can try to help your cat overcome PTSD. First, if your cat is behaving fearfully and you cant connect its behavior to a recent event – such as a move or an attack by another cat or a dog – get your cat to the veterinarian to rule out any underlying illness which could be causing the changes. Here are some other steps to take:

As with humans, time, patience and love is the best medicine for helping your cat overcome PTSD, and start feeling and behaving more like his own self again.