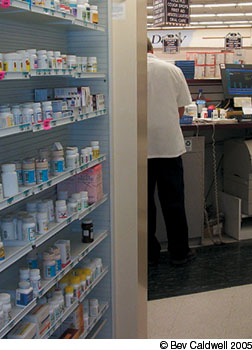 If you have a hard time administering pills to your cat, a compounded medication may be the solution. According to the American Veterinary Medical Association, compounding is the manipulation of a drug, other than in accordance with the FDA approved label, to make a different formulation of the drug to meet the needs of a specific patient.

What is Compounding?
Compounding a drug includes adding flavoring to make it more palatable, creating an oral suspension or injectable solution from crushed tablets, mixing two injectable drugs into one or creating a transdermal application of a medication not manufactured transdermally – that is, a medication applied to and absorbed through the skin. An example of the latter is making a transdermal solution from Tapazole or methimazole (generic tapazole) that can be administered via the ears to treat hyperthyroidism. Compounding may also make a normally unavailable drug available, such as Cisapride used to treat constipation in animals by increasing colon motility.

Compounding changes the delivery mechanism of a drug to make it easier to administer to cats that are difficult to pill. Compounding may be the only way to get something into the cat, says Mary Lynch, DVM, director of the pharmacy at the Cornell University Hospital for Animals. Compounding may also increase the absorption time and eliminate potential damage to the cats esophagus from dry-swallowing pills.

A cats health may be extremely dependent on a particular drug, and compounding the drug may be the only way for an owner to get the medication into the cat.

Compounding may increase owner compliance, says Drew Weigner, DVM, who is board-certified by the American Board of Veterinary Practitioners. If I instruct a cat owner to do something he or she cant do, it wont help the cat.

Difficulties and Risks
Compounded drugs are created to meet the needs of a specific patient and fall under the purview of both federal and state guidelines. Some states require compounded drugs to be used in the veterinarians office rather than allowing them to be dispensed to the client. The Animal Medicinal Drug Use Clarification Act governs the compounding of medicines for animals.

While compounding may make the medicine go down in cases where it might not otherwise be ingested or absorbed, compounded drugs are mixtures that do not meet the approval of the Food and Drug Administration (FDA). While the FDA has oversight, it is not going to withhold a drug from a specific patient. The FDA is looking more for illegal drug manufacturing, says Dr. Weigner, whose practice is The Cat Doctor in Atlanta, Georgia. Compounding drugs for any patient rather than for a specific one, or making it in large amounts, is crossing the line.

The absorption of manipulated drugs is still largely untested. Creating a liquid from a tablet is most likely safe and effective compounding, but the dose is less exact and the stability is uncertain. Cats with hyperthyroidism may be prescribed a transdermal formula. The medication is administered by rubbing the gel on the inside of the cats ear.

While this may be more acceptable to the cat, its absorption may not be as good as giving the medication in pill form. Study results have been mixed. The main issue is that the effects of compounding are unknown for most drugs, says Dr. Weigner.

Transdermal medications pose a potential hazard to people who administer the drugs to their cats. If a drug can be absorbed through the animals skin, then it can be absorbed through the persons skin, particularly if it is used every day, says Dr. Lynch. To avoid absorbing the medication yourself, wear gloves or wash your hands immediately following application. In most cases, small quantities wont hurt you, but you may become allergic to it, says Dr. Weigner.

Alternatives
If you have doubts about whether your cat can take medicine in the prescribed form, discuss it with your veterinarian. Some medication comes in liquid form rather than tablets, which may be more acceptable to you and your cat. Others can be mixed in food. If the medication is flavorless, your cat probably wont notice, but some taste terrible, and your cat will resist food with the drug mixed in.

Some medications are manufactured with flavorings, such as tuna, that appeal to most cats. Mixing medication into food does not constitute compounding. Mixing in food cant be done with every drug, cautions Dr. Weigner. But its less expensive, and its legitimate to do.

Before crushing your cats pills and mixing them with food, ask your cats veterinarian if this will change the effectiveness of the medication. If you must crush a pill to mix with your cats dinner, crush it completely. If the dose contains chunks of uncrushed medication, your cat is likely to find them and spit them out or eat around them. Crush the pill completely and mix it with something strong-tasting that the cat likes, such as tuna or liverwurst, says Dr. Weigner. Feed the cat when she is hungry, and mix in a small amount of food so she will eat it all.

Compounded drugs should be prescribed by a veterinarian, although a pharmacist may create the compounded form. They should be used only in situations where the use and effectiveness have been tested and for those cats that resist taking the drug in the manufactured form. In most cases, your veterinarian will deal with a specific pharmacy that compounds the drug according to the veterinarians specifications, but you may have to find a pharmacy on your own. Know who youre dealing with, says Dr. Lynch. Check out the company.

Expiration Dates Matter
As with any medication, the shelf life of a compounded drug is finite, so store it according to your veterinarians instructions. I tell clients to buy only two weeks worth of medication at a time and store it in the refrigerator, says Dr. Weigner.

And also as with all medications, use of compounded formulas for your cat should be monitored, and any problems or side effects reported to your veterinarian.