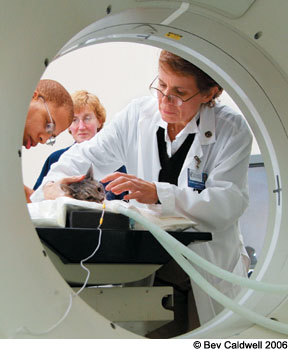 Its a common occurrence. An obviously suffering cat is brought to the Cornell University Hospital for Animals (CUHA) in Ithaca, New York, its frantic owners desperately hoping for immediate diagnosis and treatment of whatever is bothering the unhappy animal.

In some cases, a cat may be having trouble moving air in and out of its nasal passages. Or it may have a constantly runny nose. Or perhaps its been acting odd for the past several weeks, walking around in circles with its head tilted to one side or sitting by itself in a corner, staring vacantly into space.

Any of these troubling signs may indicate the presence of a minor and easily remedied condition – a bad cold, for instance, or an ear canal thats become infested with mites. On the other hand, they may suggest that the animal is suffering from a serious, perhaps life-threatening disorder, such as a tumor in the inner ear or brain.

The source of the problem may be immediately obvious to an experienced veterinarian. If it isnt, a complete blood count, a blood chemistry panel and other lab tests may shed light on the matter.

But some cases may defy diagnosis until a sophisticated radiologic examination is brought into play. And for this, veterinarians at the hospital are very likely to recommend that the ailing cat undergo a CT (computed tomography) scan.

Extensive Application
For the past decade at CUHA, CT scans have been invaluable in identifying various feline disorders as well as excluding the presence of others, says Peter Scrivani, DVM, an assistant professor of radiology at Cornell Universitys College of Veterinary Medicine. In recent years, he says, CT – which combines X-ray imaging and computer technology – has also become increasingly useful in preparing animals for surgery and in pinpointing specific areas of the feline anatomy that are to be treated with radiation therapy.

CT scanning made its debut as a diagnostic imaging technology for humans in the early 1970s, at which time the method was generally referred to as computerized axial tomography (CAT) scanning. It was in the mid-1990s, according to Dr. Scrivani, that this technology became extensively used in veterinary medicine. The term axial, he points out, means that youre getting a cross-sectional image, one that cuts across the axis of a target area in the patient. In veterinary radiology, we refer to this as a transverse, rather than axial, image. The term tomography is derived from the Greek words for volume and measurement.

The Basics
In conventional X-ray technology, he explains, We direct a fan-shaped beam through the patients body, focusing on the area that we want to examine. The X-rays pass through the body and onto a film, with different tissues absorbing varying amounts of the rays. If a tissue absorbs a large number of X-rays, fewer rays will reach the film, and that part of the resulting image will be white or a shade of gray. If no rays are absorbed, that part of the film will be black.

This basic concept applies to CT, he points out. But in CT, the patient lies on a movable table that slides slowly into the donut-shaped portal of a cylindrical X-ray machine. A series of exposures are made as the X-ray tube spins rapidly around the patients body, sending narrowly focused X-rays through it to detectors on the opposite side of the tube. The accumulated data are immediately transmitted to a computer, which processes the information and yields, almost instantaneously, a cross-sectional image of the area under study.

Each time the X-ray tube spins around the patient, Dr. Scrivani says, a single slice is recorded. Well then move the patient a bit farther into the machine to give us another image, and so on.

In order to avoid a blurred image, the patient must lie motionless throughout the examination, which typically lasts, at most, for minutes. Humans are usually able to remain still, but animals must be given general anesthesia for this procedure.

A Clearer Picture
The chief advantage of CT over conventional X-ray, says Dr. Scrivani, lies in its ability to produce cross-sectional images that can be reconstructed into three-dimensional images, whereas X-ray images are confined to two dimensions. In addition, he notes, the contrast resolution in CT images, which can be manipulated by a technician, is superior to the gray scale characteristic of X-rays. This allows us to clearly differentiate more tissues, he says. (In some cases, such as those involving examination of a cats spinal cord, the animal will be injected with a contrast medium to enhance the differentiation of tissues.)

In veterinary radiology, CT is especially well suited for diagnosis of lesions in the brain, for bone and muscle disorders, and for producing precise images of organs lying within the thoracic cavity – the area of a cats anatomy that is bounded by the ribs. In cats, says Dr. Scrivani, the technology is most frequently used for evaluating sinonasal disorders – those affecting the nose and sinuses – and for signs of ear disease.

In addition, veterinarians will often rely on CT scans preoperatively to identify the specific location of a tumor, to guide a needle to the exact area from which tissue is to be removed for a biopsy, or to demarcate with precision a cancerous growth that is to be treated with radiation therapy.

Alternative Imaging
Although the advantages offered by CT scans compared to conventional X-rays are clear, their superiority over other innovative imaging methods such as ultrasound and magnetic resonance imaging (MRI) depends on several factors. For example, an ultrasound examination, which uses sound waves to produce an image, is less expensive than CT and does not require the patient to be anesthetized. However, an ultrasound procedure takes far longer to generate an image.

As for MRI, in which the patient is placed within a strong magnetic field, Dr. Scrivani says: It is comparable to CT in that it produces cross-sectional images and the patient must be anesthetized. However, it takes much longer to do an MRI – about 45 minutes, compared to just a few minutes for CT – and MRI is significantly more expensive.

At CUHA, he says, the typical MRI exam will cost about $1,000, but at other veterinary hospitals the cost can run to as much as $2,000. By comparison, the cost of a CT scan at CUHA will typically range between $250 and $700, depending on the complexity of the disorder being evaluated and the number of views that are needed.

Facility and Staff
Dr. Scrivani describes the CT procedure at CUHA as follows: The facility is an extremely large room, since we evaluate horses as well as cats and dogs. It is divided into two sections separating the personnel from the X-ray equipment to make sure they are not repeatedly exposed to radiation. The staff – typically a radiologist, an imaging technician and an anesthetist – are in a separate modular area, behind a large glass window. That area is equipped with a computer and a monitor for viewing the images.

In the center of the room is a table, about eight feet long, and the scanner, which looks like a large square with a tunnel in the center. During the scanning, the table slides in and out of the tunnel.

From our control room, which is about 30 feet away from the CT machinery, we constantly take readings to make sure that the patient is doing well under anesthesia, and we monitor the images.

The duration of the entire procedure varies. The imaging itself usually takes just a couple of minutes, but the set-up and the steps we take to make sure that the patient is stable and wont wake up under anesthesia will take considerably longer. In any case, were usually in and out within a half-hour or so.

During the course of a CT scan, he notes, the patient will be exposed to more radiation than in a conventional X-ray exam. But the risks involved with exposure during a single procedure are far outweighed by the benefits to be gained from the examination.

-In an upcoming issue, CatWatch will explore the relative advantages of CT, MRI and ultrasound.