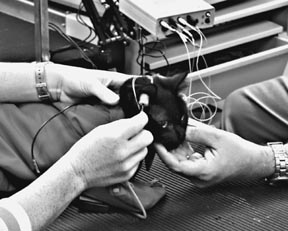 Whether they are born to be deaf or lose hearing later in life, most cats readily compensate for the loss – if their human caretakers discover the disability and help them learn to adapt.

If a cat is deaf in only one ear, we may not even know it because the animal is compensating so well, says George Strain, PhD, a professor of neuroscience at the Louisiana State University School of Veterinary Medicine who conducts research into inherited deafness in cats and dogs. Cats that are totally deaf in both ears need to be protected from unexpected dangers they cant hear, but they usually make good pets and enjoy a good quality of life.

The kind of deafness Strain studies – congenital hereditary sensorineural deafness – occurs mostly among white-haired animals. In the canine world, Dalmatians are the most likely to be born (hence, the term congenital) with genetic defects (hereditary) that disable sensory organs and nerves (sensorineural) and cause them to go deaf by 3 weeks of age. Among cats, the condition crosses breed lines with one common denominator: An all-white cat with two blue eyes has an 80 to 85 percent likelihood of being deaf in both ears from birth.

The culprit is at least one gene, the so-called W gene that suppresses production of melanocytes (color pigment cells) in skin, hair, and the irises of the eyes.

Another consequence of this genetic defect is degeneration of vessels that would carry blood (and potassium, in particular) to the cochlea, that indispensable snail-shaped organ in each inner ear where sound waves are translated into nerve impulses.

Without an adequate blood supply, one or both cochlea will collapse, and auditory nerves between the ears and the cats brain are irreparably damaged. Even as a kitten tries to develop its sense of hearing in the first days after birth, a key part of the auditory apparatus is gone forever.

Possibly polygenic
But the story is not as clear-cut as that, says Strain, noting that W is a dominant gene, and a condition linked to a dominant gene should be inescapable in every case. Theoretically, every all-white cat should have two eyes of blue (actually colorless eyes because the irises without pigmentation reflect natural light as blue) and be deaf in both ears. The fact that theyre not – some white cats with blue eyes have normal hearing, as do some with just one blue eye, while some are deaf in only one ear and so forth – leads researchers like Strain to suspect a polygenic condition, caused by two or more genes that sometimes conspire, although not always in the same way or to the same degree.

So, Strain is working with collaborators at Texas A&M University to probe the genetic mysteries of inherited deafness in dogs. Because of similarities in the canine, feline, and human genomes, discoveries about inherited diseases in dogs often shed light on similar conditions in cats (and even in humans, where people with deafness, blue irises, and stripes of white hair are said to suffer from Waardenburg syndrome, a disease named for Petrus Johannes Waardenburg, a Dutch ophthalmologist [1886-1979] who was the first to notice that people with two different colored eyes frequently had hearing problems).

Most other causes of deafness in cats are termed as acquired (rather than hereditary) and as later-onset (rather than congenital) although some can start while the kittens are in the womb. Deafness due to anoxia (insufficient oxygen), ototoxicity (overexposure to drugs or toxic chemicals), otitis (infection), or anesthesia can begin either before or after birth, Strain states in a user-friendly web site (www.lsu.edu/deafness/deaf.htm). Ironically, some drugs used to treat ear infections in cats can cause deafness if they are improperly or overly used, he notes.

Partial – and not necessarily permanent – loss of hearing can be a conductive problem when outside sound is not conducted to the hearing apparatus because something is blocking the way. Treat the inflammation from infection or ear mites and remove excess wax or other crud, Strain says, and hearing usually returns. Even some kinds of injuries, including punctured eardrums, can heal, he says.

Cant hear what?
But the damage from repeated exposure to extremely loud noise is cumulative and irreversible. Also permanent is presbycusis, the gradual loss of hearing due to advancing age. Just like presbyopia (the loss of visual acuity), presby means old and presbycusis happens to all of us, cats and humans alike, Strain says.

If a veterinary examination confirms hearing loss but fails to uncover an obvious cause, such as infection, an electrodiagnostic test may be recommended. Most widely used is the BAER (for brain stem auditory evoked response) according to Strain, who has conducted thousands of the tests for electrical activity between the cochlea and the brain. Dogs hardly notice the very tiny electrode needles under their skin and neither do cats, although I like to hold a cat in a Velcro bag, with just his head sticking out, for my own peace of mind, he explains. The BAER test is performed at major veterinary hospitals, including many university-based clinics, as well as at some medical centers where the test is routinely given to newborn humans. Fees can range from about $40 to $150.

If tests confirm a diagnosis of deafness, then the human companions work begins, although the cat has already begun substituting other senses for the loss of hearing, Strain says. Think of all the dangers that sound warns cats about – the car passing in the street or the dog running across the lawn – and protect your cat from those dangers. In most cases, deaf cats are safer if kept indoors, he advises.

At the same time, humans need to watch for suddenly startled deaf cats, the neuroscientist says. Give some other kind of warning when approaching a deaf cat – stepping heavily on the floor or flashing lights, for example – and the cat is less likely to scratch or bite in a self-defense reflex. Young children, in particular, should avoid startling a deaf cat.

Not in my ear!
Dont bother saving for a feline hearing aid, Strain says. For one thing, hearing aids work by amplifying sound for ears that still have function in all the right parts and wont help if the cochlea or nerves are permanently destroyed. And while hearing aids for dogs have been experimentally tested, many dogs hated having foreign objects in their ears. Can you imagine, he says, trying to keep anything in a cats ears?

Better to spend the money on interactive cat toys that engage the deaf ones other senses, Strain suggests. Youll be surprised how well the cat adapts. With compassionate care and consideration of his disability, life with a deaf cat can be quite rewarding.