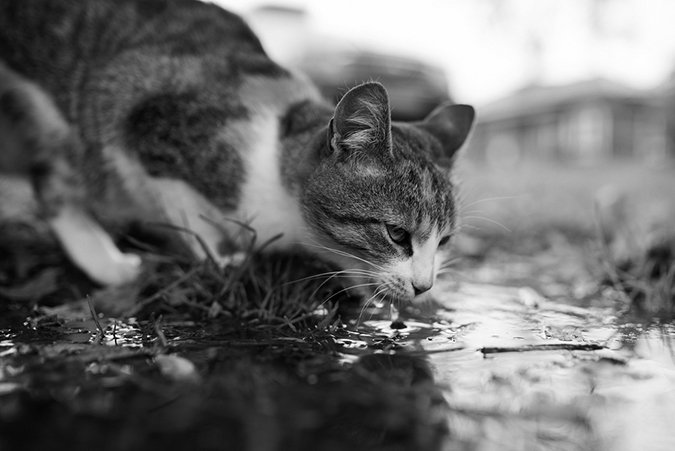 Every time your cat nuzzles up to a neighbor’s cat or scratches in wet soil where another cat has relieved himself, he runs the risk that he will pick up an uninvited guest: the parasite called giardia. It survives throughout the country in any place that’s wet or damp, and thrives inside its hosts.

“Infection rates will vary depending on geographic location but one study has shown the rates to be about 10 percent in cats,” says Brian Collins, DVM, Section Chief of the Community Practice Service at Cornell University College of Veterinary Medicine.

Giardia lives in the environment anywhere there is enough moisture to support it. It’s in backyard puddles, ponds, lakes and rivers. It can live in damp environments for many weeks. When the environment is dry, it dies. The parasite passes from cat to cat through contact with fecal material, even traces of it that a cat licks from himself or another cat.

The good news is that giardia infection — giardiasis — is treatable. The risk of cats infecting humans appears to be very low, and good hygiene helps with prevention.

Giardia is a one-celled parasite that’s visible under a microscope as a flattish droplet shape with flagella, whip-like structures that help it move. Many types of giardia exist, each type suited to a particular species of host. Once in the host, giardia attaches inside the small intestine, absorbing nutrients and splitting into more giardia. During the infectious stage, cats shed giardia cysts that can infect other cats in their feces.

Kittens at Risk for Giardia Infection

The parasite infects cats who swallow it. Kittens have a greater risk than adult cats, as does any cat living in crowded conditions where another cat might expose it. Kittens are generally more susceptible to disease because their immune systems are immature.

That’s the tricky part: There may be no signs. But when signs do appear, they include diarrhea that’s persistent or intermittent, and may contain mucus. Other symptoms are vomiting and weight loss.

A cat who shows symptoms needs to visit a veterinarian for tests. The most common is examination of a fecal sample under a microscope to look for either trophozoites, the growth stage of giardia in the intestine, or cysts, the encapsulated infectious stage, Dr. Collins says.

It’s recommended to check cats twice annually for gastrointestinal parasites in general,” Dr. Collins says. “This would include scanning for giardia, but routinely testing healthy animals for giardia is not necessary. Animals with a history of giardia and clinical signs compatible with giardia may warrant more specific testing.”

In treatment, veterinarians may prescribe febantel, fenbendazole and metronidazole in powder, tablet or liquid forms. “The medications are not expensive and can be given at home by the client,” Dr. Collins says.

In addition, it’s important to give the patient plenty of water and food during treatment. “Water to avoid dehydration and food to provide important nutrients and calories, especially in kittens,” Dr. Collins says, adding that giving the cat a bath after treatment helps to reduce the possibility of re-infection.

Then healing begins. “Significant damage to the small intestine can occur from giardia infections, but fortunately the changes are reversible,” Dr. Collins says, “and some cats are able to fight off giardia on their own and will never need to be treated.”