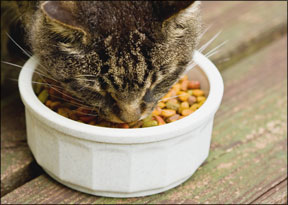 Digestive system disorders in general are among the most frequently observed health problems in cats. While many of these disorders are primarily associated with organs such as the liver, pancreas and gall bladder – all of which play a crucial role in the digestive process – plenty of them are centered in the alimentary canal, the long tube leading from a cats mouth to its anus.

Most Common. By far the most prevalent feline digestive tract disorder, says Dr. Bartges, is inflammatory bowel disease (IBD). The condition, characteristically evidenced by chronic vomiting and diarrhea, is widely thought to be the consequence of several different disorders involving the feline immune system. The changes that are consistently found upon microscopic analysis in the lining (mucosa) of an affected cats intestines – a superabundance of immune system cells, for example – suggest that abnormal immune system activity may precipitate the disease.

The process involved with IBD, says Dr. Bartges, is as follows: “Something initially damages the intestinal tract and makes it sort of leaky. As a result, certain large proteins in the animals food that should be broken down before they are absorbed are instead absorbed without being digested. Then these large proteins are recognized as alien substances by the immune cells that line the intestinal tract, and that sets off the inflammatory immune response. In time, this inflammatory response damages the mucosa.”

Although IBD is most frequently diagnosed in older cats, advanced age in itself has not been conclusively identified as a risk factor for the condition, and the disorder can affect animals of any age. And although chronic vomiting and diarrhea are the most common clinical signs of the condition, other indications that a cat is afflicted with IBD include decline in appetite, weight loss, frequent passing of gas, audible rumbling in the animals gut, difficulty in defecating and blood or mucus in the stool.

“IBD is diagnosed in two-thirds to three-fourths of all feline digestive system diseases,” says Dr. Bartges. However, it is a disease in which morbidity (the incidence of the illness) is high but mortality (the rate of death from it) is relatively low, although some affected cats may have to be euthanized due to uncontrollable vomiting, diarrhea and malnourishment.

Dental Problems. As the mouth is considered to be an indispensable functional component of the GI tract, it follows that dental disease must be viewed as a disorder of the digestive system. As such, says Dr. Bartges, it ranks second-highest in prevalence, after IBD, among cats of all ages and possibly as the number-one digestive disorder among geriatric cats.

Among the various dental problems that can afflict a cat, the most common is periodontal disease, which occurs in an estimated 85 percent of cats over the age of six. In this disease, layers of plaque accumulate and harden on a tooths surface. Bacterial poisons from the plaque eventually prompt an inflammatory response in the gums that, if untreated, leads to severe gum inflammation (gingivitis) and, if not treated promptly, to infection and irreversible destruction of the tissues supporting the teeth (periodontal disease). Any oral infection, of course, can become systemic and ultimately life-threatening; certainly, a cat with periodontal or any other type of dental disease is likely to have a diminished interest in its food, with potentially severe physiologic and behavioral implications.

Other Conditions. Among other relatively common disorders of the digestive tract, Dr. Bartges cites tumors, which can be either benign or malignant, and can develop anywhere within the digestive system or migrate there from other parts of the body. Squamous cell carcinoma, for example, may develop in a cats mouth, he points out. And in the intestine, a tumor can cause a blockage resulting in frequent episodes of vomiting and diarrhea. If such growths remain untreated, they can spread, increase in size and eventually prove fatal.

Inflammatory conditions other than IBD are also frequently seen. They are often caused by infection with such microorganisms as feline immunodeficiency virus (FIV), feline panleukopenia virus (FPV) or – especially in kittens – feline coronavirus (FCoV), which, in rare cases, can lead to feline infectious peritonitis virus (FIP). Digestive system inflammation can also result from an allergic reaction to food or an environmental allergen.

The feline digestive tract can also be assaulted by the ingestion of such toxins as insecticides and household cleaners, and by certain poisonous plants.