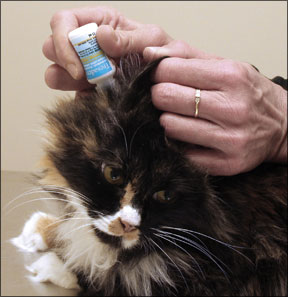 Among a normal, healthy, and properly cared-for cats many distinctive attributes is its astoundingly acute sense of hearing. While the human auditory system is capable of detecting sounds ranging in frequency up to about 20,000 vibrations per second, cats typically can sense sounds pulsating at 60,000 vibrations per second or greater. This impressive acoustic sensitivity has been honed over the ages to serve a cat in countless ways – signaling

the stealthy approach of a dangerous predator, for example, or detecting the underground movement of a burrowing rodent.

Although most cats will go through life without experiencing a serious problem with their ears, owners should know that a variety of conditions – including congenital defects, infections, trauma and age-related changes – can be extremely painful and may compromise an animals hearing. Most feline ear disorders are readily treatable and will not result in permanent hearing loss, notes James Flanders, DVM, an associate professor of surgery at Cornell Universitys College of Veterinary Medicine.

However, some conditions may render a cat partially or totally deaf, especially if they remain unrecognized and untreated.

A cats ears, like those of other mammals, are made up of three structural areas: the outer ear, middle ear and inner ear. The outer ear consists of the external earflap (pinna), and the ear canal – a narrow tubular passage through which sound vibrations enter the ear from the outside environment.

The middle ear contains the eardrum, a taut membrane that vibrates according to the incoming sound waves, and the auditory ossicles, small bones that transmit the eardrum vibrations to the inner ear. And the inner ea – located deeper within the skull – contains the cochlea, a snail-shaped structure containing nerve endings that receive the vibrations and passes them along to the brain, thereby enabling a cats hearing. The inner ear is also the site of the vestibular system, a complex arrangement of nerves and receptors that govern a cats sense of balance.

Some feline ear abnormalities are genetically transferred from parents to offspring. Among these is an inherited condition known as “fold-ears,” in which the tip of a cats pinna is bent sharply either toward or away from the skull. This bizarre condition is not often associated with hearing loss. However, cats whose ears are unusually distorted in this manner frequently experience accompanying skeletal problems that may have troublesome consequences.

Another primarily heritable abnormality, says Dr. Flanders, is atresia – a defect in the development of the ear canal that may

result in partial or total obstruction of the channel. “In this condition,” he points out, “a wall develops in the ear canal that makes it difficult or impossible for sound to reach the cochlea. Its sometimes operable, and if this wall can be removed, hearing can potentially be restored.”

Some cats are born deaf, and the disability cannot be corrected. Due to an anomaly in their genetic makeup, white cats with blue eyes are at greatest risk for congenital deafness. Indeed, says Dr. Flanders, “About 80 percent of white cats with two blue eyes will start to show signs of deafness when they are about four days old as the result of cochlear degeneration.”

The great majority of feline ear disorders are acquired. A cat that fights a lot or is in the habit of scratching its ears excessively, for example, might experience hematoma, a collection of blood from broken vessels that collects between the skin covering the ear and the underlying cartilage. Cats may also be afflicted by various polyps (small growths protruding from the surface of a mucous membrane) and squamous cell carcinoma – a cancer that can emerge on the ear tips and is especially common in cats that are frequently exposed to harsh sunlight.

Owners should also keep in mind that a cats eardrum thickens with age. Thus, hearing difficulties and potential deafness are often found in geriatric cats. Moreover, deafness can occur as a side effect of various medications – certain antibiotics or diuretics, for example.

Among all acquired feline ear conditions, Dr. Flanders notes, the most common by far is otitis externa, an infection of the outer ear canal. This disorder results from infestation of the ear canal with infectious agents, usually ear mites.

Otitis externa is most prevalent in cats that are especially susceptible to seborrhea, a skin ailment marked by excess oily secretions from the sebaceous glands. This results in the accumulation of surplus ear wax in which invading mites, bacteria, and other organisms can flourish. If otitis externa is not appropriately treated, the infection can migrate to the middle ear, where it is termed otitis media, and to the inner ear (otitis interna). In the most severe cases, the ear drum and inner ear can be irreparably damaged, resulting in deafness and – because of the conditions impact on the vestibular system – an acute disturbance of balance on the affected side or sides.

Most feline ear disorders, including otitis externa, can be treated with medicine, says Dr. Flanders, although surgery may sometimes be the only option. Unfortunately, deafness in one or both ears is most often a permanent condition.

A few simple measures, he points out, will substantially reduce the chances that a cat will experience a serious ear disorder. He advises the following:

-Minimize the amount of time that your cat – especially if it is white or lightly pigmented – is exposed to direct sunlight.

-Maintain a clean environment that will discourage the proliferation of ear mites and other potentially infectious agents.

-Routinely examine your cats ears for such signs of infection as swelling, discharge, discoloration and the collection of dirt and debris.

If you observe your cat persistently scratching at its ears, do not probe into them to find the cause. Instead, consult your veterinarian as soon as possible.