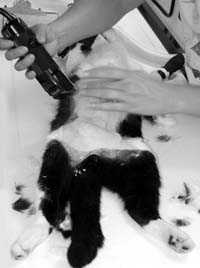 You and Tina, your 10-year-old Persian, are stretched out comfortably together on the living room sofa, gazing peacefully at the setting sun. Youre doing what she likes best – gently stroking her chest and belly. And shes doing what you like best – purring contentedly. But then you notice something disturbing.

It seems that a small lump – less than a half-inch in diameter – has developed beneath one of the four nipples on the left side of her chest. You gently palpate the other three on that side and find nothing unusual, after which you turn your attention to the four nipples on the right side (the other of her two parallel mammary chains). Nothing noticeable there, either.

There is no sign whatsoever that the lump is painful to your cat. But your concern persists, and the next morning, you take Tina to a nearby veterinary clinic. A physical exam indicates that shes in generally good health, save for the presence of an obvious tumor. Although the growth could be benign – self-contained and harmless – a full evaluation is required to determine whether the tumor is malignant and has spread (metastasized) into other tissue.

Bad News, Good News
Unfortunately, the diagnosis is feline mammary gland cancer, and the tumor is malignant. Fortunately, the cancerous mass has not yet grown to the extent that it is invading tissue beyond the mammary area. It has not spread into the lung or other parts of your cats body. It is completely confined to the tissue surrounding that one nipple. And the veterinarian is confident that the cancer can be removed – and Tinas happy life will be extended – through immediate surgical intervention.

In Tinas case, this will involve mastectomy, the removal of the entire left mammary gland chain. The right chain, you are told, can remain intact, although the veterinarian may recommend its removal as a preventive measure.

According to Rodney Page, DVM, director of the Sprecher Institute for Comparative Cancer Research at Cornell Universitys College of Veterinary Medicine, cancer afflicts about 30 to 40 percent of cats, and one-third or so of these are mammary gland cancers. Its an especially wicked disease, he notes, since approximately 85 percent of mammary gland tumors are malignant, forming beneath a nipple and eventually spreading to the lymph nodes, lungs, liver, kidney or other parts of the body. These malignancies most often occur in female cats older than 10 years of age.

Mammary gland cancer is particularly pernicious, says Dr. Page, since a tumor in the feline breast can pose a lethal threat even at its site of origin. The tumor begins in the mammary gland, he explains, and grows beneath the nipple. One of its features is that this growth begins to cause of lot of stretching of skin at the top of the mass. In time, this can result in an ulceration on the skin that breaks through the surface, bleeds and becomes prone to serious infection.

Mysterious Origins
The cause of feline mammary gland cancer is unknown. Genetics, says Dr. Page, has not yet been found to play a role. Although some veterinary oncologists contend that Siamese cats are at greater risk than other breeds, he considers the evidence for that notion as scientifically unconvincing. Likewise, while causal links between carcinogens, viruses, vaccines and even lifestyle have been established in relation to various other forms of feline cancer, these factors do not appear relevant to the onset of breast cancer in cats.

On the other hand, in Dr. Pages opinion, the hormone status of a female cat is very important. The roles played by the two female reproductive hormones- estrogen (which promotes the heat cycle) and progesterone (which prepares the uterus for pregnancy) – appear to indirectly influence the risk of feline mammary cancer by promoting the development of the breast tissue that facilitates the lactation process and enables the nursing of newborn kittens. (Dr. Page notes that 95 percent or more of mammary gland cancers occur in female cats.) While, in his view, it is unlikely that these hormones themselves can trigger malignant cell growth, their influence on the development of breast tissue in the young cat is of significant consequence.

It has to do with the change in cats as they go through puberty, says Dr. Page. Similar to humans and most other mammals, the feline breast tissue is stimulated at puberty to develop as the levels of estrogen and progesterone increase. If, through spaying, we prevent these changes from occurring, then there is no risk of breast tissue development and, consequently, little chance of breast cancer.

Indeed, he says, You can prevent mammary cancer in cats by neutering them prior to their first estrus (heat cycle). Spaying may also be effective if its done within the first two or three heat cycles. But after that, there is really no change in a cats risk for breast cancer. It is the early hormonal status of the animal that is most important in determining her lifetime risk for breast cancer. The risk goes from very low to very high.

Course of Treatment
Any detectable lump – even one as small as a BB – warrants medical attention from a veterinarian, says Dr. Page. There may be no behavioral signs, he observes, but it should be evaluated due to the high incidence of mammary cancer. It could turn out to be a different kind of malignancy that is expressing itself in that part of your cats body. But given that mammary cancer is generally more lethal than other malignancies, youve got to have it looked at.

According to Dr. Page, removal of affected tissue and its associated lymph nodes is very important if the suspicion of a malignant tumor is confirmed. Many veterinarians will do a very aggressive surgical procedure that will include the entire mammary chain, he says, and cats handle that very well. In my judgment, it depends on the location and size of the tumor. If the mass is very small, it may require less than a radical mastectomy. If there is a clear risk for more tumors to develop, taking both chains is not a bad idea.

Hormone therapy, Dr. Page notes, is not useful. Radiation therapy can be effective, but the anatomy of the cat and the location of the malignancy may make it very difficult to irradiate successfully. Chemotherapy may be appropriate, but only following surgical treatment. As for after-the-fact ovariohysterectomy (spaying), Dr. Page says, It may prevent other problems in the uterus that are hormonally driven, but the actual benefit in terms of breast cancer is unknown.

A Mixed Outlook
For a cat that has undergone a mastectomy (excision of one or both mammary gland chains), recovery from surgery will generally require minimal home care. Cats are very resilient, says Dr. Page, and theres no reason to think there will be a problem. You want to keep the animal indoors and apply warm compresses to the incision to help the healing. Depending on how much tissue has been removed, the cat will be feeling some discomfort for a week or 10 days.

Long-term survival, too, depends on the size of the original tumor and whether it has invaded the lymph nodes. Studies have shown that cats with tumors less than an inch in diameter are apt to survive for three years or more following surgery.

But, says Dr. Page, a cat with a relatively large tumor that has spread to the lymph nodes is not likely to survive more than six or nine months.