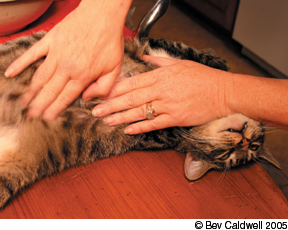 If you happen to be present during your female cats annual physical examination, youll notice that the veterinarian will pay special attention to the animals underside, gently stroking, probing and palpating the flesh and closely looking at the animals nipples and adjacent areas. Among the things that the veterinarian is searching for are any signs of mammary gland cancer, one of the most common and deadliest of feline diseases.

According to Rodney L. Page, DVM, director of the Comparative Cancer Program at Cornell Universitys College of Veterinary Medicine, cancer in general afflicts about 30 to 40 percent of cats, and one-third or so of these cases are mammary gland cancers.

Uncontrolled Growth
Most frequently occurring in cats older than 10 years of age – and in female cats 95 percent of the time – mammary cancer is an especially threatening disease, he notes. Approximately 85 percent of mammary gland tumors are malignant, forming beneath a nipple and eventually spreading (metastasizing) to the lymph nodes, lungs, pleura, liver, adrenal gland, kidney or other parts of the body.

But a breast tumor doesnt have to be malignant in order to imperil a cats life. It can pose a lethal threat even at its site of origin. The tumor begins in the mammary gland, Dr. Page explains, and grows beneath the nipple. One of its features is that this growth begins to cause a lot of stretching of skin at the top of the mass. In time, this can result in an ulceration on the skin that breaks through the surface, bleeds and becomes prone to serious infection.

In the early stages of development, the tumor is likely to be painless to the cat and imperceptible to the owner. The animal will appear to be in fine health. For this reason, owners should learn how to examine their cats periodically – as often as once a month – for signs of suspicious growths in the nipple area and to make sure that the animal receives a thorough physical check-up at least once a year.

Searching for Causes
The basic cause or causes of feline mammary gland cancer are unknown, says Dr. Page. Genetic influence, he points out, has not yet been found to play a role. Although some veterinary oncologists contend that Siamese cats are at greater risk than other breeds, he considers the evidence for that notion to be scientifically unconvincing.

Likewise, while links between external cancer-causing agents (carcinogens), viruses, vaccines and even lifestyle have been established in relation to various other forms of feline cancer, these factors do not appear relevant to the onset of breast cancer in cats.

On the other hand, in Dr. Pages opinion, the hormone status of a female cat is very important. The roles played by the two female reproductive hormones – estrogen (which promotes the heat cycle) and progesterone (which prepares the uterus for pregnancy) – appear to indirectly influence the risk of  feline mammary cancer by promoting the development of the breast tissue that facilitates the lactation process and enables the nursing of newborn kittens.

While, in his view, it is unlikely that these hormones themselves can trigger malignant cell growth, their influence on the development of breast tissue in the young cat is of significant consequence. It has to do with the change in cats as they go through puberty, says Dr. Page. Similar to that in humans and most other mammals, the feline breast tissue is stimulated at puberty to develop as the levels of estrogen and progesterone increase.

If, through spaying, we prevent these changes from occurring, there is no risk of breast tissue development and, consequently, little chance of breast cancer.

Indeed, he says, You can prevent mammary cancer in cats by neutering them prior to their first estrus (heat cycle). Spaying may also be effective if its done within the first two or three heat cycles. But after that, there is really no change in a cats risk for breast cancer. It is the early hormonal status of the animal that is most important in determining her lifetime risk for breast cancer. The risk goes from very low to very high.

Veterinary Intervention
Any detectable lump – even one as small as a BB – warrants veterinary attention, says Dr. Page. The growth should be evaluated, he advises, due to the high incidence of mammary cancer. It could turn out to be a different kind of malignancy that is expressing itself in that part of your cats body. But given that mammary cancer is generally more lethal than other malignancies, youve got to have it looked at.

According to Dr. Page, removal of affected tissue and associated lymph nodes is very important if the suspicion of a malignant tumor is confirmed. Many veterinarians will do a very aggressive surgical procedure that will include the entire mammary chain, he says, and cats handle that very well. In my judgment, it depends on the location and size of the tumor. If the mass is very small, it may require less than a radical mastectomy. If there is a clear risk for more tumors to develop, taking both chains is not a bad idea.

Hormone therapy, Dr. Page notes, is not useful. Radiation therapy can be effective, but the anatomy of the cat and the location of the malignancy may make it very difficult to irradiate successfully. Chemotherapy may be appropriate, but only following surgical treatment.

As for after-the-fact ovariohysterectomy – spaying – Dr. Page says, It may prevent other problems in the uterus that are hormonally driven, but the actual benefit in terms of breast cancer is unknown.

Survival Prospects
For a cat that has undergone a mastectomy (excision of one or both mammary gland chains), recovery from surgery will generally require minimal home care. Cats are very resilient, says Dr. Page, and theres no reason to think there will be a problem. You want to keep the animal indoors and apply warm compresses to the incision to help the healing. Depending on how much tissue has been removed, the cat will be feeling some discomfort for a week to 10 days.

Long-term survival, too, depends on the size of the original tumor and whether it has invaded the lymph nodes. Studies have shown that cats with tumors less than an inch in diameter are apt to survive for three years or more following surgery. But, says Dr. Page, a cat with a relatively large tumor that has spread to the lymph nodes is not likely to survive more than six or nine months.

An owner can play a valuable role in recognizing the presence of mammary cancer at an early stage – when it is most treatable – by performing a monthly physical exam. Says Dr. Page: A veterinarian can show you what to look for – how to check the mammary glands, the lymph nodes and so forth. Picking up on any abnormalities early is really the best way to control this disease and keep it from getting to a point at which the veterinarian cannot be of much help.

Furthermore, Dr. Page advises owners to obtain a blank map of the feline body from a veterinarian. The notations that you periodically make on this chart will help in monitoring the progress of various bumps that emerge on your cats body over time.

Most of them will be benign, says Dr. Page. But by keeping up on these abnormalities and measuring them, youll be better able to discuss those that are most troublesome with your veterinarian.

Even with such vigilant care, of course, a cat may develop mammary cancer, which may progress rapidly. In addition to the formation of obvious masses or lumps of tissue, an owner should be concerned about signs of bruising or bleeding around the nipple area, any respiratory difficulties, such as coughing or labored breathing, a noticeable decline in appetite and lethargy.