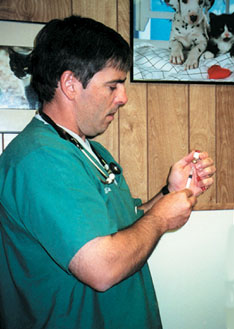 Should your cat be vaccinated? When? With which vaccines? And how frequently should it receive booster shots? A decade ago, says Dr. James Richards, DVM, Editor-in-Chief of CatWatch and director of the Cornell Feline Health Center, the answers to those questions were conveniently clear. In the mid-1990s, he recalls, the vaccination treatment plan, or protocol, was simply based on what I call the three Es – every cat should be inoculated with every available vaccine every year.

A dramatic increase in the number of available vaccines. A decade ago, says Dr. Richards, we had only four or five vaccines for cats. Today, there are no fewer than ten vaccines that are generally effective in providing a degree of immunity against a variety of feline diseases.

Although the vaccine safety and efficacy record is very good overall, he notes, it has now become clear that vaccines sometimes cause clinical disease. It is remotely possible for vaccines to damage developing fetuses or stimulate allergic reactions. An improperly placed injection can cause nerve injury. Vaccines and equipment, if poorly maintained or stored, can become contaminated with infectious agents. And of growing concern is the development of injection-site sarcomas – certain cancers that, for unknown reasons, develop at the point on a cats body where a vaccine has been injected.

Shifting opinions regarding the frequency with which booster shots are needed. Research has brought into question the need for cats to be routinely revaccinated on an annual basis. Laboratory testing can determine whether the antibody level in a cats blood remains high enough as a result of previous vaccination to indicate protection against certain specific viruses. If so, the animal would theoretically be protected against disease associated with the virus in question, and a booster shot would be unnecessary. By skipping a booster shot, the cat would be spared the potential health risks that accompany vaccination, and its owner would be spared the needless expense of the procedure.

Vaccination should be regarded as a complex medical procedure and should therefore be undertaken with correspondingly serious consideration.

Vaccine protocols should be determined for cats on a case-by-case basis.
Accordingly, the simplistic every cat, every vaccine, every year approach was summarily abandoned. Currently in its place, says Dr. Richards, is the following set of objectives: (1) vaccinate the largest possible number of animals in the population at risk for a specific disease; (2) vaccinate only against infectious agents to which a cat has a realistic risk of exposure and of subsequent disease; and (3) vaccinate each animal only as frequently as necessary.

The bottom line, says Dr. Richards, is this: We realized that we didnt need to vaccinate with everything that was in the refrigerator – we only wanted to use the vaccines that a particular cat could benefit from. And we realized that we should vaccinate only as often as necessary – and that not all of the available vaccines needed to be given every year.

Core Vaccines: Necessary for All Cats
All vaccines that the AAFP currently recommends have, through stringent testing, proven to be largely effective in protecting cats against serious infections. Four of the 10 available vaccines are referred to as core vaccines. Regarded as necessary for all cats, they offer protection against the diseases caused by the following viruses:

Feline panleukopenia virus (FPV) – the cause of a potentially lethal, highly contagious disease, also known as feline distemper, that is marked by fever, vomiting, diarrhea and brain damage;

Rabies virus – which attacks the central nervous system and causes an inevitably fatal disease; rabies is also contagious to humans and other mammals.

For FPV, FHV and FCV, the AAFP recommends that all kittens be initially vaccinated at approximately six weeks of age and receive booster vaccines every three to four weeks after that until they are over 12 weeks old. (This is called the kitten series.) Another revaccination should be administered one year after the initial series, and booster shots should be given no oftener than every three years thereafter.

For rabies, an initial vaccination is to be administered when a kitten is about 12 weeks of age, with a booster shot one year later and additional booster shots yearly or every three years thereafter, depending on the vaccine type. Because rabies can be transmitted from an infected animal to a human, rabies vaccinations are required by law in most U.S. locales.

Non-Core Vaccines: On a Case-by-Case Basis
The remaining six available vaccines are categorized as non-core. Their use should be determined on a case-by-case basis depending on a number of variable factors, such as an individual cats age, overall health, lifestyle, and environment. The six non-core vaccines are those that protect against:

Feline leukemia virus (FeLV) – which is known to directly or indirectly cause several gravely serious feline diseases, such as lymphosarcoma, a cancer of the lymph nodes;

Feline infectious peritonitis (FIP) – a lethal viral disease that may initially affect the respiratory or gastrointestinal system before progressing to other areas of the body;

Giardia – a protozoan parasite that causes an intestinal disease;

Bordetella – an organism that infects the respiratory system and may precipitate serious lung conditions.

Determining which cats should be immunized against the non-core diseases, at what age and how often continues to be the subject of debate. As Dr. Richards points out, sound decisions depend in this regard on such factors as a cats age, lifestyle, environment, risk of exposure and the likelihood that infection will lead to serious disease.

Is There An Alternative?
When bacteria or viruses enter a cats system – either through natural infection or vaccination – the animal develops antibodies, protein substances that work to destroy or weaken the invading organisms. (The concentration of antibodies that are present in an animals blood is called a titer; the process of determining the antibody level is called titration.) Theoretically, a high antibody titer should indicate that a cats immunity to a virus has been maintained since its previous vaccination and that a booster shot is therefore unnecessary. Some in the veterinary community strongly suggest that these blood tests should be used more often, since they might prevent an animal from having to undergo a needless procedure.

Dr. Richards adds one caution, however: Measuring antibody levels as a way to determine whether revaccination is necessary certainly has its appeal, but its not foolproof and wont work for all vaccines. Antibody has been shown to be predictive for FPV, FHV and FCV only, but not for any of the other infectious agents.

In addition, he notes that titration results can differ markedly among laboratories. So, he advises, a veterinarian who chooses to measure antibody in lieu of vaccinating should make sure to use a laboratory that has validated its tests.

Based on what we know now, says Dr. Richards, I would go along with the idea of vaccinating every three years with the core vaccines and determining whether to use – and how often to use – the non-core vaccinations according to an individual cats age, health status, risk of exposure and so forth. I feel strongly that cat owners should follow the AAFP recommendations.