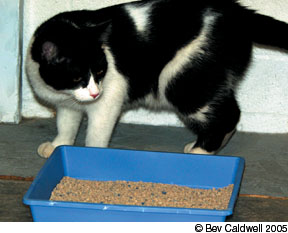 A parasite is an organism, either simple or complex in structure, that inhabits and finds its nourishment inside another creature, contributing nothing to its hosts well-being and often robbing the animal of valuable nutrients. Cats commonly serve as hosts for these rude and voracious interlopers, often experiencing severe health disorders in return for their hospitality.

To compound the problem, many parasites can transmit zoonotic diseases – illnesses that are passed between animals and humans, often through contact with an animals feces.

Among the most troublesome of parasites when it comes to threatening the health, and potentially the lives, of cats (and their owners as well) are those that inhabit the feline gastrointestinal tract –  the stomach and intestines.

Two protozoan parasites are especially common among cats in American households, says James Richards, DVM, director of Cornell Universitys Feline Health Center. One, he points out, is Giardia lamblia, which is found in an animals small intestine. Many animals infected with this parasite never become ill. Some, however, may develop giardiasis, a disease marked by bouts of watery diarrhea and, in kittens, failure to gain weight.

Humans may contract giardiasis, too, but it is unclear whether cats serve as a source of human infection. Nonetheless, owners are advised to wash their hands carefully after touching a cat with diarrhea (or its litter box).

But the biggie when it comes to intestinal protozoan parasites, says Dr. Richards, is Toxoplasma gondii, an organism responsible for a disease called toxoplasmosis. Cats infected with Toxoplasma gondii shed the parasite in their feces for up to several weeks after infection. Many infected cats do not become ill, but when they do, the consequences can be dire, such as fever, pneumonia, eye disease, liver disease or seizures. If untreated, the disease is likely to be fatal to a cat.

But toxoplasmosis is of greatest concern, Dr. Richards says, not so much because of the severe illness that it can cause in cats, but because of the damage it can cause to a human fetus if a pregnant woman becomes infected with it. It also poses a serious threat to people with compromised immune systems, such as those with AIDS.

Complex Organisms
Dwarfing the one-celled parasites in size if not in number is an assortment of unsavory and pernicious critters called helminths, more commonly referred to as worms, that pose as much as – or more – of a threat than the protozoa.

These multi-celled organisms come in three categories: nematodes, which have cylindrical, unsegmented bodies, generally narrowed at each end; cestodes, which have long, flat, segmented bodies with a mouthlike structure at one end that allows them to attach themselves to an animals intestinal tissue; and trematodes, thick worms that have suckers that they use for attaching to a host.

According to Dr. Richards, the three helminths that are by far most frequently observed as feline intestinal parasites are roundworms, hookworms and tapeworms.

Roundworms are a type of nematode that Dr. Richards describes as spaghetti-like organisms that can grow to a length of four or five inches in a cats gut.  They live in the small intestine, where female worms produce eggs that are passed in the hosts stool. Other cats become infected through inadvertent ingestion of the parasites eggs or by eating other infected animals. Adult cats that are infected with roundworms usually do not suffer harmful consequences. But vomiting, diarrhea, listlessness and a pot-bellied appearance are common in kittens, who are often infected by their mothers.

Hookworms are another kind of nematode that lives in the small intestine. As with roundworms, the female hookworms produce eggs that are carried out into the environment with a cats feces. Cats can become infected either by ingesting the parasites eggs or by eating animals that are infected with them. They can also be infected by hookworm larvae that hatch from the eggs and penetrate a cats skin.
Adult hookworms, says Dr. Richards, latch onto the tissue lining a cats intestinal tract and feed on the animals blood. In severe cases, especially in kittens, loss of blood can lead to life-threatening anemia.

Tapeworms, a type of cestode, are so called due to their large, long, ribbon-like appearance. Although they, like hookworms, have a device that enables them to grab onto tissue, neither adults nor larvae have digestive systems. Instead, tapeworms absorb nutrients from their surroundings through the surfaces of their bodies. Cats become infected by eating rodents or fleas, both of which are major carriers of this cestode.

Tapeworms arent nearly as harmful to cats as roundworms and hookworms, says Dr. Richards, but if a cat has a very heavy infection, it can experience vomiting or diarrhea. Owners are likely to spot the presence of tapeworms by noticing small, white packets of eggs that are sloughed off by the worm and tend to be plainly visible in an animals stool or around its anus.

Signs of Infection
The primary clinical signs of gastrointestinal infection for roundworms, hookworms or tapeworms are similar, says Dr. Richards. Although there are stages in their life cycles when they may be burrowing around and affecting other organs, he notes, the things you usually notice are vomiting, diarrhea and weight loss. And with tapeworms, you may see a cat scooting around on its rump, because these mobile little packets of eggs that theyre passing in their stool can cause itching around the anus. In addition, a kitten that is infected with roundworms or hookworms may be scrawny and yet have a noticeable pot belly.

On the other hand, he says, a cat may be infected and passing eggs into the environment, but not have clinical signs at all.

In cases of suspected roundworm or hookworm infection, a veterinarian will do a fecal examination. The veterinarian takes a stool sample, Dr. Richards explains, and mixes it into a liquid that causes any eggs that are present to rise to the top. A microscopic study of these eggs will then identify the culprit.

It is usually impossible to detect tapeworms this way, however, because the egg packets that they shed dont rise in the liquid, he continues. The way we usually discover tapeworm infection is when an owner calls and says, Hey, what are these little white things crawling all over my cats behind?

Available Medications
Medications are available that are effective in ridding cats of roundworms, hookworms and tapeworms. According to Dr. Richards, the medications are safe and, in his opinion, should be used when a kitten is very young – as early as three weeks of age. Some of these substances will get rid of both roundworms and hookworms, he says, but tapeworms require their own separate medication.

I would like to see all veterinarians routinely conduct yearly fecal examinations and, when appropriate, use these medications, he says. This would be good for the animal and also for humans. We dont want these parasites out in the environment where people can come in contact with them and get sick.

Zoonotic Risk
In 2003, a committee of the American Association of Feline Practitioners (AAFP) developed an exhaustive set of guidelines addressing the many infectious diseases that can be transmitted from cats to humans.

More than two dozen serious illnesses were identified, about half of them associated with gastrointestinal worms and protozoa. The guidelines described the organism responsible for each disease, the signs of infection in cats and humans, and the relative risk of zoonotic transmission.

Although the guidelines were developed primarily for use by veterinarians and contain nearly 50 suggestions pertaining to veterinary management of feline zoonotic diseases, the document should be of interest and great value to cat owners as well.

Titled Feline Zoonoses Guidelines from the American Association of Feline Practitioners, the entire document can be accessed on the Internet at www.aafponline.org/ (click on Resources, click on Practice Guidelines, click on Zoonosis Guidelines).