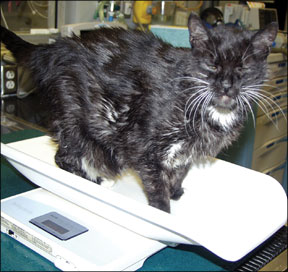 Your 17-year-old cat, once a fastidious creature, has been ignoring her litter box for the past several months, defecating and sometimes urinating wherever she pleases throughout the house. She spends most of the day either fast asleep or, if awake, staring blankly at a wall. And at night she wanders about the house in the dark, wailing pathetically. Considering that she seems to be in

good physical health, youre apt to wonder whether the cat, at the age of 17 (the equivalent of 85 years or so in a human) might be losing her mind.

You could be right. Various studies have shown that as many as 80 percent of cats over the age of 16 show signs of age-related dementia, often referred to as senility or – as animal behaviorist Katherine Houpt, VMD, PhD, prefers to call it – cognitive dysfunction. “Senility is a rather disparaging term, and dementia implies a kind of aggressive behavior that you might see in extremely unstable humans but never in cats,” says Dr. Houpt, the James Law Professor of Animal Behavior and director of the animal behavior clinic at Cornell Universitys College of Veterinary Medicine.

The physical changes in the makeup of a cats brain that result in mental impairment and bizarre behavioral patterns are not well understood, but progress is being made. In one study of cats over the age of 16, post-mortem examination revealed the same type of tangled fibers (beta amyloid plaques) that are seen in the brains of humans with Alzheimers disease. Another post-mortem study revealed that the brains of cognitively impaired cats contain a certain protein that is also present in the brain cells of humans with Alzheimers.

All feline breeds are susceptible to age-related cognitive dysfunction syndrome, Dr. Houpt says, although the condition is more frequently observed in domestic shorthaired cats than in pedigreed cats for the simple reason that shorthaired cats tend to live longer.

The salient indications that a cat is experiencing this condition include spatial disorientation; wandering in unfamiliar territory; diminished playfulness; excessive sleeping; shifting cycles of sleep and wakefulness; long periods of staring into space or at walls; indifference to food and water; sudden, prolonged and seemingly unprompted vocalization; and elimination outside the litter box.

According to Dr. Houpt, the most dramatic and most frequently reported behavioral indication of feline mental decline is an elderly cats persistent vocalization during the night. “They howl constantly between midnight and dawn,” she says. “Thats the behavior that owners complain most about and the one that most frequently leads to a cats being euthanized. People wouldnt mind if the animal was just active during the night. Cats are light on their feet, and you cant hear them pacing. But the constant yowling keeps owners awake.”

Another behavioral indication that may signal age-related mental decline is a change in an animals socializing patterns. “They tend to withdraw from other cats,” says Dr. Houpt. “On the other hand, an old cat will usually become more affectionate, more willing to lie purring in its owners lap for extended periods.”

Despite the prevalence of cognitive dysfunction in the older cat population, owners of an elderly cat that begins to behave oddly should not assume that it is becoming mentally impaired. For example, Dr. Houpt points out: “An undiagnosed cancer that the cat has harbored for a long time may make a cat defecate in the house or become less active. And hyperthyroidism, which can be very easily treated, can make a cat hypervocalize, or meow a lot.”

Other age-related conditions whose signs may resemble those of mental deterioration include arthritis, which can cause a cat to slow down noticeably as it ages; advanced kidney and urinary tract disease, which may severely alter an animals litter box behavior; and progressive hearing problems, which may make a cat decreasingly responsive to its environment.

Certain measures might help prevent or delay the onset of cognitive dysfunction, says Dr. Houpt, while others will ease the discomfort of an already affected cat. For example, she suggests that cats 15 years of age and older be fed a diet rich in vitamin E and antioxidants, substances that are known to retard the effects of aging.

Dr. Houpt also advises owners to try to reduce the stress in an aging cats daily life. “Dont bring another cat or a dog into the household,” she says. “This can be very stressful during the later period of an animals life.”

If the aging cat has trouble going up stairs or jumping onto a bed, she suggests helping the animal by providing a ramp. Make sure that its litter box is readily accessible and that the animal can get in and out of it easily.