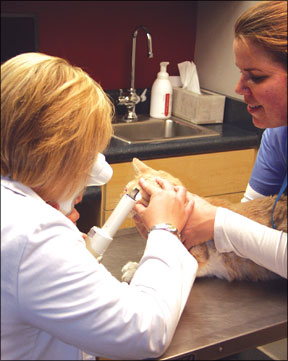 Owing to several unique features developed over centuries in the wild, the modern cat typically possesses powerful visual acuity that enables it to function effectively both indoors and beyond the confines of its home. Unfortunately, the feline ocular apparatus is vulnerable to injuries and a wide variety of diseases that can dramatically impair a cats eyesight or, worst case, render it partially or totally blind

“We see cats that are either blind or going blind several times a week,” says Thomas Kern, DVM, associate professor of ophthalmology at Cornell Universitys College of Veterinary

Medicine. “Most of these animals have eye disease as a primary disorder – they have no other health problems. And most of them are middle-aged or elderly cats whose vision loss has been progressing for years.”

As is true for virtually all threats to feline health, the earlier a cats vision problem is diagnosed, the more effectively it can be treated – unless, of course, the animals blindness has progressed irreversibly by the time it is noticed. Therefore, Dr. Kern urges owners to keep an eye out for any behavioral or physical indications that a cat is having a vision problem and to report any such signs to a veterinarian without delay.

While structurally similar in most respects to human eyes, feline eyes have acquired over thousands of years a number of distinctive features that improve its chances for survival as both predator and prey. Among these features is a third eyelid – or “haw” – a thin, pale membrane positioned at the inner corner of the eye, between the lower eyelid and the eyeball. This extra eyelid helps keep the surface of a cats eyeball moist, protects it from being scratched by erratically growing hairs, and can help shield it during a scrap with a rival cat or other animal.

Cats also have a specialized layer of tissue beneath the retina that reflects incoming light. This structure – the tapetum lucidum – reflects light not absorbed by the retina during its first passage through the eye, thus giving the light a second chance to be absorbed and transmitted to the brain. Thanks to the tapetum lucidum, a cats sensitivity to light is thought to be about six times greater than that of a humans.

Cats are subject to a host of diseases that can cause permanent damage to any or all of the eyes components. These disorders include cataracts, in which the lens gradually clouds up – often impenetrably – and prevents light from entering the eye; glaucoma, a condition marked by excessive fluid pressure within the eyeball that can cause it to harden; progressive retinal atrophy, in which the retinal tissue degenerates and loses its ability to function properly; and a variety of tumors – either malignant or benign – that develop within the eye or adjacent to it.

The most frequently diagnosed feline eye disorder, Dr. Kern notes, is conjunctivitis, an inflammation of the conjunctiva – the mucous membrane that lines the inner surface of the eyelid and the outer surface of the eyeball. This highly contagious condition, usually a byproduct of an upper respiratory disease caused by either a bacterial or viral organism, is often observed in densely populated cat shelters, he notes. The disorders clearest symptom is runny eyes, and it is readily curable if treated promptly.

Among the diseases that frequently lead to feline blindness, Dr. Kern says, the most common is inflammation of the uvea (uveitis), the middle area of the eye that is made up of the iris, the ciliary body (which produces the fluid inside the eye), and the choroid (which supplies nutrients to the retina). This disease, which is most often associated with FIV, FeLV, FIP and other infectious organisms, is usually chronic and is likely to result in gradual blindness. Among its signs are inflammation of the eyeball, squinting, swollen third eyelids and noticeably enlarged eyes.

The second most common blindness-causing disorder in cats, he says, is retinal detachment, a condition in which the retina becomes separated from its underlying tissue, typically resulting from a leakage or oversupply of fluid between the two layers. Retinal detachment is most frequently associated with high blood pressure, an overly active thyroid gland, or kidney disease. In some instances, prompt and proper veterinary treatment can restore partial vision to a cat with a retinal detachment, but in most cases, permanent blindness will result.

Cats eyes are also vulnerable to traumatic and potentially blinding injuries, notes Dr. Kern, such as corneal lacerations (cuts on the outer surface of the eye), which are common. As is the case with virtually all types of feline health problems, the earlier a cats vision impairment is diagnosed – whether the result of disease or injury – the better it may be treated. In some cases, unfortunately, an animals failing vision or blindness may have become irreversible by the time veterinary care is pursued.