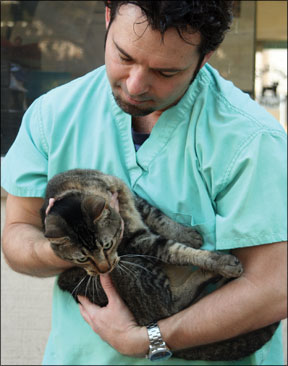 All cats, no matter how pampered and vigilantly cared for they may be, are prone to serious injury or the sudden onset of life-threatening clinical signs of deeply rooted and perhaps previously unrecognized illness. And, without a doubt, the actions that an

owner takes immediately after a cat has had an accident or is in obvious physical distress might save its life.

It makes sense, therefore, that responsible cat owners should have a basic understanding of how to respond in case an emergency arises. But more important, says James Richards, DVM, director of Cornell Universitys Feline Health Center and editor-in-chief of CatWatch, is that owners know what not to do in such a situation, since inappropriate treatment can make a bad situation worse and can conceivably kill, rather than help, an ill or injured cat.

He recommends that owners have a properly outfitted and readily accessible feline first aid kit in their homes. But the most important contents of that kit may not be the scissors, gauze pads, rolls of tape, and so forth that it contains. At least as important are the day and after-hours telephone numbers of the family veterinarian, and the number of the poison control center sponsored by the American Society for the Prevention of Cruelty to Animals (ASPCA), which is 888-426-4435.

“In real-life situations,” says Dr. Richards, “the actions that most often make a difference are: first, getting the kitty to the veterinary clinic as soon as possible and second, transporting the animal in a manner that reduces the likelihood of the cats illness or injury being made even worse. Its important to know about bandaging and all but, in my opinion, whats more important by far is not wasting time before the cat is examined and treated by a veterinarian.”

While by no means disparaging the value of a handy first aid kit, Dr. Richards notes: “In most cases, spending time at home trying to help a cat in distress is counterproductive if its done at the sacrifice of getting the cat to a veterinarian. It could take you 15 minutes or more to put a bandage on the animals leg. I would rather have those 15 minutes spent on a car ride to the clinic.”

Knowing how to handle an injured cat is important, not only for the animals sake but also for the owners safety. In the ASPCA Complete Guide to Cats, a book authored by Dr. Richards, he writes: “When an emergency occurs, reason does not always prevail. Panic, fear and confusion can hinder your ability to think clearly and act appropriately, so it is very important to have an emergency plan. If your cat has suffered a traumatic injury if hes been struck by a car or mauled by a dog, for instance the first priority is to protect yourself. A cat that is hurt and frightened can seriously injure a person who is simply trying to help.”

In that case, should a thick pair of gloves be included among the contents of a feline first aid kit? Not really, says Dr. Richards. “A cat in pain, even one who loves you dearly, is apt to bite when handled. If you have gloves thick enough that the cat cant put its sharp little teeth through welding gloves, for instance they will be so bulky that you wont be able to do anything with the animal.”

In his book, Dr. Richards advises: “Approach the injured cat slowly, while speaking to her in a calm voice. Before attempting to touch the cat, cover her head with a thick blanket or heavy towel to protect yourself from being bitten. Gently lift the cat and place her, without force, into a box or carrier with the top open. If you suspect the cat has suffered spinal injuries … support the cats head while lifting, and be careful not to twist the neck or spine.”

“Its also important for owners to know how to reposition an injured animal,” says Dr. Richards. He recommends the following: “If you need to restrain the cat in order to perform a procedure, such as applying a bandage or putting pressure on a bleeding wound, grasp the skin at the back of the neck and lay the cat on her side with her feet facing away from you; lay the arm that is grasping the neck alongside the cats back. Restrain the hindquarters by placing your other hand between the rear legs, being careful not to get scratched. If you need the cat to be on her left side, grasp the neck skin with your left hand; if you need her on her right side, grasp the neck with your right hand.”

The techniques for handling and moving an injured cat are “tricky,” says Dr. Richards, and owners should become adept at them. Ask your veterinarian for lessons, he suggests, and practice them on your cat prior to the occurrence of a true emergency.

Owners should also learn how to stop the bleeding from a cats wound (apply direct pressure over the bleeding area, using sterile gauze pads); what to do if a cat has a seizure (move away all objects that might injure the animal); and what to do if a cat experiences heatstroke (pour cool water on the animal and apply a cool, wet rag). While these subjects and many others are covered in his book, Dr. Richards notes that there is an abundance of other sources on feline first aid available in print, including his favorite: Help! The Quick Guide to First Aid for Your Cat by Michelle Bamberger, DVM.

Well-intentioned owners must be aware not only of what they should do in case of an emergency, but also of what they should not do. Dr. Richards cautions, for example: “Never give a cat a human medication without first checking with your veterinarian. Never try to reset a broken limb. Never induce vomiting unless a veterinarian advises you to do so. Never apply an ointment or other substance to a burned area. Never strike a cat on its back to dislodge an object from its throat.”

Above all, he stresses: “Dont waste precious time trying to treat your sick or injured cat. Move the animal carefully into its carrier without delay, and get it to your veterinarian immediately.” v