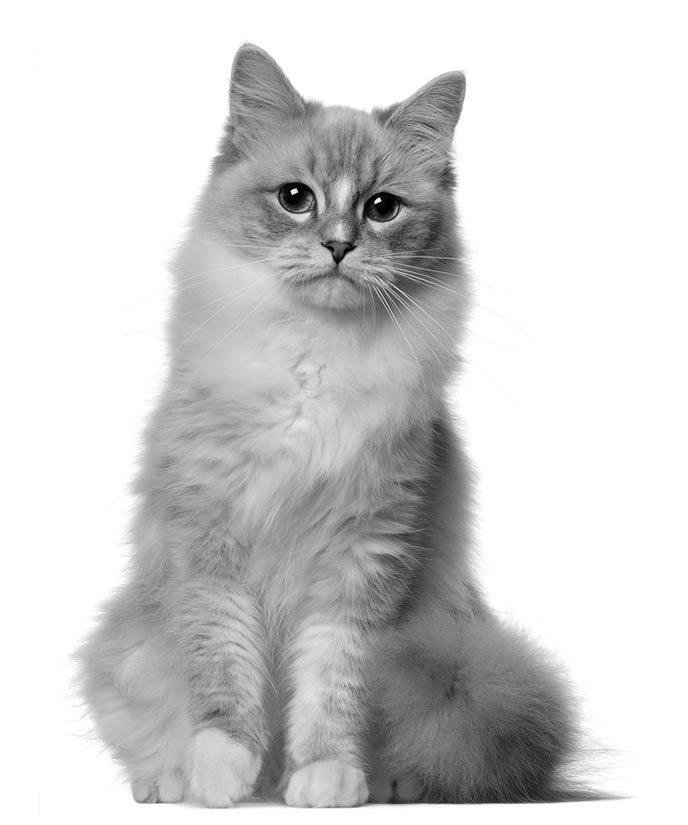 One minute your cat seems fine. The next he’s passed out on the floor. What should you do? Fainting, or clinically speaking, syncope, is the temporary loss of consciousness followed by a spontaneous rapid recovery.

“Rather than an illness in itself, fainting is a symptom of illness caused by a lack of sufficient flow of oxygenated blood to the brain,” says cardiologist Bruce Kornreich, DVM, Ph.D., ACVIM, Associate Director of the Feline Health Center at Cornell. His advice during an episode: “Carefully monitor your cat, never put your hand in his mouth, and contact a veterinarian immediately.”

Syncope (SING-kuh-pee) can occur in cats of any breed and age, although it is a rare symptom of disease in them. Be aware, however, that certain breeds, such as Maine Coons and Ragdolls, are more prone to hypertrophic cardiomyopathy (HCM), a heart disease which may cause fainting or, more commonly, symptoms that can resemble fainting. HCM is the most common heart disease in cats.

Blocked Blood Flow. “Cats with HCM tend to have problems with blood clot formation and may experience blockage of blood flow to different parts of the body, most commonly the hind limbs,” Dr. Kornreich says. “Cats who experience such blockage often demonstrate acute paralysis of the hind limbs, which may cause them to stumble, fall or drag their hind limbs. This syndrome may be confused with fainting. Cats with HCM may also be more prone to cardiac arrhythmias.”

In general, cats with cardiac or central nervous system diseases — both more common in older pets — are more likely to experience syncope. Among other causes:

– Cardiomyopathy (HCM) and other diseases of the heart muscle, resulting in insufficient pressure to pump blood to the brain.

– Neurologic problems such as epileptic seizures.

– A drop in blood pressure due to certain heart medications, such as beta blockers, ACE inhibitors and calcium channel blockers, which are also used to treat a variety of other conditions.

– A malfunction of the parasympathetic nervous system (a branch of the autonomic nervous system), causing a drop in blood pressure, heart rate and blood flow to the brain. Excitement, stress and pain can be triggers.

If your cat has a fainting spell of any sort, make a note of the time, its length, any precipitating event and other symptoms. If possible, take a video of the episode.

Because the underlying condition may be chronic, progressive or even life threatening, diagnosis is essential, Dr. Kornreich says. “Your cat’s veterinarian will review your cat’s health history and perform a thorough physical examination. Baseline blood work, including an evaluation of serum biochemistry and glucose levels, will also often be recommended.”

Low blood glucose (hypoglycemia) may be a cause of fainting, particularly in kittens. If brain disease is suspected, your veterinarian might recommend a CAT scan or MRI imaging to evaluate the brain structure. A sample of cerebrospinal fluid (the fluid that bathes the brain and spinal cord) may also be obtained to rule out inflammation and/or infection in the central nervous system. Because arrhythmias may be a cause of fainting, the veterinarian may recommend a device called a Holter monitor that your cat wears at home to obtain a 24-hour electrocardiogram. This monitor checks the heart’s electrical function.

“Veterinary researchers are currently looking into what causes both seizures and arrhythmias, and the best means to treat them,” says Dr. Kornreich. “Inappropriately rapid heart rates can be treated with drugs, while inappropriately slow heart rates — although uncommon in cats — can be corrected with pacemakers. Central nervous system disease and idiopathic [of unknown cause] epilepsy often can be controlled with one or several anti-seizure medications. If a tumor is detected, surgery to remove it may help, depending upon its location.”

Alternative Medications. If the side effects of medication are responsible for the fainting episodes, your cat’s veterinarian may stop those them and prescribe alternatives. While the prognosis for fainting because of heart disease is often guarded, the prognosis for other cats may be more favorable.

Fainting in cats is usually not the result of owner negligence, but you can take steps to avoid it, Dr. Kornreich says. “Schedule regular wellness checks with your cat’s veterinarian, and closely monitor drugs that could cause blood pressure to drop.”

To avoid stressing your cat’s heart, restrict his activity and keep him as quiet as possible until you and his veterinarian determine the cause, Dr. Kornreich says. “And even if your cat has fainted only one time — and even though it might never happen again — he should be checked out by a veterinarian.”