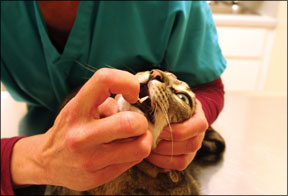 Thanks to medical science in general and veterinary health research in particular, a vast array of medicines are available today to treat virtually any acute or chronic feline physical disorder. Many

Since its not unlikely that you will be called upon now and then to play doctor for your cat, youd do well to learn the most effective ways in which to give your animal the medicines it needs.

Medications can now be routinely administered to cats at home for such conditions as bacterial infections, hyperthyroidism, diabetes, eye and ear disorders, and many others. And these drugs are available in several forms, including tablets, capsules, liquids, skin ointments, injectable fluids, digestible pastes and dermal patches. Although each mode of drug delivery has its own specific techniques, some general guidelines apply to all methods of medicating a cat, according to Christine Bellezza, DVM, a consultant in the Feline Health Center at Cornell Universitys College of Veterinary Medicine.

First, she says, you must make sure that the animal is receiving its medications in the full dosage prescribed by your veterinarian and that the medications are administered precisely according to the time schedule that has been established. When giving the medication, she advises, “You want to administer with as little trauma as possible. You dont want to create an adversarial relationship with your cat so that it runs and hides whenever it sees you.

Although youll have to restrain the animal while youre giving the medicine, do so as gently as possible, and speak to it in a calm, reassuring tone of voice. You might also want to give the animal a favorite treat a small piece of chicken, for instance to help it associate the process with something pleasant.”

Many medications are now available in both pill and liquid form, she points out, and an owner may have greater success with one than with the other. “Some cats will raise a big fuss with a pill but will readily swallow a liquid,” says Dr. Bellezza, “while others are just the opposite.”

No matter which type of drug is being administered, your cat will have to be restrained to an extent, some cats more securely than others. The goal is to place the cat in a position either on a table or on the floor that is as comfortable and relaxing as possible (for both of you) but will also facilitate the task at hand. “It sometimes helps to have two people taking part,” Dr. Bellezza says, “one person to restrain the cat and the other to administer the medication.”

For an especially resistant cat, she advises, it may be helpful to wrap the animal tightly in a soft towel, with only its head exposed. This will also keep you from being scratched during the procedure, she notes. Some owners may want to further protect themselves from injury by wearing gloves. In all cases, she adds, “Try to minimize the length of time that your hands are in the cats mouth.”

If you are administering the medication by yourself, it may be preferable to place the cat with its hindquarters facing into a corner so that it cant back away from you. Or you might opt to kneel down over the cat, with your legs on either side of the animal. If you have assistance, your partner can hold your cat from behind, gently but firmly grasping its shoulders with each hand and cradling the animal along both sides. Keep in mind that the entire procedure should be carried out with the least amount of restraint and anxiety-causing hubbub as possible.

Your role in administering medication to your cat will most frequently involve the safe and effective delivery of drugs in the form of pills or liquids those that are administered orally and those in the form of eye and ear drops. Following are some tips on getting the job done efficiently. (You can view video demonstrations of the procedures produced by Cornells Feline Health Center online at www.felinevideos.vet.cornell.edu.)

Pills (tablets or capsules): Place one hand on top of your cats head. Extend the thumb of the other hand down to one corner of its mouth and the fingers to the other corner. Tilt the cats head back until its nose is pointing upward, place the pill between the thumb and forefinger of your other hand and, while gently lifting the cats head, open its mouth with the middle finger of the hand that is holding the pill. As the cats mouth opens, place the pill at the center of its tongue, as far back as possible. Then close the cats mouth and, while holding it shut, rub its throat gently, which will ensure that it swallows the pill.

To facilitate the cats swallowing, says Dr. Bellezza, “It really helps to coat the pill lightly in butter before putting it in the animals mouth.” To make sure that the pill or capsule doesnt get caught in the esophagus, always follow up with a little food or administer some water into your cats mouth through a syringe; your veterinarian can supply you with one.

Liquids: The challenge in this case, she notes, is to prevent your cat from drooling or spitting the medication out of its mouth. To accomplish this, hold your cats head with one hand as previously described, and direct the tip of the dropper or syringe containing the medication into the cats mouth, preferably in the space between the cheek and gums. Slowly discharge the medicine, withdraw the syringe, and hold the animals mouth closed until youre confident that the medication has been completely swallowed.
Eye drops: Place one hand on the cats chin, lift its head and gently pull down on the lower eyelid with your thumb (“to form a pocket,” says Dr. Bellezza). Hold the droplet container between the thumb and forefinger of your other hand and squeeze the drops onto the surface of the animals eye, preferably the white of the eye.
Ear drops: Place your thumb and forefinger on either side of the cats ear flap and lift it up so that you can see into the ear canal. Squeeze the drops into the ear opening, making sure that the medicine goes down into the canal. Then gently massage the base of the ear to distribute the medicine. “In administering ear drops and eye drops,” Dr. Bellezza cautions, “be very sure to hold the cats head still so that it is not scratched by the stiff nozzle of the applicator.”

In many cases, the medications that a cat requires, the scheduling of their administration and the techniques required are comparatively complex and call for special skill and practice. A diabetic cat, for example, is likely to require daily injections of insulin. And in some instances, postoperative pain or pain associated with a chronic illness may call for the use of a dermal drug patch that is applied directly to select areas of an animals skin.

Most owners are capable of administering injections and properly applying dermal patches but only after they receive thorough, detailed instruction by a veterinarian.