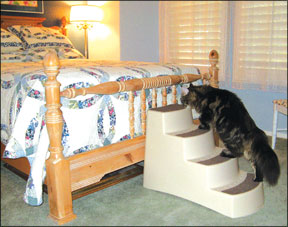 At the age of 12, your cat seems to be slowing down a bit, and that could be perfectly normal. After all, a cat of her age – equivalent to the age of 65 or so in a human – has been living a full life and deserves to take it easy on herself. Nevertheless, its a good idea to have the animal checked out by your veterinarian. Its quite possible that her diminished activity is a consequence

not of her advancing age but of a debilitating pain in one or more of her joints.

Slowed-down, reclusive behavior is an indication of a joint problem in cats of any age, says Christine Bellezza, DVM, a consultant at the Cornell University’s College of Veterinary Medicines Feline Health Center. “Some of the signs are very subtle,” she points out. “An affected cat may seem lethargic and may increasingly seek out comforting places to nap – in a warm corner of your home, for example, or in a spot of sunshine near a window.” The reclusive behavior can also be attributed to a deeply ingrained feline instinct for self-protection. A cat may want to conceal its disability for fear of alerting a potential predator to its vulnerability.

Other indications that a cat is suffering pain in one or more of its joints may not be so subtle. “The cat may have trouble hopping in and out of its litter box,” says Dr. Bellezza, “and it may avoid going up and down stairs.” It is also possible for a cat with a severe joint problem to become constipated because it cant position itself properly to defecate. Furthermore, due to joint pain, an affected cat may be unable to groom itself thoroughly.

The most frequently diagnosed feline joint disorder, according to Dr. Bellezza, is osteoarthritis, otherwise known as degenerative joint disease (DJD). This condition may be caused by an injury to a joint, by gradual wear and tear on a joint that takes place over time, or as the secondary consequence of a disease that compromises the internal structure of a joint.

In all cases, DJD is characterized by the erosion of cartilage, the smooth tissue that protects the ends of bones from rubbing directly against one another within a movable joint. When this protective tissue, for whatever reason, is worn or torn away completely, the bone ends come immediately into contact, and the persistent grinding of bone against bone results in inflammation and pain of varying severity.

All joints in a cats body can be affected by DJD, but those that become most visibly apparent to the owner will be the movable joints, most often the shoulders and elbows. But the knees, wrists and hips are also frequently affected. Outward signs of the condition will vary, depending on which joints are most painful, the extent of damage, and the animals age.

The earliest visible sign of DJD is likely to be apparent stiffness and a subtle reduction in an affected animals activity. Altered gait may eventually occur as the disease progresses or if the joint disorder has resulted from an injury.

There is no gender predisposition for DJD; male and female cats are equally susceptible to the condition. It is seen more frequently in obese cats than in those of normal weight, since overweight animals constantly exert excessive pressure on their weight-bearing joints. The only notable breed disposition for DJD is in Maine Coons who, due to their naturally stocky bodies, are more susceptible to hip dysplasia than other breeds.

The most prevalent contributing factor for DJD is age. In one study, researchers carefully analyzed X-rays of the spines and limbs of 100 middle-aged or elderly cats (10 years of age or older). The study found that very few of the animals had perfectly normal joints and that most of them had obvious radiographic signs of arthritis. Indeed, the X-rays revealed that 90 percent of cats over the age of 12 showed evidence of DJD. Young cats, however, are by no means invulnerable. The findings of another study suggested that 20 percent of all cats one year of age and older are already arthritic to some extent.

Although DJD is, by far, the most frequently observed feline joint disorder, a wide variety of other conditions affecting the joints may be responsible for a cats sudden or gradually occurring lameness. For example, being hit by an automobile or falling from a significant height can fracture or dislocate one or more bones in an animals joints. Most frequently, says Dr. Bellezza, these traumas occur in the front or hind limbs, although such fractures can also occur in a cats pelvis or spine.

In some cases, a cat may be born with a so-called developmental defect – a genetically inherited condition – that affects the joints. Among these conditions, the most frequently occurring is hip dysplasia. In a normally formed animal, the top end of the thigh bone fits snugly into the ball-and-socket joint of the hip but is free enough to glide and partially rotate to allow an animals movement. In a cat with hip dysplasia, the ball and socket are misaligned and loose, a structural abnormality that causes the bones in the joint to rub painfully against each other.

A host of other problems can compromise the joints in the feline body, such as dietary and hormonal disorders, bone cancer, diabetes, rheumatoid arthritis and ligament ruptures. Fortunately, these conditions, insofar as they impact the joints, are relatively rare in cats, especially when compared with the frequent occurrence of DJD.

Veterinary diagnosis of a cat that seems to be experiencing a joint problem focuses, therefore, on confirming the presence of DJD and excluding, to the extent possible, the presence of other conditions that might affect the joints. According to Dr. Bellezza, diagnosis will entail a complete medical history and overall physical examination of an afflicted animal, followed by an orthopedic exam and X-rays of the cats joints.

A number of surgical procedures, such as bone fusion or joint replacement, may relieve a cats problems, but such procedures can also restrict an animals activities. So palliative treatment – relying largely on pain medication and attentive home care – is most often recommended. The goal is to relieve the patients discomfort and provide him or her with a reasonably good quality of life.