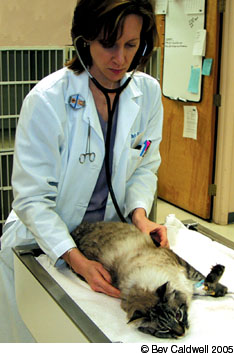 Simply because your cat cant write poetry or sing a song, dont for a moment assume that the little creature is neurologically compromised. Indeed, a cats brain and the other parts of its nervous system are about as complex and, in most vital matters, as capable as yours. Its just that a cat uses this complex network of electrochemical circuitry to meet needs and desires that are different from yours – stalking mice or wrestling with a feline roommate, for example.

Unfortunately, this awesome arrangement of specialized tissues is vulnerable to a wide variety of serious, sometimes deadly disorders.

System Components
The feline nervous system is made up of two components: the central nervous system, consisting of the brain and spinal cord; and the peripheral nervous system, which comprises the cranial, spinal and other nerves. In a healthy animal, the entire arrangement works harmoniously to enable and control vital processes within a cats body and to allow the animal to manipulate and respond to its environment.

In simple terms, these functions are facilitated by the instantaneous transmission of signals, largely from the peripheral nervous system, which extends to tissues throughout the entire body and then to the spinal cord and the brain. The brain responds by interpreting these signals and immediately transmitting appropriate instructions back through the brain stem and spinal cord to the appropriate destination via peripheral nerves.

Many functions of the nervous system are under conscious and voluntary control, such as the movement of an animals leg or the opening and closing of its mouth. Other functions are involuntary and regulated by the autonomic nervous system, such as the action of muscles in the digestive tract, the lungs and the heart and the secretion of hormones.

Central Processing
The hub of all of this activity is the brain – the central processing unit – which coordinates these activities. The brain consists of the cerebrum and cerebellum, which govern different nervous system activities, and the brain stem, which connects the brain to the spinal cord. Covering the brain and spinal cord are three layers of protective tissue called the meninges.

According to Alexander de Lahunta, DVM, a professor of clinical sciences at Cornell Universitys College of Veterinary Medicine, the feline brain is typically three to 3.5 centimeters in diameter – about the size of a ping pong ball. This tiny but power-packed organ, along with the other delicate components of a cats central and peripheral nervous systems, is subject to disease and injury, and all signs of neurologic distress must receive prompt veterinary attention.

Most Common Disorders
Compared to diseases in other organs, neurologic disorders are rare in cats, occurring in less than one percent of the feline population. Among the disorders, says Dr. de Lahunta, some occur with notable frequency compared to others.

A condition called meningioma, he says, is the most common of all. At the Cornell University Hospital for Animals, he notes, We might see one case of meningioma per month.

This disease is a tumor of the meninges, the brains protective tissue. Although these growths are usually benign and well defined, their continued expansion will eventually result in damage caused by pressure on the brain.

Meningioma is most common in older cats, says Dr. de Lahunta, and it is treatable only by surgical removal of the tumor – if it is accessible. If such delicate surgery is successful, he says, cats will do quite well afterward.

Very common as well, he points out, is trauma to the brain resulting from head injuries sustained when a cat is hit by an automobile. Indeed, an estimated 40 percent of feline head injuries occur in such accidents.

Brain trauma also results frequently from head injuries caused by owners. For instance, says Dr. de Lahunta, the cat is sleeping on the back porch, and the owner goes out in the morning and steps on its head. And the results can be devastating, since a cats skull bones arent very thick, and the brain can get very badly injured.

Congenital disorders:  The most common of these, says Dr. de Lahunta, is a condition affecting the cerebellum, the part of the brain responsible for muscle coordination. Some kittens are born infected with the feline distemper virus and immediately show remarkable lack of coordination. There is no cure, he notes, but cats with this neurologic problem can live a long life and, in his words, can make wonderful pets.

Infectious diseases:  According to Dr. de Lahunta, bacterial and fungal infections in the middle or inner ear frequently migrate to the brain, often with severe neurologic implications. Other infectious diseases find alternate paths to the brain. Feline infectious peritonitis, for example, is a virus-caused inflammation that may affect the brain and produce many clinical signs, depending on which area of the organ is affected. Other brain-threatening infectious diseases include rabies, toxoplasmosis (a protozoal disease), feline immunodeficiency virus (FIV) infection, and a condition called cryptococcosis, which is caused by a yeast.

Parasitic diseases: Cuterebriasis, a disorder most commonly affecting kittens and young cats during the summer months, is caused by the larva of a fly (cuterebra) that work its way into an animals system and may invade its cranial cavity, which houses the brain. Dr. de Lahunta cites cuterebriasis, which may lead to the sudden deprivation of blood supply to the brain, as the most common neurologic disease caused by a parasite.

Nutritional disorders:  There was a time, says Dr. de Lahunta, when cats frequently suffered poor coordination and seizures due to a lack of a certain nutrient, thiamine, in their food. Nowadays, however, commercial cat food manufacturers provide adequate amounts of thiamine in their products, and this nervous system condition is rarely observed.

Degenerative diseases:  Notable among these is an inherited enzyme deficiency that leads to the destruction of nervous system cells. Kittens are born with the deficiency, says Dr. de Lahunta, and the disease progresses over weeks or months to the point at which the animal dies or must be euthanized. Also in this category are neurologic problems stemming from hypertension, to which cats are susceptible. High blood pressure, which can cause blood vessel damage in the brain, is most frequently seen in older cats.

Miscellaneous:  Most common in this category, says Dr. de Lahunta, is idiopathic epilepsy,  seizures that occur frequently despite the lack of tumors, infection, or any other known cause of brain damage. Cats with this problem are perfectly normal in every other respect, he notes, adding that the condition is much more common in dogs than in cats.

Signs of Trouble
Indications of feline neurologic problems may, of course, vary depending on the cause. In general, however, Dr. de Lahunta advises owners as follows: Look for any abrupt changes in your cats behavior – if, for example, it stops using its litter box, circles around constantly, sits in a corner staring off into space or changes its interactions with people. As a neurologic condition progresses, the animals gait and balance are likely to change noticeably. It may tilt its head to one side, and it may frequently stumble and fall.

Diagnosis will entail several steps. Says Dr. de Lahunta: Well first examine the animal anatomically to determine what part of the nervous system is abnormal. Based on that, well decide which of the various disorders could be causing the clinical signs. Imaging methods – either CT scans or MRI – will help us in doing that.

A variety of treatment options, including medication, surgery and radiation, are available, depending on the diagnosis. The prognosis is often very good, says Dr. de Lahunta. He notes, however, that treatment for a neurologic disorder can be quite expensive and that owners frequently opt to euthanize an affected animal, especially if its quality of life is likely to be poor following treatment.