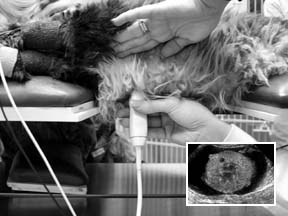 Ultrasonography (or more simply, ultrasound) is an imaging technology that uses sound waves to visually study deeply seated, hard-to-reach areas of the body. Developed in the late 1940s as a tool for examining the internal organs of humans, the technology rapidly gained enthusiastic acceptance among physicians as a uniquely valuable diagnostic aid. Today, one-fourth of all human imaging procedures worldwide employ some form of ultrasound technology.

In the late 1970s and early 1980s, ultrasound gradually made its way into the world of veterinary medicine. And in the past decade, its use has become a routine, if not essential, service offered in private veterinary clinics and large teaching hospitals focusing on small-animal medicine.

A Case Study: Ronnies Kidney Problem
What does ultrasound bring to veterinary medicine that other widely used radiological methods – X-rays, for example – do not? To illustrate, just look at what it did for Ronnie, a 17-year-old domestic shorthair. About a year ago, Ronnie had been showing signs that he was experiencing some kind of kidney problem – increased thirst and urine production, decreased appetite, weight loss and apparent back pain. Most alarmingly, his abdomen appeared to be grossly swollen.

His owners brought Ronnie to the Cornell University Hospital for Animals (CUHA) in Ithaca, NY, where he was given a thorough physical examination. Palpation confirmed that the abdominal distention was centered in the area of the cats left kidney. Overall, the examination strongly suggested that Ronnie might be suffering from renomegaly – a kidney enlargement that can cause serious systemic trouble for a cat of any age, but has an especially grim prognosis for a senior citizen such as Ronnie. The diagnosis seemed to be supported by X-rays showing a large, amorphous shape that appeared to be a swollen kidney – but just to make sure, the attending veterinarian had Ronnie undergo an ultrasound exam.

The resulting ultrasound images confuted the original diagnosis. We saw that the kidney wasnt swollen at all, says Peter Scrivani, DVM, a lecturer in radiology at the hospital. In fact, it was actually very small, but surrounded by fluid. The X-ray image had been unable to show where the outer surface of the kidney stopped and the fluid around it began. The ultrasound image clearly distinguished the light-gray kidney from the black appearing stuff surrounding it – the fluid.

As a result of the clarifying ultrasound image, says Dr. Scrivani, Ronnies fluid retention was successfully treated and he was released from the hospital. At last report, the elderly cats abdominal swelling had receded, and Ronnie was looking forward to an even longer and happier life.

How Ultrasound Works
A typical ultrasound scanning device is made up of three main components – a probe (transducer); a central processing unit (CPU); and a display monitor. First, the CPU transmits electrical energy to the probe. Next, the probe emits high-frequency sound waves – well beyond the range of hearing. These ultrasonic waves are directed at the target organ and receive the waves that rebound from it. The reflected waves are transmitted back to the CPU as data in the form of electrical current, and the CPU instantaneously assembles this information to create a visual image – or sonogram – that appears on the display monitor. The image can also be transferred to film for later viewing.

The probe – since it is responsible for emitting and receiving the ultrasonic waves – is the core of the ultrasound configuration. Probes are available in many different shapes and sizes, depending on their specific uses. Some, for example, are long and slender. They are used for viewing the inside of the vagina, rectum and other body cavities. Other probes are contoured to accommodate the scanning of interior structures such as the liver, kidney and uterus. At CUHA, says staff radiologist Amy Yeager, DVM, the most commonly-used probe resembles a fat pencil. Since the probe has a wedge-shaped sensing mechanism at its tip, the images it yields are triangular in shape.

Shades of Gray
To the untrained eye, an ultrasound image is likely to be nothing more than a mottled field of blacks, whites and shades of gray. To experienced radiologists such as Drs. Scrivani and Yeager, however, the image can provide a wealth of information about the liver, heart, kidneys and other vital organs. A form of ultrasound – echocardiography – is commonly used to view the structure of an animals heart.

Whereas X-rays are used to study bones and other solid structures, Dr. Yeager explains, ultrasound is very good for looking at soft tissues. By studying the various shades of gray, I can tell, for example, that there are lumps on an animals liver. I wont be able to tell you what kind of lumps they are – whether they are cancerous growths or abscesses – but I can tell you for sure that they exist and should be further evaluated. With X-rays, you can only see the external contour of a soft-tissue organ, its size and shape. Ultrasound gives you a look at an organs internal structure.

Dangerous soft-tissue disorders that ultrasound can detect include gall bladder and kidney stones; enlarged lymph nodes; abnormal blood vessels; pancreatitis; uterine infections; and many other conditions. The technology also is widely used to confirm pregnancy and to measure the heartbeat of a fetus.

The Procedure
At CUHA, says Dr. Yeager, ultrasound exams are scheduled every half-hour throughout the day – clear evidence of its acceptance as a diagnostic tool. Since ultrasound cant penetrate gas in the stomach or bowels, she says, its preferable that an animal has nothing to eat for 12 hours before the procedure, although it can have as much water as it wants.

Once in the examining room, says Dr. Yeager, the animal is placed on a table and the hair on its belly is clipped short. Its smooth abdomen is then coated with a slippery gel, which enables the sonographer to glide the probe smoothly across the animals skin and make full contact with the area under examination. Occasionally, a skittish animal will be mildly tranquilized, after which the lights in the examining room are dimmed and the ultrasound exam gets underway. However, says Dr. Yeager, sedation is unnecessary in most cases.

For a brief period – rarely longer than 20 or 30 minutes – the probe is run across the target area. While the sonographer studies the visual images on the monitor, assistants talk soothingly to the animal to keep it as still and comfortable as possible, although it doesnt have to remain motionless in order for the procedure to succeed.

Getting Results
In some cases, she says, the results of an ultrasound examination are revealed immediately. In others, conclusive findings may have to await the results of additional diagnostic procedures, such as X-rays or blood tests. A delay in getting results may also occur if the exam is conducted by a technician, in which case the diagnosis would have to await a veterinarians review of the ultrasound images. In that case, the owner may have to wait 24 hours or so to get the results.

The cost of an ultrasound examination will usually range between $100 and $250, says Dr. Yeager, depending on several factors, such as a veterinary practices overhead, the quality of the equipment that it uses (expensive versus very expensive), and the training and expertise of the sonographer.