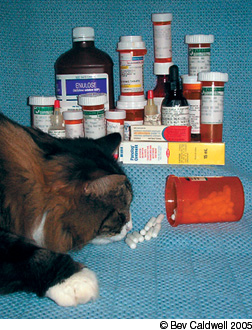 As the result of injury or illness, a cat (just like you and me) can experience pain of varying intensity in its hard and soft tissues – its bones, joints, ligaments, muscles and internal organs. But unlike us, a cat cant express its discomfort by verbalizing. It cant say Ouch! and point to where it hurts. Then how do we know when a cat is in pain? The answer, says Sheilah Robertson, DVM, is that we cant know – unfortunately, we can only assume.

There have been lots of studies done to measure objective indicators of feline pain, such as heart rate, blood pressure, the presence of certain stress hormones in the blood, and so forth, says Dr. Robertson, a professor in the Section of Anesthesia and Pain Management at the University of Floridas College of Veterinary Medicine. But none of them has proven to be very reliable. So what we have to do is understand a particular cats normal behavior, and if something has happened to it that changes that behavior, we have to make the assumption that the cat is hurting. We have to assume that anything that would hurt us would hurt a cat.

A Protective Mechanism
Unpleasant as it is, pain plays a crucially important role in maintaining a cats health and well-being by alerting the brain that something, somewhere in an animals body has gone awry and needs fixing. This protective mechanism is enabled by sensitive receptor cells located throughout the body – in the skin, the bones, joint surfaces, artery walls – just about everywhere.

These specialized cells, stimulated by harmful forces or substances (pressure on a limb or internal organ, extreme heat or cold, the consumption of a poisonous substance or inflammation in a joint, for example), transmit impulses along nerves to the spinal cord and then to the cats brain. And thats when the alarm bell sounds and the hurting begins.

Sources of Pain
Like human pain, feline pain can be acute – the kind of intense but comparatively short-term discomfort that may be caused, for example, by a bone fracture or burned skin; or it can be chronic, persisting constantly or intermittently for an extended period – even a lifetime – beyond the expected time of healing.

According to Dr. Robertson, feline pain can be classified as visceral (originating in the chest or abdomen);  neuropathic (stemming from damage to the nerves or spinal cord); or musculoskeletal (associated with trauma or disease in the bones, joints or their supporting tissues).  As examples, she cites pain accompanying a bladder infection as visceral; pain resulting from a limb amputation that entails the severing of nearby nerves as neuropathic; and pain resulting from a severely strained ligament as musculoskeletal.

Among the most common causes of feline pain, Dr. Robertson notes, is any type of elective surgery. Although spaying, neutering and declawing are done routinely, she says, there is going to be significant pain. Joint disease – specifically osteoarthritis – is another frequent source of persistent pain, she adds. Its very underrated as a cause of pain, says Dr. Robertson. Theres evidence suggesting that 90 percent of all cats over age 12 have some kind of osteoarthritis, but because we dont take our cats for walks and notice them slowing down, a lot of this chronic pain goes unnoticed.

As for the most common sources of acute pain, she identifies broken bones, abscesses, and a variety of traumatic injuries that cats typically suffer in car accidents and fights with other animals.

The behavioral changes that may indicate that a cat is in pain include, for instance, hiding, restlessness, intolerance of being held or touched, altered movement or reluctance to move, decreased appetite and heavy breathing. However, Dr. Robertson points out, the signs are apt to be inconsistent. One of the most confusing and debatable signs is purring, she says. But nobody really knows what a cats vocalization means. Cats purr when theyre happy and content, but theyll also purr when theyre in pain or distress.

Drug Development
Veterinary drug developers have been trying for a long time to create substances designed to relieve acute and chronic pain in cats. Progress has been impeded, says Dr. Robertson, for several reasons – for example, the mistaken and perpetuated belief that opioids (narcotic drugs that dull the senses) tend to drive cats crazy, a reaction formerly referred to as morphine madness.

But studies now show that this is just not true, says Dr. Robertson, when you use clinical doses whose safety and efficacy have been scientifically established. Another reason for delay in developing pain-killing (analgesic) medications for cats has been, until recently, the cost involved in drug development. It hasnt been economical, she observes, for a drug company to do all of the trials required to get feline pain-management substances approved by the FDA. But thats changing. Several companies realize that household cats now outnumber dogs. There are now some 77 million household cats in the U.S. – about 10 million more than there are dogs. And there are probably just as many homeless cats.  Thus, says Dr. Robertson, drug companies are understandably showing greater interest these days in creating pain-relieving medications for that growing consumership.

Common Pain Killers
Currently, feline pain is treated primarily with two types of analgesics: opioids, which function as numbing agents that dull pain; and nonsteroidal anti-inflammatory drugs (NSAIDs), which relieve inflammation. Which type of pain killer is appropriate depends largely on the source of the pain, the intensity of a cats discomfort and the length of time that is prudent and desirable for an animal to be under a given analgesics influence.

Opioids, Dr. Robertson explains, may be used during surgery or to ease the experience of acute pain. These drugs bind to specific pain receptors, and once that happens, the cats perception of pain is changed. That is to say, the animal is in a state where it doesnt appreciate pain.  The NSAIDs work by reducing pain-producing heat and swelling in joints and their surrounding tissues.

Long-Term Benefits
Aside from preventing or alleviating pain, the use of analgesics is of significant long-term value to a cats health. If you dont treat acute pain, says Dr. Robertson, a cat can become a chronic-pain patient. In a spaying procedure, for example, you will be stimulating a lot of nerve endings if you cut them without using a pain killer. This can affect the whole spinal cord and the brain, and so the entire cat will be altered, never to return to normal again.

And if you have a severely injured cat and you dont treat its pain, its chances of survival are greatly reduced. If it does survive, its period of convalescence will be greatly prolonged. Its beyond a doubt that pain drugs improve the outcomes of any type of therapy.