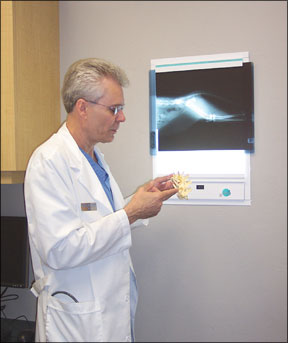 Although animals were used in the early 20th century to test the diagnostic potency of X-rays, the first-generation radiologists involved in those experiments could hardly have imagined a time when most veterinary clinics would be equipped with X-ray machinery and radiology would be a mainstay in the diagnosis of many feline physical disorders.

It is difficult to pinpoint the time when X-rays came into widespread use among veterinarians, says Peter Scrivani, DVM. However, he points out, the American College of Veterinary Radiology was founded in 1961. “And thats about the time

that the use of the technology by veterinarians really started to take off,” says Dr. Scrivani, an assistant professor and director of veterinary diagnostic imaging at Cornell Universitys College of Veterinary Medicine.

X-rays, otherwise known as radiographs, are an especially effective medium for viewing bone tissue – studying fractures, for instance, and monitoring their healing. The technology is also useful in diagnosing such skeletal disorders as osteoarthritis, hip dysplasia and bone tumors. At the same time, Dr. Scrivani notes, X-rays are good for viewing certain soft tissues, especially those in the thorax, the portion of a cats anatomy between its neck and abdominal area that contains its heart and lungs.

How does a radiographic procedure work? Dr. Scrivani explains the process as follows: “We direct an X-ray beam through the patients body, focusing on the area that we want to examine. The rays pass through the body and onto a film. Different tissues absorb varying amounts of the rays. If a tissue absorbs a large amount of X-rays, fewer rays will reach the film, and that part of the resulting image will be white or a shade of gray. If no rays are absorbed, that part of the film will be black.”

Since bones absorb most rays, he says, they will appear white on a radiograph, while soft tissues, which do not absorb the rays, will be dark gray or black. Radiographs are especially useful for examining the lungs, Dr. Scrivani points out, because those organs are normally filled with air that allows the X-rays to pass through to the film. “If theres a disease in the lungs,” he says, “it will replace the air, and well be able to see that.”

X-ray technology has progressed dramatically during the past several years. Most notably, Dr. Scrivani points out, the procedure has become increasingly computerized, with the images presented on a video screen rather than on film. Instead of having to wait for film to be developed, he says, “We snap the radiograph, and the image appears instantaneously on the monitor.”

Except for viewing organs in the thoracic area – mainly the heart and lungs – an alternative imaging method, ultrasound, offers superior benefits when it comes to viewing other soft tissues and organs in a cats body, such as the kidneys, liver and bladder. The reason for this, says Dr. Scrivani, is that X-rays do not reveal differences between these tissues and their associated fluids, such as blood and urine, while ultrasound is capable of doing that.

In ultrasonic imaging, high-frequency sound waves, well beyond the range of hearing, are directed at a specific area of a cats anatomy. When the sound waves bounce back from the target area, they are transmitted to a central processing unit that instantaneously assembles this information to create a visual image – a sonogram – that appears on a display monitor.

In addition to distinguishing solid tissues and fluids, a sonogram will also show the interior structure of an organ. Also, a sonographic procedure is done in real time and thus produces a moving image. Consequently, ultrasound can reveal the ongoing activity of an organ as it is functioning – a beating heart, for example.

Other popular imaging techniques include computerized tomography (CT) scanning and magnetic resonance imaging (MRI), which yield cross-sectional images of the interior of a cats organs, including the brain. These modalities are widely used to diagnose or rule out, for example, sinus or ear disease and neurologic disorders, such as brain tumors and meningitis.

Despite the effectiveness of these alternative techniques and the limitations of radiography, X-rays remain the imaging method most widely used by veterinarians. “For one thing,” Dr. Scrivani explains, “the other techniques require that the patient remain still for a long time, so general anesthesia will be necessary. But X-rays take a very short time, so we can often get a good picture of a cats bones or thoracic area without having to anesthetize the animal.”

To summarize, Dr. Scrivani says: X-rays are most commonly used by veterinarians for diagnosing orthopedic disorders and for viewing the thorax; ultrasound is more commonly used to examine the abdominal area; CT scanning is used for nasal and ear diseases; and MRI is used for nasal and neurologic disorders. However, he adds, “On rare occasions – an emergency, for example, in which a cat may have to undergo surgery – we might do an abdominal radiograph because its so quick and easy.”

When is an X-ray warranted? “It depends on the clinical signs,” says Dr. Scrivani. “Certainly, well do an X-ray to diagnose any kind of lameness, and well want to have a lung X-rayed if the patient is coughing or having difficulty breathing.”

In addition to diagnosing a condition, radiographs are also frequently used to exclude causes of a disorder and to confirm a tentative diagnosis arrived at by other means, such as a physical examination, blood test or urinalysis.

The duration of the X-ray procedure depends to an extent on its purpose. “Routinely,” says Dr. Scrivani, “we take two views. The exposure itself takes only a fraction of a second. But to give us time to review the image and make sure that we have the correct views and dont have to repeat the process, we usually schedule a 30-minute exam. That takes care of everything, from start to finish.”

Whether a cat must be sedated for the procedure depends on the disorder thats being investigated and also on a specific animals personality. Says Dr. Scrivani: “Most cats will do fine – theyll just sit there and let us do whatever we need to do. Often, however, well strap them down with sandbags and tape that constrain them and hold them in place while we take the X-rays.”

Excessive exposure to X-rays is known to be potentially harmful to normal tissues, but cat owners need not be concerned with that, says Dr. Scrivani. “Veterinarians take a lot of precautions,” he points out. “Were actually more concerned about protecting the technicians who perform several X-rays every day.”

Most veterinarians are qualified to interpret X-ray images, he says, in comparatively straightforward cases, such as a fractured limb, or in determining whether the source of a cats breathing problems might be related to heart disease or pneumonia. In more complicated cases, the veterinarian may send the images to radiographic specialists for interpretation. “There are places,” he says, “that do only that – they specialize in reading X-rays. Even a veterinarian who is confident about interpreting an X-ray may send the images to a specialist for assurance and confirmation that the tentative diagnosis is correct.”

The cost involved in a feline X-ray procedure will depend largely on the complexity of the patients clinical signs and the number of views that a veterinarian needs in order to make a diagnosis. In general, an owner can expect to be charged between $175 and $200 for a routine (two-view) examination.