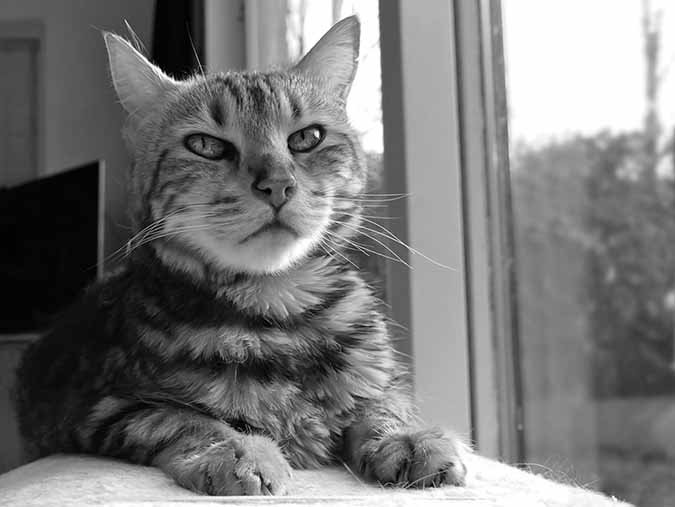 Owners are increasingly aware of the risks of their cats being overweight, and at the veterinary clinic may view those poster silhouettes of feline body conditions — under, over and ideal weight — with a wary eye.

But who knew that assessing muscular condition should be an integral part of regular wellness visits? That’s among the recommendations in a report on healthy feline aging in a special issue of the international Journal of Feline Medicine and Surgery from SAGE Publishing.

About 20 percent of the estimated 80 million cats in the U.S. are believed to be 11 years of age or older, with many expected to live into their 20s. Given the size of the population, it’s disheartening to learn that, “There is a paucity of research in feline aging,” according to the journal report.

It’s now generally accepted that feline healthy aging is achievable just as it is in humans where the field of aging is dedicated to optimizing mental, social and physical well-being and function in older adults, the report says. “What has been less well defined, however, is what healthy aging actually looks like in a cat; in other words, what changes would be considered ‘normal for age’ … as opposed to deteriorative changes.”

A panel of experts reviewed information on common changes observed in cats, including the musculoskeletal system and cognitive and behavioral health. The panel included Sharon A. Center, DVM, ACVIM, Professor of Internal Medicine at Cornell.

The experts also developed new resources, such as complete blood count intervals as a baseline for mature to geriatric cats. While the 20-page report is intended primarily for veterinarians, many owners will find valuable information, especially about behavior changes related to certain illnesses.

For example, while we may think that thirst and frequent urination are the hallmarks of diabetes, the report lists behaviors also related to metabolic disorders like diabetes mellitus. Among them: anxiety, irritability, aggression, altered sleep, house soiling and mental dullness.

A feline cognitive chart rates telling changes, such as exhibiting clingy and irritable behaviors at the same time, or playing less with toys and other animals. (See “Is it Dementia or Normal Aging?” in the May 2016 issue of CatWatch.)

About that advice on muscular condition: “Healthy cats move fluidly, with grace and ease,” the report says. “Older healthy cats may move less quickly but still move fluidly.” A detectable loss of muscle mass, by visualization and palpation, may indicate degenerative or other systemic disease, such as a digestive problem, insulin-mediated changes, renal disease, a dietary deficiency or hyperparathyroidism, a disorder resulting in high levels of the parathyroid hormone, which regulates calcium and phosphorus circulating in the blood.