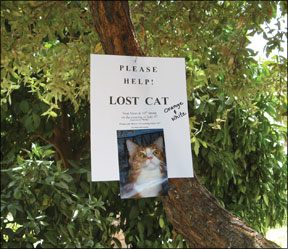 For some reason, this scientific report made us think of the “whoosh!” sound when a can of coffee is opened: “Use of vacuum-assisted closure for management of a large skin wound in a cat” (

Journal of the American Veterinary Medical Association Vol. 230, No. 11).

The relatively new technique – pioneered in human surgery cases and tested recently by veterinary surgeons on a nine-month-old cat that was struck by a car – calls for wrapping the wounded area in sterile plastic foam. Then a vacuum pump sucks out the air between the skin and the foam blanket so that the animal, essentially, was shrink-wrapped. The treatment pulls skin together until it heals (the cat needed skin grafts for its serious injury), helps keep out infection and stabilizes the body temperature.

The surgeons who healed the wounded cat reported: “Vacuum-assisted closure is a useful, easily applicable technique for open and grafted wounds, even when

wounds are in challenging anatomical locations.”

CatWatch, postering the neighborhood helps a lot), the same researchers asked people who found all those cats what they did next.

As reported in the

Journal of the American Veterinary Medical Association (Vol. 230, No. 12), some concerned cat-finders placed ads in newspapers, checked Internet lost-pet sites, had the cats scanned for identification microchips, and more than 90 percent called local animal shelters to report finding a cat.

Then the researchers asked: What became of the found cats? Happily, most were reunited with their worried owners. Others were adopted by the people who found them. But a small number (around 8 percent) were taken to animal shelters, where owners might reclaim their lost pets.

That puzzled the researchers, and they asked: Why not? Because everyone knows the cats will be euthanized there, people answered again and again.

Not so, the researchers noted in the journal report. In fact, fewer than 12 out of every 1,000 pets turned in to animal shelters in the study area (the Midwest United States) are ever euthanized. More shelters these days are adopting so-called no-kill policies, and most make every attempt to find new owners who want a good pet. “It is important to educate animal finders both on the various methods that are available and on the role that shelters can play in reunification,” the researchers concluded.

Beside us, of course, no one dotes more on pets than the Brits. So its not surprising to find U.K. lawmakers leading the way, internationally, with super-tough animal-cruelty penalties. As a result of Englands new Animal Welfare Act, which went into effect in April, neglectful owners and animal abusers face fines of up to 20,000 pounds sterling (thats about $40,000 in U.S. dollars), as well 51 weeks in jail and a lifetime ban on owning pets.

In the U.K., at least, youre now considered cruel if you dont provide pets with a suitable environment and diet, the ability to behave normally, the ability to be housed with or apart from other animals (as is best for the pet), and protection from pain, suffering, injury and disease.