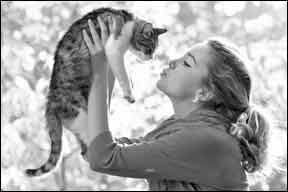 A survey of more than 50,000 U.S. households has uncovered a puzzling disconnect between cat owners’ beliefs and actions. Owners in 2011 said they increasingly consider their cats family members — 56 percent, up from 49.4 percent in 2006. Yet just 27.1 percent of owners say they took their cats to the veterinarian only when they were sick.

Given that the feline population in the U.S. is approximately 74.1 million, about 20 million pet cats went without regular checkups and care in 2011. “The love for a family pet doesn’t always translate into visits to the veterinarian — visits that can lead to a longer and healthier life,” says the American Veterinary Medical Association, which reported results of its survey in its “2012 U.S. Pet Ownership & Demographics Sourcebook.”

The survey, which is conducted every five years, also found that:

If so many cats see the veterinarian only when they’re ill, chances are many are getting sick when they don’t need to be, said AVMA President Doug Aspros, DVM. “The human-animal bond is stronger than ever, but we are very concerned that pets may not be getting the preventive health care they need. What’s important to remember is that preventive pet care can help save you money. Potential health problems can be diagnosed early — and costs can be reduced — if our pets visit the veterinarian on a regular basis.”

Where the Cats Are

More than 485,000 pets are insured by Veterinary Pet Insurance. Of those, only 65 cats are registered under the name of Fluffy. Owners today seem to prefer people names for pets, at least the insured ones. The top five cat and dog names in 2012 were also among Baby.com’s 100 most popular names that year. The top cat names, according to VIP:

Bella also topped the list of dogs’ names, and Charlie was No. 1 for birds and exotic pets. Winning honors as the wackiest cat name: Pico de Gato.