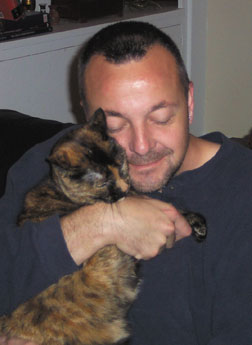 Cat owners are often concerned about neutering their male or spaying their female cat. One question they sometimes ask is whether the surgery will change their family cats character and behavior. On this, veterinarians are virtually unanimous: Change will be significant, but it is all to the better.  In my way of thinking, it should be done for every cat, says James Richards, DVM, director of the Cornell University Feline Health Center and Editor of CatWatch.

One Exception
The only exception to this rule may be a pedigreed cat of such genetic quality that he or she is kept for breeding purposes. However, regardless of the cats gender, it will be more affectionate, pleasant to be around and people-oriented once it is neutered.

Neutered males are much less likely to spray pungent urine either inside and outside the house. (Intact males use this behavior to establish territory and to attract females.) They will be much more affectionate to you, and without the urge to breed, they will no longer roam – which they sometimes do for several days at a time – when looking for females to mate with.

Outside, they are in harms way and in a much more high-risk lifestyle, says Dr. Richards. Roaming the outdoors, cats are exposed to infectious diseases as well as potential fights with other animals, all of which threaten the cats health and longevity and do nothing to improve his position as a family companion.

A further benefit is that they will be much less likely to get into fights and they will not disturb the family peace by frequent howling, both day and night, to attract females. Without neutering, hes a roommate thats a lot harder to deal with, notes Dr. Richards.

No More Estrus
For females, spaying will end the heat cycles (estrus) and the insistent, often irritable behavior patterns those trigger. This includes aggressive efforts to escape the house to find a male cat; restlessness; and rolling, crouching, howling and occasional urine spraying. And like the effect of neutering on males, your female cat will have much more interest and time to nurture affectionate relationships with her human family once the hormonally driven need to breed is removed.

Do It Early
Neutering is commonly done at about six months of age, according to Dr. Richards. Many veterinarians are now performing the procedure on kittens between eight and 14 weeks old, and research has found no negative effects of these procedures when carried out at this earlier time.

Waiting for your cat to reach full maturity before neutering risks pregnancy for the female and urine spraying in the male, which – once established – is often not eliminated by castration. Some people falsely believe that females should be allowed to have one litter of kittens before they are spayed, but there is absolutely no advantage for a female to do so.

A feline tragedy is that, in the United States alone, millions of cats and kittens are euthanized each year because there is no one to care for them. Dr. Richards says that additional advantages of spaying females before puberty are the near elimination of mammary cancer, which is an otherwise significant threat, and reductions in several types of uterine diseases, which can also be life- threatening.

Fat Cats?
One side effect of neutering males and spaying females can be weight gain. This can be controlled by not overfeeding and by encouraging your cat to be more active. But you will have to play with her more often to keep her active.

The Procedure
For males: Your veterinarian will put your cat under anesthesia, make two small incisions in the scrotum and remove both testes, as well as a part of the two vasa deferentia, the tubes that carry the sperm. No stitches are needed, and your cat can return home the same day.

For females: Your veterinarian may use a longer-acting anesthetic, since this operation is more complicated and requires stitches to close the incision at the abdomen. Here, the veterinarian removes the ovaries, the uterus and the two oviducts, the tubes that carry eggs from the ovaries to the uterus. Many females are sent home the same day. While they may lick at the stitches, in most instances the incision heals normally and no bandages are needed.

One last bit of good news: Even a spayed cat loves to chase mice.